Students march on campus in protest, solidarity with Kenosha 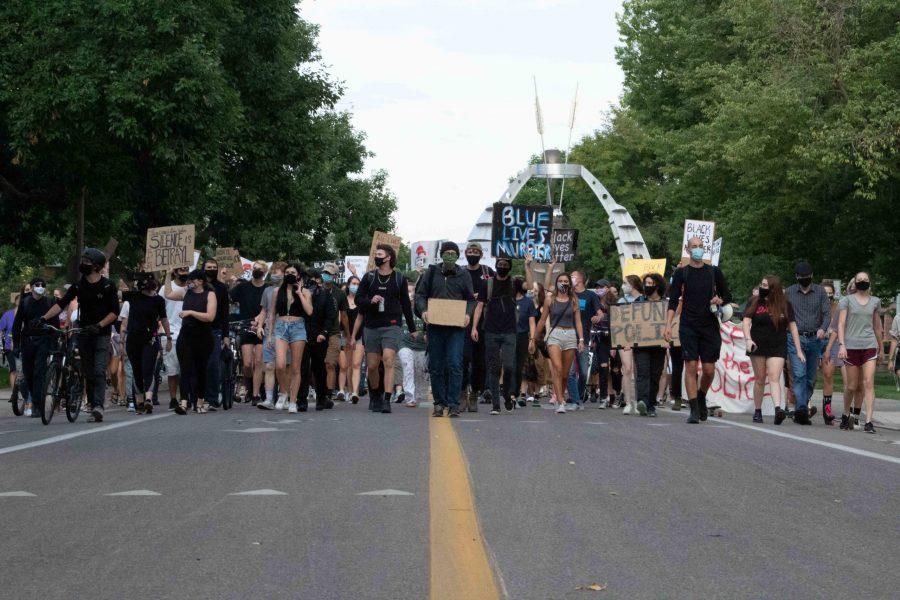 Three days into this semester, Colorado State University students are voicing their concerns surrounding racial injustice on campus and across the country.

Hundreds of students gathered at The Oval Wednesday evening to march in solidarity with protesters in Kenosha, Wisconsin, after police shot 29-year-old resident Jacob Blake in the back seven times.

“I’m from Kenosha,” one student speaker, who wished to remain anonymous, told the crowd. “My family still lives out there. And having to call in the middle of the night and asking if they were okay (was) one of the worst things.”

The speaker described the fear that came with seeing both an incident of police brutality and the murder of multiple protesters tear through their hometown.

“Panicking, seeing the pictures, seeing the video and just knowing that it can happen anywhere, even in the smallest of towns in this country,” the speaker said. “Especially the small towns. Nobody is safe. You can be at a birthday party checking on your children, and they’ll still kill you. It’s f*cked.”

Organized by the Colorado State Young Democratic Socialists of America, the event, originally expected to draw only a handful of protesters, saw hundreds march the perimeter of campus south along East Drive and west down Pitkin Street.

As the march reached Braiden Hall, chants of “out of your dorms and into the streets” drew more students into the crowd, met with cheering from demonstrators. Numerous first year students joined the protest, describing it as their first major campus experience since arriving.

Here is a student from Kenosha describing their experience hearing about the shooting of Jacob Blake. https://t.co/UraieiMDav pic.twitter.com/fJckymzFgL

“I hadn’t been to any protests before,” said Jamal, a newly-arrived first year from Texas who wished to keep his last name anonymous. “I personally haven’t felt discriminated against here, but one city isn’t enough. It’s bigger than just here. Until there’s change everywhere, equality here means nothing.”

Multiple organizers and protesters spoke on demands to defund the CSU Police Department, citing funding as excessive and reiterating demands from racial justice organizers across the country.

Especially the small towns. Nobody is safe. You can be at a birthday party checking on your children, and they’ll still kill you. It’s f*cked.” -an anonymous student speaker

“At a certain point, (campuses) do need to have security, but they don’t need to have a full-fledged police force if they have things like (resident assistants) in place to help students out when need be,” Gonzalez said.

This protest is the first for the school year, but follows the weeks of protests and rallies organized by the BIPOC Alliance and Fort Collins People’s Initiative for Equity after the death of George Floyd.

One June event, organized by #NotProudToBe, a group that formed after the blackface incident last fall, asked for defunding of CSUPD at the budget town halls hosted by President Joyce McConnell.

One prominent organizer, Rob, who requested to be known only by their first name, voiced their doubts about campus action in addressing student demands surrounding defunding.

“The (CSU) administration cares more about the illusion of … liberal processes in the sense of people assembling, people being polite and debating,” said Rob. “They will let us march all they want, but they will never listen to us.”

Among the crowd was Assistant Vice President of Student Affairs and Dean of Students Jody Donovan, who said she attended the protest because she wished to support student voices.

“Black Lives Matter is an important issue, and with what’s going on around the country, we need to lift up these voices,” Donovan said. “I’m aware of conversations about revisiting the role police play on campus and when it’s appropriate for them to respond to an incident.”

The crowd was met at the CSUPD building with counterprotesters who drove past multiple times, rolling coal on the protesters.

“I’m a student from a small town where the cops are known for being horrible to people, so I’m just glad there’s an actual protest going on,” said first year student Sage, who wished to keep her last name private.

After chanting, “Hey, hey, ho, ho, these racist cops have got to go” outside of the CSUPD building for nearly 30 minutes, the march continued east along Laurel Street, blocking traffic on the way back to The Oval.

Serena Bettis and Sam Moccia can be reached at news@collegian.com or on Twitter @serenaroseb and @samuel_moccia