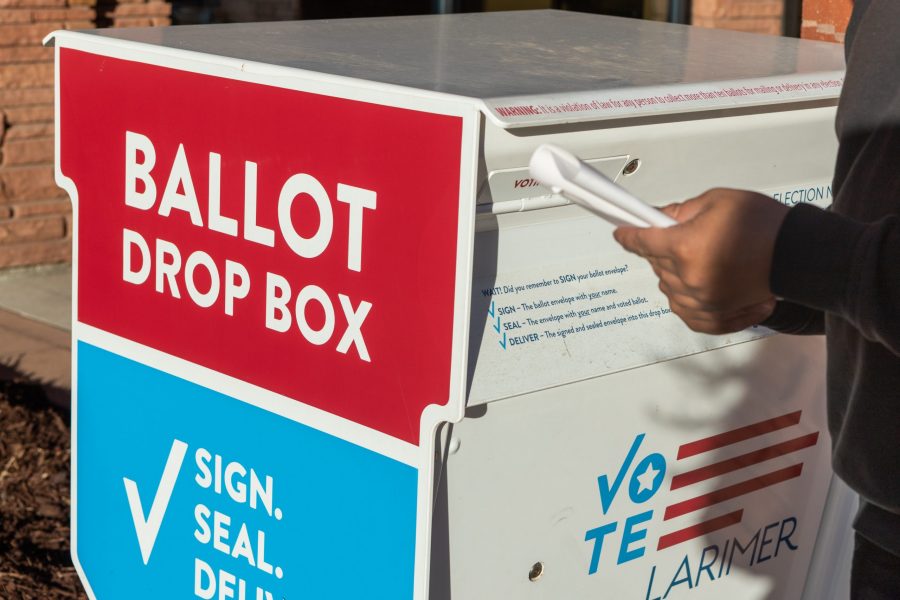 Fort Collins residents can use the ballot box outside the Larimer County courthouses building to deliver their ballots. (Photo illustration, Brooke Buchan | Collegian)

Gordon McLaughlin is the Democratic candidate for the 8th Judicial District attorney position, which covers Larimer County and Jackson County.

Having served as a deputy district attorney in the district for roughly seven years, McLaughlin said he has seen both the good and the bad of the current office. Now he’s running to lead the office to tackle over-incarceration with equity reforms, establish transparent public engagement and direct more resources to serious crimes.

McLaughlin said the system currently and unfairly favors those privileged through factors like income or race.

“When people see that, it erodes trust in the whole system,” McLaughlin said.

One major example he intends to reform is the cash bail system.

When a judge sets a cash bail on a defendant, that person must post that amount or pay a bondsman to post an amount to get out of custody, according to The New York Times. If a person cannot pay the cash bail, they will sit in prison awaiting their trial, sometimes for months or years.

“That’s simply an unjust system,” McLaughlin said. “We’re not keeping folks in custody due to any high risk; we’re getting them in custody because they can’t pay to get out, and that’s not fair.”

The DA’s office gives input on the cash bail amount or can recommend that the defendant is released with supervision when they pose no safety concerns to the community, McLaughlin said. He intends to take a nuanced look at their recommendations to reduce reliance on cash bail.

Other reforms McLaughlin intends to focus on include diversion programs and more rehabilitative, less punitive sentences.

It became clear to me that it was a very complacent system and that the goal was to continue to be complacent. I was tired of seeing us fall behind our neighboring counties in some of these approaches and decided that it needed to be changed, and so I stepped up to change it.” -Gordon McLaughlin, candidate for 8th Judicial District attorney

The current DA’s office has done a good job dealing with serious crime, McLaughlin said, and his solutions would give those cases more resources.

“The way we do that is by diverting lower-level cases,” McLaughlin said. “Not only does that help us focus resources, but again, that keeps us safer as a community because if we are holding folks accountable in ways that are addressing those underlying problems, then we’re reducing recidivism and keeping us safe.”

It is important that everyone has equal access to those rehabilitative treatments regardless of race, income or gender, McLaughlin emphasized.

“We need to create a system where we’re aware of the historic injustices that do exist in the criminal justice system, and we’re working every day to try to fix those so that everyone is treated the same,” McLaughlin said.

As part of the equity reform, McLaughlin wants to significantly improve public engagement and transparency — for example, releasing data on sentencing outcomes to see if more punitive sentences truly work.

He criticized the DA’s office for their lack of public outreach the last eight years as compared to other elected officials who regularly host town halls and have social media communications.

“It’s the responsibility of public servants to go to the people, not the other way around, and they’ve simply never done that,” McLaughlin said.

As the first Democratic challenger to the DA’s seat in about three decades, McLaughlin intends to bring change to the district office.

“It became clear to me that it was a very complacent system and that the goal was to continue to be complacent,” McLaughlin said. “I was tired of seeing us fall behind our neighboring counties in some of these approaches and decided that it needed to be changed, and so I stepped up to change it.”

His opponent is Mitch Murray. Read more about both candidates and this first-contested DA race since 1992.