Oval rally of resistance calls for independence for all 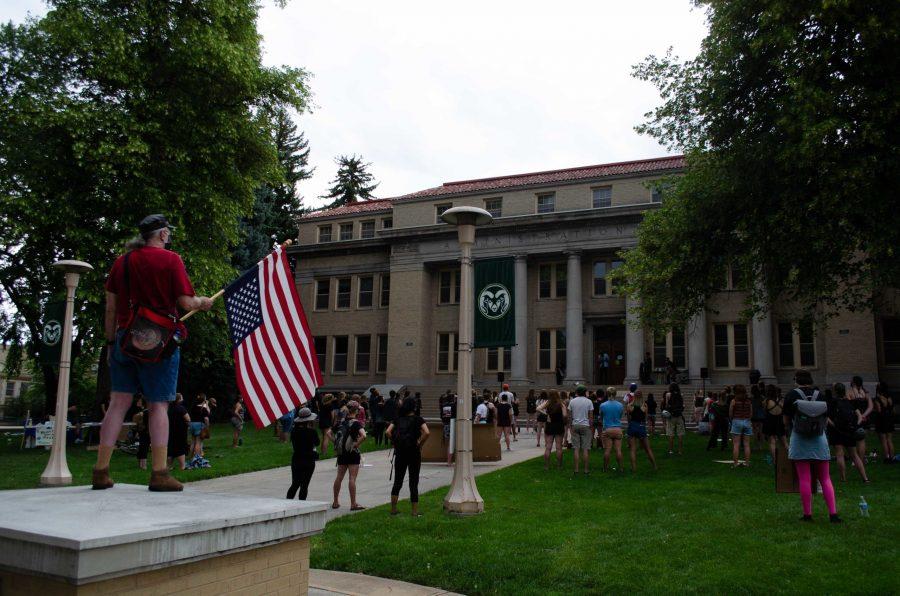 A man with an upside down American flag stands on a pillar outside the Colorado State University Administration Building. (Reed Slater | The Collegian)

With communities across the United States frequently protesting for equality and Black lives, celebrations on Independence Day are taking a new form.

Over 50 people gathered at The Oval July 4 for a rally of resistance organized by the People’s Initiative for Equity in Fort Collins and Queen’s Legacy Foundation.

“To this event specifically, I came here because the real independence day should be Juneteenth, in my opinion, because that’s when independence was for everyone in our country, not just white males,” said Cella Force, a recent graduate from the Poudre School District.

The afternoon rally consisted of speeches from community members, a march from The Oval that went down College Avenue and Mulberry Street and a community discussion regarding decolonization and liberation.

Ciara Wilson, a rising senior at Liberty Common High School and an organizer with FoCo PIE, read an excerpt of the 13th Amendment to start the rally. She read a section of the amendment that states, “except as a punishment for crime whereof the party shall have been duly convicted” allows slavery to still exist in the U.S.

“These words establish a justification for slavery within our country and undoubtedly incentivize the criminalization of Black, Indigenous and people of color in our communities,” Wilson said. “We cannot rightfully celebrate independence from tyranny and oppression while so many are still bound in chains.”

Queen, community organizer and founder of Queen’s Legacy Foundation, encouraged the crowd at The Oval to keep up the momentum of change and to bring 10 people with them to the next rally they attend.

“We need to do better as a community,” Queen said. “We cannot wait for the people in power to do a damn thing for us because they’re not. But this community right here, we’re gonna change things. We are gonna make things the way we wanted to, for our children now and in the future.”

Julius Philpot, a Colorado State University alumnus, spoke on the many ways people can protest, his own reasons for protesting and what white allies can do to support Black Lives Matter.

The first thing people can do is educate themselves and put themselves in situations where they are uncomfortable, so they can have even the slightest idea of what it feels like to be Black in the U.S., Philpot said.

Philpot also suggested that white allies do not leave their protest signs in a hidden spot, that they speak up when they witness racist acts and tag their cars with Black Lives Matter language.

“What it does is for one split second as you drive out of your house feeling uncomfortable, not knowing who’s with you and who’s against you, you for a split second have an understanding of feeling what it’s like to be Black and being judged by the exterior, not by the interior,” Philpot said.

We cannot wait for the people in power to do a damn thing for us because they’re not. But this community right here, we’re gonna change things.” -Queen, founder of Queen’s Legacy Foundation

Wilson said that, with everything going on recently, she believes Independence Day is not a day worth celebrating; it is a day worth protesting.

“This hurt and this history of the oppression of Black people is not a concept that’s understood in Fort Collins,” Wilson said.

Wilson told the crowd that, as a student in the PSD, she sees students in the school district openly saying the N-word, laughing about it and not understanding the ignorance of the word.

“This is why we have to be here at events like this because that ignorance is destroying our country,” Wilson said. “That hurt behind that word, and for those specific people to be okay with that in their minds, is something that isn’t right and something that we as a community have to start standing up for, all of us.”