The Rocky Mountain Collegian • May 9, 2020 • https://collegian.com/articles/news/2020/05/category-news-what-to-know-about-the-fort-collins-mask-wearing-ordinance/

What to know about the Fort Collins mask-wearing ordinance 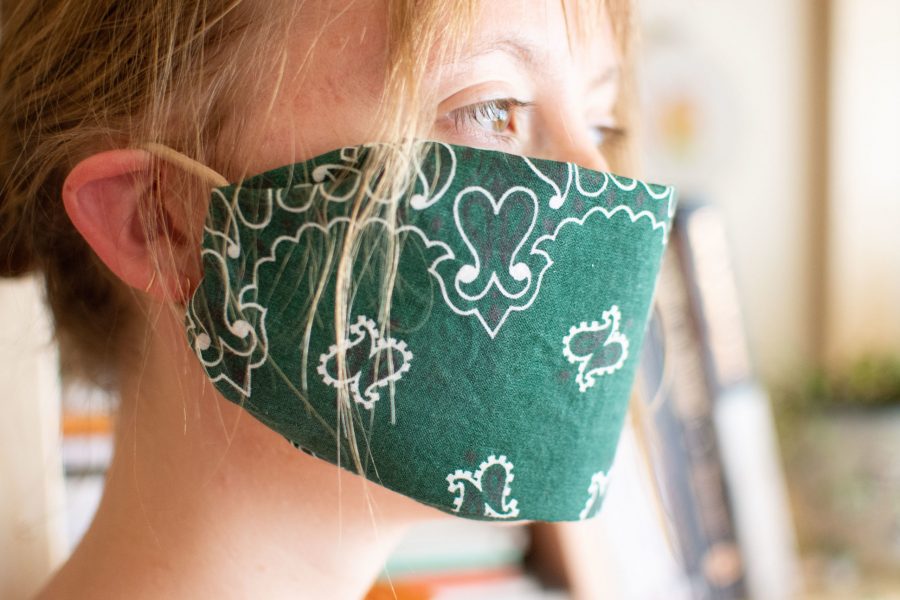 Following instructions on the Center for Disease Control's website, a reusable cloth facemark can be made at home from a bandana, a coffee filter, two hair ties and a pair of scissors. (Matt Tackett | The Collegian)

Fort Collins City Council approved a modified emergency ordinance Tuesday requiring most residents age 10 and over to wear a face covering inside most enclosed spaces open to the public.

The order, which the City manager put into effect on May 5, is meant to hinder the spread of COVID-19 now that stay-at-home orders have lifted. It has a tentative end date of May 30 to match Larimer County’s mask order, but it could be extended depending on how the pandemic evolves.

Here’s what to know about the ordinance.

Anyone age 10 and over is required to wear a facial covering in the following locations:

Retail and commercial businesses open to the public, including outdoor seating areas of these businesses
On-site service providers open to the public
Any City of Fort Collins building or facility
Any public transportation, including City Transfort buses
Any other public indoor place where 6 feet of social distancing is not possible

Masks are not required for simply being outdoors or in open spaces.

The Larimer County mask requirement is similar but applies to anyone over the age of 1. In the case where there are differences between locality requirements, residents are asked to follow the more stringent measures.

Businesses are required to hang up signs in English and Spanish alerting patrons to the City ordinance. They must also make reasonable efforts to provide face coverings for employees.

People are exempt from wearing masks if they have documented medical concerns like breathing issues.

Masks include any hands-free material covering a person’s nose and mouth, such as bandannas, medical masks, cloth masks and gaiters. The Centers for Disease Control and Prevention provide further guidance on how to use cloth face coverings. To be effective, they should be regularly washed and not touched while wearing them. Surgical masks and N-95 respirators should be left for medical professionals.

How will the ordinance be enforced?

Council lowered the ultimate penalty for violating the ordinance from a criminal misdemeanor to a civil infraction. However, the City will take a more educational approach rather than putting it on law enforcement, according to City leaders.

“I think this (is) intended to be mainly through education and information and also through accountability that we have to each other,” said Darin Atteberry, City manager.

Councilmember Ken Summers, the lone vote against the emergency ordinance, said since residents have been cooperative so far, “a hammer of enforcement” is not the right way to get their support on wearing a mask. He suggested an unenforceable resolution recommending residents wear facial coverings.

Council ultimately kept the ordinance so enforcement would still be possible.

I think this (is) intended to be mainly through education and information and also through accountability that we have to each other.” -Darin Atteberry, City manager

Businesses may request a violating patron to leave the premises, and if the patron refuses to comply, then the patron will be guilty of a civil infraction.

Under the finalized ordinance, businesses will not incur penalties for allowing someone to remain without a face covering, according to the City news release. Businesses are still required to hang up signs informing people of the ordinance but are not required to ask patrons to put on masks.

Business employees are also not expected to make customers wear a mask. Councilmembers had expressed concern about possibly burdening employees with that responsibility, since mask requirements have elicited some strong emotional responses compared to other health orders like smoking bans.

In one incident, a Michigan Family Dollar store security guard was shot and killed after telling a woman that customers need to wear face masks in the store, according to the New York Times.

What is the point of the ordinance?

The purpose of wearing cloth masks is to prevent the spread of respiratory droplets when a person coughs, sneezes or talks, according to the CDC. Those droplets are thought to transmit COVID-19, which has caused over 75,000 deaths in the U.S.

Homemade masks don’t necessarily keep infected droplets out, but they do keep droplets in, according to the Mayo Clinic. While the CDC previously recommended only people with symptoms wear masks, new research shows that some people with COVID-19 are actually asymptomatic, meaning they show no signs of sickness.

The City ordinance comes as a blanket precaution to ensure asymptomatic carriers are minimizing the chance of infecting the people around them.

Such measures have become relevant now because the state stay-at-home order was lifted on April 27, and nonessential businesses have slowly reopened to public foot traffic.

“We have heard from businesses that many of them want to be able to protect the health and safety of their workers, and this actually does give them a tool to be able to require a patron (to wear a mask),” said Honore Depew, policy and project manager. “They don’t want to be the bad guy; they want to be able to point to a sign on the wall.”

Mask orders across the nation have been met with varying degrees of resistance, but several councilmembers maintained that the ordinance is still within their authority as a public health order regardless of the politicization of the issue.

“It’s not about trying to infringe on anybody’s rights, but it’s seen as that way, and some people are angry about that, and people are entitled to their own opinion,” Mayor Pro Tem Kristin Stephens said about the ordinance. “But at the same time, there’s no reason to suggest that we can’t provide laws that protect people’s health.”