The ghost of Hughes: A timeline of the historical stadium 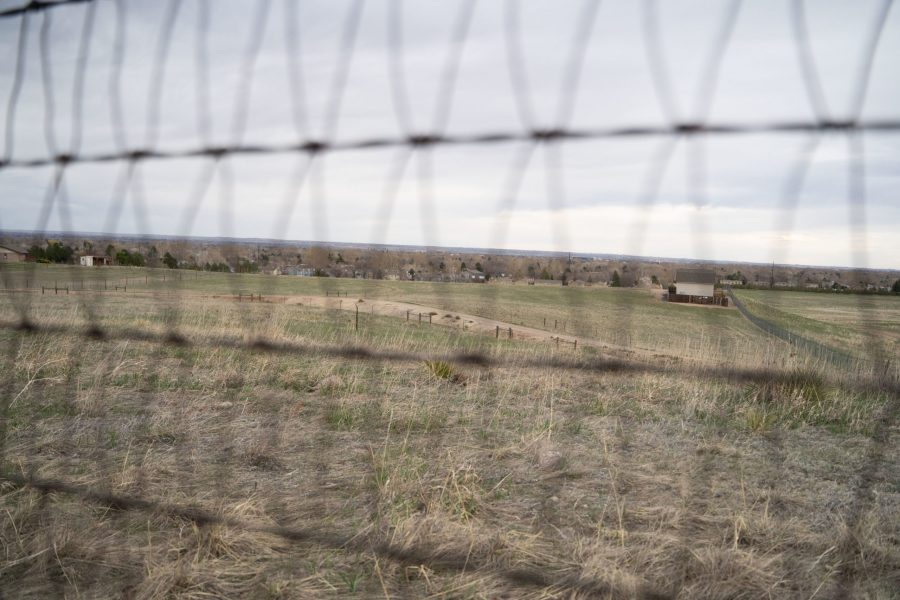 The current area where Hughes Stadium used to be. (Brooke Buchan | The Collegian)

For today’s students, Hughes Stadium is little more than a historical memory which once occupied the now empty plot of land near the Aggie “A” painted on the foothills. But for Colorado State University, half a decade of controversy went into its demolition, and years later, heated discussion about the area’s future still draws hundreds to City meetings. To fully understand the emotions surrounding the ghost of Hughes requires looking into its past.

The following article is a complete aggregation of the Collegian’s coverage from 2012 to 2020 regarding the Hughes Stadium property. The interactive timeline captures major events only. View the timeline on mobile.

Goodbye to Hughes: How Colorado State University decided to replace the decades-old stadium

Jan. 30, 2012: Save Our Stadium CSU Facebook page is launched, a vocal opponent of a new stadium.

May 30, 2012: Throughout the spring semester, the Stadium Advisory Committee worked to put together a proposal for then CSU president, Tony Frank, about the possible new stadium’s location between Pitkin and Laurel and cost, which would be $220 million for the stadium and $246 million when including other facilities. They presented findings at a public meeting but were not completely done with their investigation by May 30. Frank pushed back his final decision to the fall semester.

June 18, 2012: Both supporters and opponents of the potential Hughes replacement continued to voice their opinions over the summer. The Committee continued to investigate the possibility of building a new stadium through the summer as well as its ramifications for Hughes.

July 17, 2012: The Coloradoan investigated two dozen emails between members of the CSU administration, showing little focus on renovating Hughes and more ideas for a new stadium. CSU responded that there are “existing plans for expansion and renewal.”

July 26, 2012: A majority of CSU students don’t support an on-campus stadium, according to a survey of over 3,500 students conducted by the Associated Students of CSU.

Aug. 1, 2012: Frank hosted a public forum about the stadium issue, one of the last chances for public input. It lasted four hours.

Aug. 19, 2012: The Collegian Editorial Board endorsed the development of an on-campus stadium.

Oct. 1, 2012: Frank announced that the University will explore options for an on-campus stadium to propose to the CSU System’s Board of Governors within the next two years. He intended to fund 50% of the project from private donations and said that “general funds, student tuition or fees or proceeds from any tax shouldn’t be used to finance the stadium.” If a viable funding plan fell through, they would look at renovating Hughes for a minimum of $30 million, Frank wrote.

Oct. 2, 2012: Opposing group Save Our Stadium Hughes says they will continue to fight the decision. Supporter group, Be Bold, says they will help with stadium fundraising efforts.

Dec. 12, 2012: CSU hires new senior associate athletic director, David Crum, whose main job will be to raise donations to fund the University’s new on-campus stadium. The plan is to raise at least $110 million in donations — to fund the estimated $246 million project — and pay the other half in bonds.

Feb. 25, 2013: CSU went silent about stadium fundraising efforts as they collected from big donors first. The Board of Governors marked October 2014 for when they wished to see a report about the donations.

Oct. 3, 2013: Discussion of the on-campus stadium plan incorporated discussion of adding at least 55,000 square feet of academic facilities to the building for the cost of $17.5 million.

Oct. 15, 2013: City Council has its first public discussion over the on-campus stadium. Their opinions are all over the board.

April 2, 2014: Frank said they have less than half of the desired $110 million private funding for the stadium that they had hoped for.

July 10, 2014: Developers of on-campus stadium say light and noise emitted from the stadium will be directed north toward residence halls and other academic buildings on campus but will shield nearby neighborhoods.

Aug. 8, 2014: Frank fired Graham due to “substantial differences” between their views but emphasizes that it has nothing to do with the stadium. Graham said his firing was “surprising.”

Aug. 24, 2014: Two years after deciding to pursue new stadium funding, the University fell short of the $110 million Frank intended to put into the $220 million idea.

Sep. 25, 2014: Frank announced that he wants an additional two months to explore other options for funding the on-campus stadium, as private donations fell short. He proposed several options: 1) renew Hughes as needed; 2) renovate Hughes for long-term; 3) build the new on-campus stadium in phases; and 4) rebid on the on-campus plan as a public-private partnership.

Oct. 2, 2014: CSU Board of Governors postponed their vote on the stadium, giving Frank more time to analyze his options.

Nov. 18, 2014: CSU hosted Hughes Stadium tours to show the community what it would take to renovate the building. It had glaring issues with seating, wheelchair accessibility and it could only host football games.

Nov. 19, 2014: The athletics department, Facilities and two CSU committees all recommended building an on-campus stadium instead of renovating Hughes Stadium, using either option 3 or option 4.

Nov. 29, 2014: Frank recommended the construction of an on-campus stadium. He released his decision the Saturday before the official BOG meeting.

Dec. 5, 2014: A majority of CSU students supported renovating Hughes over building a new stadium, according to a survey conducted by ASCSU where over 800 students responded.

A Stadium on Campus: The buildup of Canvas and tearing down of Hughes
Spring 2015

Jan. 26, 2015: The state Legislature’s Capital Development Committee was set to vote on Frank’s plan to borrow $220 million in revenue bonds for the construction of an on-campus stadium. Sen. John Kefalas of Fort Collins had concerns about the University’s debt.

March 24, 2015: CSU System sold $239 million in bond sales for construction of the new on-campus stadium, according to a press release. The bonds sold in less than 90 minutes.

May 18, 2015: About 10 CSU students and one Fort Collins resident gathered at the new stadium site to protest preparation for its construction.

May 20, 2015: Meridian Avenue is closed as preparation for stadium construction began.

June 19, 2015: The BOG approved adding an $18.5 million alumni center and academic addition to the stadium.

Oct. 14, 2015: CSU remained unsure about what to do with the old Hughes Stadium. The City and CSU started a discussion about its uses, instead of leaving it empty as a fallback.

July 7, 2016: CSU kicks off “Farewell Hughes” campaign to be held during the 2016 football season

July 16, 2016: CSU reports $22 million in stadium funding during its most successful fundraising year yet.

Aug. 2, 2016: Structural construction of the on-campus stadium was completed.

July 24, 2017: Single-game tickets for the inaugural football game at the new on-campus stadium are officially sold out.

Aug. 5, 2017: Fans gathered to see the grand opening of the stadium to the public.

Aug. 26, 2017: The football team wins their first game in the new stadium against Oregon State.

Oct. 5, 2017: The BOG votes unanimously to demolish Hughes Stadium for an estimated cost of $4-6 million.

Oct. 17, 2017: Residents give input to what should be done with the old Hughes land at one of many Hughes Redevelopment Listening Sessions.

Spring 2018: Planned for the summer, Hughes Stadium was approved for demolition for $5.5 million.

The Ghost of Hughes: What is being done with the land previously known as Hughes Stadium
Spring 2019

July 18, 2019: City Council took the unusual move of initiating the rezoning of the Hughes’ land. That means Lennar cannot feasibly move forward with development proposals until the Council decides what kind of zoning they want for the area.

Sep. 23, 2019: The Fort Collins Planning and Zoning board recommends a low-density residential zoning for the Hughes Stadium site, at the urging of many resident comments.

Nov. 6, 2019: City Council approves zoning the land with a higher density portion. This was suggested by staff and previously voted against by the P&Z Board. Attending residents were overwhelmingly against Council’s narrowly voted-in choice. To finalize the vote, Council must approve it again at a second hearing.

Nov. 20, 2019: The second hearing of the Hughes rezoning is delayed after two residents file an ethics complaint against councilmembers Mayor Wade Troxell and Mayor Pro Tem Kristin Stephens over their employment at CSU.

Dec. 16, 2019: The Ethics Review Board cleared Troxell and Stephens of the complaint, saying the complaint did not warrant further investigation.

Jan. 21, 2020: The second hearing of the Hughes rezoning is delayed again after a different resident filed an ethics complaint against councilmembers Troxell, Stephens and Ken Summers.

March 8, 2020: The Ethics Review Board decides to initiate an investigation into Summers over his lobbying business. They cleared Troxell and Stephens again.

Mar. 13, 2020: The Ethics Review Board clears Summers of any conflicts of interest.

March 17, 2020: Several councilmembers had to self-quarantine from exposure to COVID-19, delaying the second hearing of the Hughes rezoning.

May 19, 2020: Council deadlocks 3-3 on finalizing the rezoning decision. Stephens recused herself from the vote after a third ethics complaint was filed against her and Troxell at the state level. No decision was made about what land use zoning to give the old stadium land.

June 15, 2020: Frank, no longer the CSU president but still the CSU System Chancellor, was expected to discuss the Hughes development at the Aug. 4 City Council meeting, according to reporting from the Coloradoan.

July 21, 2020: The City considers purchasing some or all of the Hughes land, according to reporting from the Coloradoan. The rezoning discussion and Council discussion with Frank is postponed.

Aug. 24, 2020: Citizen group PATHS (Planning Action to Transform Hughes Sustainably) submits a ballot measure to make the City of Fort Collins purchase the Hughes land for open space, according to reporting from the Coloradoan. They need to obtain 3820 valid signatures to put it on the April 2021 ballot.