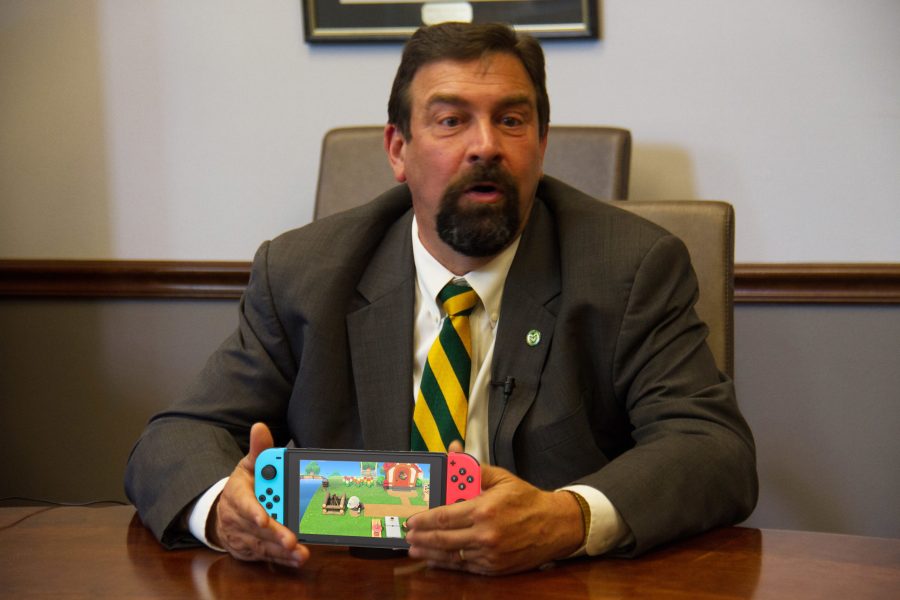 A frightened Tony Frank answers questions after being found hiding in a closet playing "Animal Crossing" on his Nintendo Switch. (Smack Attackit | The Wake Up Slap)

While Colorado State University administration scrambled to address questions and concerns from worried students and the campus community, one prominent figure was unable to be found for several weeks: Chancellor of the CSU System and former University President Tony Frank.

“I thought it was kind of weird that we hadn’t seen T. Frank anywhere during this,” said freshman theater major Angela Nook through a protective layer of 6-inch glass. “I mean, if any time there was a need for the mighty and all-powerful beard, now was that time.”

But it was this beard that was the reason for Frank’s absence during the beginning of the COVID-19 pandemic — that and a really great deserted island.

On Monday, Frank was found hiding in a basement closet in the Administration Building with a Nintendo Switch, a copy of Animal Crossing: New Horizons and enough rations to withstand even the coldest of winters. A University employee located Frank after hearing manic giggling through the basement halls.

“It was like finding a kid playing hide-and-seek; he almost immediately slammed the door closed and whispered, ‘Nobody is home,'” said Kevin Remmington, the employee who found Frank. “But I’ll give him this; he has a damn good start on his island.”

When questioned, Frank said that he is currently working his hardest to finish off a few bridges in his town, as well as check in on all of his villagers.

“This is a time of great concern and worry for me, and I’ll be honest; I am as scared as everyone else,” Frank said. “I mean, if I want to get all of this construction done in Frankopolis, then I am really going to need to bust my a**, and this damn sea is going to need to give me something besides f*cking sea bass.”

Frank added that hiding in the basement of the Administration Building was the only “true safe place for the beard and the only place it’s protected.”

When the news got out to students, many responded with great respect for Frank and asked politely for his friend code.

“I mean his island has to be kick-a**, right?” said Julia Emerson, an avid Animal Crossing fan. “I have already constructed multiple paintings on my island that are really just zoomed-in photos of his beard. It’s like the damn Louvre out there.”

With social media abuzz with the news that Frank was hard at work flowering his virtual garden, a large group of students began to ask questions about what current University President Joyce McConnell was doing during this time.

In an exclusive interview with The Wake Up Slap, McConnell revealed that she had taken a few days break from Animal Crossing to try and finish off the last few levels of DOOM Eternal.

“I swear to God, I am going to lose my mind if I don’t finish the Taras Nabad level today,” McConnell said through a mouthful of Cool Ranch Doritos and Mountain Dew Game Fuel. “I feel like I am losing every shred of sensible intelligence I have gained over the years. This game is my white whale, and I’ll be damned if I let it win.”

McConnell added that she plans to power through Dark Souls III with a Guitar Hero controller in the coming weeks and asks worried and confused students to watch her Twitch stream, known as MCRammy Games.