#NotProudToBe plans to push University to action this semester 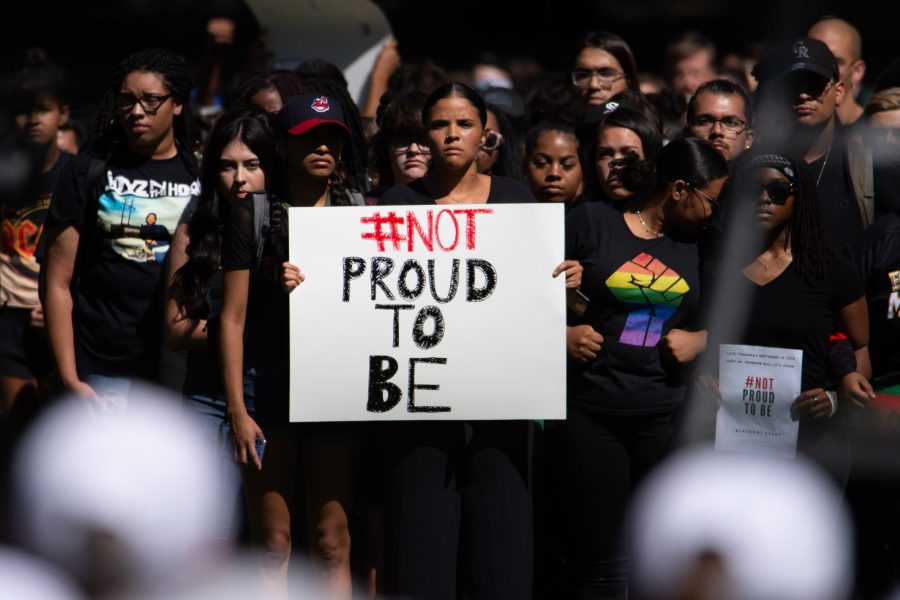 Members of the #NotProudToBe blackout event stand in front of the stage as President Joyce McConnell gives her 2019 Fall Address Sept. 19. (Matt Tackett | The Collegian)

#NotProudToBe emerged in 2019 following the blackface incident on campus in the fall. Their first major appearance was the silent protest at the Presidential Address.

This past Monday, both undergraduates and graduates attended a meeting hosted by the organization.

Micaela Parker, Marcela Riddick and Janaye Matthews worked collaboratively to create #NotProudToBe. As seniors in their last year at Colorado State University, they have seen several bias-related cases in which CSU responded with an email and nothing more.

In their research on CSU’s past work with bias-related incidents on campus, they found a cycle; a big incident occurs, and the University shares changes they plan to make, but no institutional change is made.

Between August 2017 and October 2019, there have been more than 25 bias-related incidents and a total of seven University responses, according to a College Avenue article. This year, #NotProudToBe is hoping to change this.

We see you. We hear you. We stand with you.

“Colorado State University has cultivated a culture around inaction and complicity regarding bias-related incidents,” states the #NotProudToBe Purpose Statement. “While CSU has been proactive in trying to address these offenses, true institutional change has been absent. We are no longer accepting the claim that nothing can be done. We are calling now for an institutional change within CSU to provide actionable steps to uphold and enforce the Principles of Community.”

The meeting on Monday allowed attendees to hear each other’s voices regarding their experiences and discuss their desires for change at CSU.

There were a dozen students from different backgrounds that discussed their hardships as students of marginalized identities. They were able to discuss each other’s emotions and the intentions of each individual.

The night then went on to share the plans of #NotProudToBe in seeking institutional change and how each student could help.

The organization worked together and wrote a letter of demands to the CSU Administration, intended to voice the negative experiences students of color have had in their time at CSU.

It has been 167 days since we were promised action through the Race, Bias and Equity Initiative. #notproudtobe

Summarized, the demands focus on revisions and improvements to several codes, protocols, trainings and programs already in place on campus. They also ask to increase safety features, mental health education and resources on campus.

#NotProudToBe is dissatisfied with the little that has been done with the new Race, Bias and Equity Initiative President Joyce McConnell began last semester, said Matthews.

Wednesday, Mimi Lewis, an executive assistant at the Office of the Vice President for Student Affairs, sent out an email regarding the RBEI. In the email, the call for proposals is emphasized. However, when the proposals will be implemented is unclear.

The night continued with breakout groups where students collaborated on the letter. The letter was created with the anticipation that students affected by bias-related incidents would be supported.

Daniela Navarro can be reached at news@collegian.com or on Twitter @thedanielazahra.