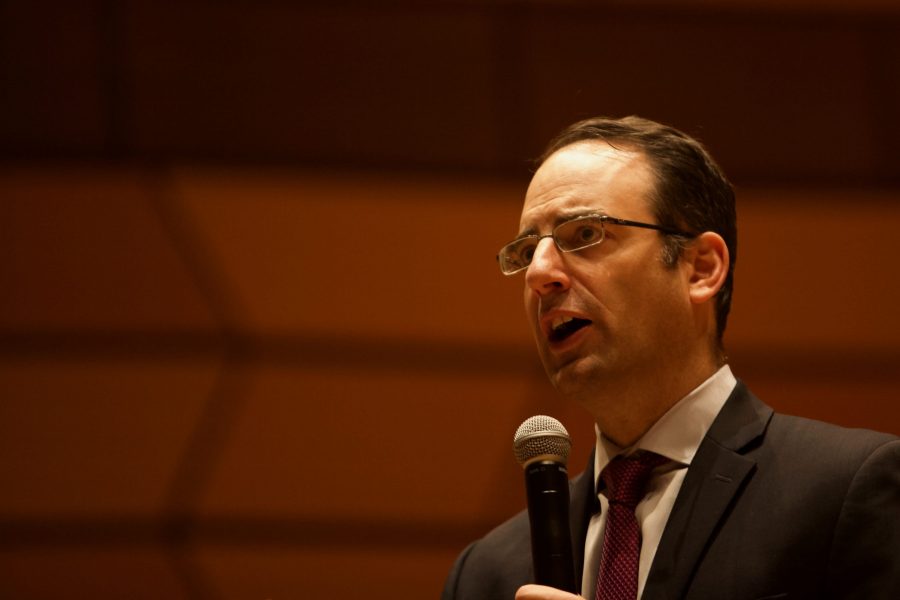 Colorado Attorney General Phil Weiser speaks to students and community members at the University Center for the Arts Nov 5. Weiser spoke and addressed questions about, a republican system of government, politics in the legal field, gun control, water rights, and other issues. (Ryan Schmidt | The Collegian)

As election season fast approaches, it’s time to start discussing Colorado’s future and the effects of the Supreme Court’s decisions on our state.

The Colorado attorney general held an event at Haltzman Law Firm on Thursday to meet with Northern Colorado attorneys and discuss the current political climate, the opioid epidemic in Colorado and the importance of standing up for what you believe in.

“We’re living in a scary time for our democracy,” said Phil Weiser, attorney general of Colorado. “There’s a lot of cynicism and a lot of negativity. I have the good fortune of being a leader here in Colorado where people want to work together and solve problems. That’s the spirit I want to continue to encourage and build on.”

Weiser said he was recently in Loveland to visit the Loveland Community Health Center, home to the Colorado Opioid Synergy Larimer and Weld network.

Weiser said he also visited people representing a range of community groups concerned about the effects the opioid epidemic may have on immigrants.

“A range of groups are concerned about immigrants being targeted and unfairly treated, who are reeling from the public charge rule, which is leading people to give up school lunches and potentially life-saving healthcare,” Weiser said. “We’re in litigation right now to protect immigrants’ rights, including this rule as a real threat.”

Matthew Haltzman, attorney and founder of Haltzman Law Firm in Fort Collins, said he felt it was important to host this event to provide an opportunity for Northern Colorado lawyers to meet with the attorney general and discuss both the issues and the positive things in the community. He said it also felt special because of Haltzman Law Firm’s focus on mental health issues in relation to criminal cases, which includes addiction issues.

The work that we do is about protecting people and defending a constitutional republic that we’ve had for 230 years but aren’t guaranteed to have for more. This is an experiment in American governance. It requires leadership.”-Phil Weiser, Colorado attorney general

“When we have clients that come in who are suffering from addiction issues, it’s not just ‘Let’s put a Band-Aid on this’ and see how we can get you through the court system,” Haltzman said. “It’s also what treatment options are available for our clients and how we can better understand the addiction issues they’re facing. Our goals as a law firm, and I think a lot of criminal defense attorneys in Larimer County, match the agenda of the attorney general, so we wanted to host this for them.”

During his speech, Weiser discussed the rule of law and the importance it has during today’s political climate.

Weiser said the rule of law allows everyone to be treated the same as everyone else no matter who they are. He said it only exists because people believe in it, and it’s important to maintain the rule of law in government.

“We don’t allow prosecutions for the sole purpose of punishing people who do things we might disagree with,” Weiser said. “The First Amendment is committed to allow robust speech and expressive activity, and that is a core commitment I believe in.”

Weiser also discussed the separation of powers and how relevant that is in Colorado.

“It’s a fundamental point that the president doesn’t get to make up whatever budget the president wants; Congress has the power of the purse,” Weiser said.

Weiser said he’s currently in litigation over a case involving President Donald Trump and Congress, who said they wouldn’t fund a border wall. Weiser said the president diverted funds, including from a military installation in Colorado, to build the wall.

“I’m now litigating, along with other states, to defend the separation of powers and protect the money that we’re promised here in Colorado, which otherwise would be diverted to build this wall,” Weiser said.

Weiser also discussed the Affordable Care Act and the importance of healthcare for the disadvantaged. He said thousands of people in Colorado depend on Medicaid and this act, and without it they could otherwise be subject to discrimination.

“Right now, the department of justice is arguing that, because one small part of the Affordable Care Act they think is unconstitutional, … the entire law has to be invalidated,” Weiser said. “That’s a crazy argument that hasn’t applied in other contexts, and it shouldn’t be applied in healthcare. Right now, that issue is also in the Supreme Court.”

As attorney general, Weiser said his primary goal is to fight for and protect the people of Colorado, and he encouraged attending attorneys to do the same.

“I’m also fighting to protect the rule of law and to give a good name for lawyers because the work that we do is about protecting people and defending a constitutional republic that we’ve had for 230 years but aren’t guaranteed to have for more,” Weiser said. “This is an experiment in American governance. It requires leadership.”