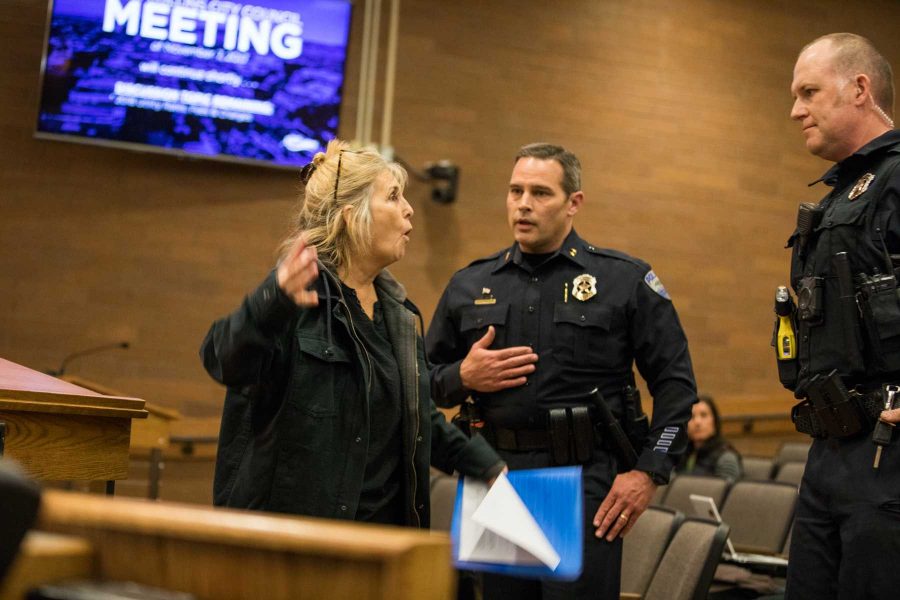 Mourning mother Susan Holmes passionately voices her opinion to the City Counsel about the actions taken after her son was fatally shot by police. (Collegian File Photo)

A Fort Collins woman, who filed a red flag petition against a Colorado State University Police Department officer, has been issued an arrest warrant for lying on the petition.

The Larimer County Sheriff’s Office issued an arrest warrant for Susan Holmes. She is the mother of Jeremy Holmes, who was fatally shot by CSUPD Officer Cpl. Philip Morris July 1, 2017. The warrant was issued Jan. 23, according to a Coloradoan article, and LCSO deputies attempted to serve the warrant at her last-known address the same day.

The shooting came after Morris responded to a call that Jeremy Holmes was armed with a knife and threatening to kill his brother. Morris approached Jeremy Holmes and asked him to put the knife down. Body camera footage of the incident shows Jeremy Holmes running at Morris as he attempted to reach for his taser, leading Morris to shoot Jeremy Holmes.

Since the incident, Susan Holmes filed multiple records requests for the body camera footage and ran for Fort Collins City Council in 2019. A full breakdown of the timeline of her requests can be found in a 2019 Collegian article.

Most recently, Holmes filed a red flag petition against Morris, which if approved would remove Morris’ guns from him. However, these petitions may only be filed by family, household members or law enforcement. In the form, Holmes reportedly indicated that she shared a child with Morris.

In an interview with The Denver Post, Holmes said she does not have a biological child with Morris but was going to argue a legal theory that would allow her to check the box anyway.

Holmes is wanted for first-degree perjury and attempt to influence a public servant. Her bond is set at $5,000. LCSO requests anyone with information on Holmes’ whereabouts to call 970-416–1985 or contact Crime Stoppers at 970-221–6868.