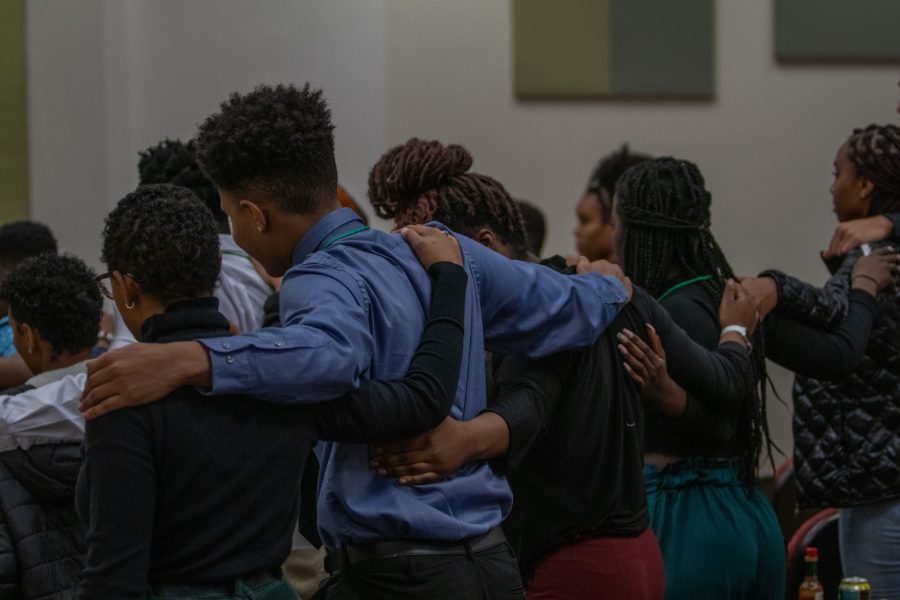 Students at the Black Student Activist Conference stand together with arms around each other while keynote speaker Patrice Palmer reminds students the importance of loving each other and holding the line in times when being an activist gets hard, Feb. 1. (Addie Kuettner | The Collegian)

Sixty years ago, four men sat down and changed the nation. The Greensboro Four performed their famous sit-in in a North Carolina Woolworth’s on Feb. 1, 1960. This event sparked similar protests against segregation and against the refusal to serve Black individuals — and it was all started by a group of college students.

On that day 60 years later, dozens of Black students gathered for the first Black Student Activist Conference at Colorado State University. Students from the University of Northern Colorado of Greeley and the Metropolitan State University of Denver traveled to Fort Collins to find themselves among other student activists looking to make a change.

“Our theme this year is ‘Ti Koro Nko Agyina’ — two heads are better than one,” said Emerald Green, assistant director of the Black/African American Cultural Center, translating a Twi proverb. “It means ‘One head does not go into council.’”

The conference, the first of its kind at CSU, played host to several smaller sessions consisting of discussion over student activism. The theme of the event encouraged activism as something to be thought about and discussed between activists as a community rather than as an individual.

CSU professors, directors, assistant directors and coordinators were present in explaining the importance of activism.

Keynote speaker Patrice Palmer, who works in the College of Business at CSU as an adjunct lecturer, academic adviser and faculty coordinator for the Business Diversity Leadership Alliance, spoke to the importance of the conference being the first ever at CSU. They reflected on a message of connection and what it truly means to be an activist, which, to them, is so much more than simply protesting.

“Protesters are singular-minded,” Palmer said. “Activism is intentional research about dismantling different social structures. It can be as small as just sitting or as big as removing.”

To other speakers, activism can mean different things.

Today, we tell them in their own language who we are. We mean it, we defy it and damn it, we die for it. If you can’t be that strong with me, (there’s) the door.” -Patrice Palmer, keynote speaker and College of Business adjunct lecturer.

“A form of resistance is being present,” said Kyle Oldham, director of Workplace Inclusion and Talent Management for Housing & Dining Services at CSU.

One overarching theme was that movements have power in numbers and, perhaps just as importantly, in passion — the kind of passion that cannot be silenced by the bleak reality of bigotry. Students, who placed emphasis on the newer generations and the struggles they will inevitably face, were the focus of the conference.

“Sometimes that is very discouraging — I’m a little bit older, got some gray hairs, some of it is covered up because of my weave — but I know there’s a lot of things that I did when I was an undergrad that I’m just seeing at my institution back home,” said Bridgette Johnson, director of BAACC. “I’m thinking ‘Goodness, we’re still fighting that fight, and they’re just giving you that?’ and getting discouraged. But I believe that my generation had a little bit more patience than you all have because you want to see it yesterday. We just want to tell you not to give up.”

“Remember that you will not see every seed planted,” Palmer said. “But know that the shade will come.”

Mitchell Holston, coordinator for Student Engagement and Leadership at CSU, gave examples of student activism present on campus, from the Feb. 4, 1970, protests at Moby Arena to demonstrations in Old Town Square and at the Oak Street Plaza in December 2014 to on-campus marches last semester.

Holston also gave examples of how activists can use their First Amendment rights to create ripples of change, which included protesting, speaking out on social media and getting involved in news, governmental and on-campus organizations.

Palmer said change does not happen overnight, and the inequalities present in America will not go away on their own, but they believe such inequalities will go away eventually.

“I may not get there with you, but you will get there,” Palmer said.

Holston said this is essentially why, for many activists, education comes first.

“If you don’t understand the system, … how can you use it to your advantage?” Holston asked when referring to First Amendment rights.

“It was different than anything I’ve ever been to (and) definitely more action-based,” said Sauntice Washington, a construction project management major and member of the Center of Multicultural Engagement and Inclusion at MSU Denver. “It has me thinking a lot.”

The conference was a chance for students to connect with fellow students and activists.

“Now we have networks; now we have connections; now we have influence over spheres that encapsulate the whole thing,” said Christian Cumber, a CSU junior sociology major and defensive back for Rams football.

We may not see the seeds grow, but we at least know we put the seeds there. They’re scared, because they can’t understand the magic we walk with.” -Kyle Oldham, director of Workplace Inclusion and Talent Management for Housing & Dining Services.

Cumber said he is especially thankful for the opportunity to connect and reflect on issues with so many great Black minds in one space.

Though Oldham said the path won’t be easy for student activists, he encourages them to not lose hope. Moreover, Oldham said he believes public fear comes from a lack of knowledge and from the power activists hold.

“Walk in your light, and keep your chin up,” Oldham said. “We may not see the seeds grow, but we at least know we put the seeds there. They’re scared because they can’t understand the magic we walk with.”

Once the conference came to an end, a group activity helped close the event that brought the young activists together.

Palmer gave an impassioned speech to the assembled students, explaining their views on what it means to be an activist and the fellowship of Black communities. They stressed the necessity of commitment to a cause.

“People don’t follow what you do; they follow why you do it,” Palmer said. “If your ‘why’ is not center(ed) in who you are, you will lose so quickly. As you go out and you learn what they say activism needs to be, I need you to always center who you are in that.”

Throughout history, solidarity has been proven as an effective tool for social change, and the request for a united front among Black students was another prominent theme of the conference.

“Today, we take back what it means to be a Black student,” Palmer said. “Today, we tell them in their own language who we are. We mean it, we defy it and damn it, we die for it. If you can’t be that strong with me, (there’s) the door.”

Black History Month is just getting started, and a plethora of events throughout February are being hosted by the BAACC. A full list of the 32 events planned can be found on their website. The theme of Black History Month this year is Ubuntu, a Zulu term translated to “I am because we are.”

Graham Shapley and Gerson Flores Rojas can be reached at news@collegian.com or on Twitter @CSUCollegian.