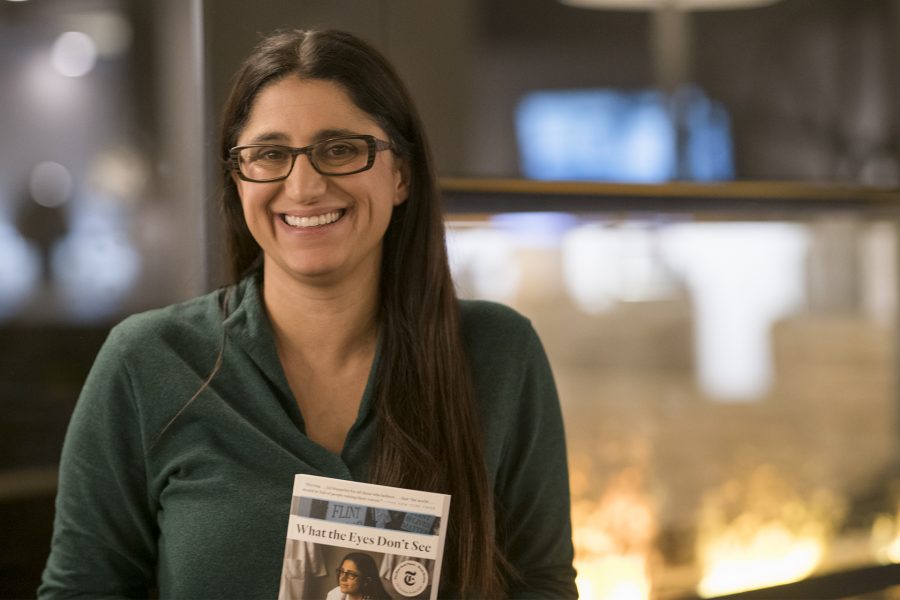 Dr. Mona Hanna-Attisha poses in the lobby of the Hilton in Fort Collins with her book “What the Eyes Don’t See”. (Lucy Morantz | The Collegian)

Images of brown water streaming from home faucets in Flint, Michigan, went viral in 2014-15. Nowadays, the commotion around the Flint water crisis has largely dissipated, but the problem remains roughly five years after it began.

The Flint water crisis began after the city of Flint fell under state control, and an emergency manager was placed to cut funds on city projects. Soon after, residents began noticing foul water coming from their faucets, and investigations ensued.

After denying the problem for so long, the city admitted its wrongdoing after research from people, such as Iraqi American pediatrician Dr. Mona Hanna-Attisha, confirmed lead levels in the water presented a grave danger to the residents of Flint, especially to the elderly and children.

Preceded by an introduction by Colorado State University President Joyce McConnell, Hanna-Attisha spoke at the Hilton Fort Collins Wednesday, reflecting on “What the Eyes Don’t See: A Story of Crisis, Resistance, and Hope in an American City,” the title of the 2018 book she authored about the Flint water crisis.

Hanna-Attisha said writing the book was something she never experienced before, and she faced a series of challenges because of that and because of the crisis itself. She often felt overwhelmed after meeting with mayors, lawyers and parents on a regular basis.

“It felt like the longest pregnancy of my life,” Hanna-Attisha said. “I would go home sometimes with those feelings of anger and overwhelming sadness.”

Hanna-Attisha recalled the many times mothers came to her with questions, asking if the water from the city was safe to give to their children. She always said she placed her trust in the city, and the city failed her and the children she swore to protect.

One of the hardest parts of writing this book is that there is no end — no resolution; nobody’s gone to jail yet.” -Dr. Hanna-Attisha, Iraqi-American pediatrician, author of “What the Eyes Don’t See: A Story of Crisis, Resistance, and Hope in an American City”

“My work should not have happened,” Hanna-Attisha said. “That mom that raised the first jug of brown water should have been listened to. A lot of folks closed their eyes and turned away.”

Many people worked with Hanna-Attisha along the way to figure out solutions, she said. Mothers became scientists just to get to the root of the problem; scientists lost their jobs to protect a vulnerable city; people from all walks of life came together to stand up for the residents of Flint.

“Everybody in this story who had raised concerns about the water was dismissed,” Hanna-Attisha said. “There are lots of villains in this story. A disaster of this scale does not happen by accident. The real villains are harder to see. Without accountability and without some sort of justice, the trauma is still real, and it impedes healing.”

Hanna-Attisha said her book started off being completely about Flint, but she ultimately went on to write about so much more.

“It became impossible to separate my book from who I am,” Hanna-Attisha said.

Along with serving as an account of the Flint water crisis, the book is also a story about a young United Kingdom-born Iraqi immigrant who, with stories about activism, immigration and family, went on to write her own story.

Hanna-Attisha recalled moments when her father showed her war pictures and the atrocities that were committed in the name of war.

“He never shielded me from what bad people could do to vulnerable persons,” Hanna-Attisha said.

With her book, Hanna-Attisha said she wanted to encourage other people to fight for what they believe in, and one way people can do this is by voting. She said Flint is a democracy story — a story about how people lost trust in their government.

“The bigger reason why I wrote this book is to encourage folks to find their passions and know that you have an incredible voice and that you have power,” Hanna-Attisha said.

She taught me that as a scientist, I should stand for my work.” -Aqail Al Abduwani, CSU sophomore

Hanna-Attisha said it took her two years to finish writing the book while dealing with various emotions throughout that time.

“One of the hardest parts of writing this book is that there is no end — no resolution; nobody’s gone to jail yet,” Hanna-Attisha said.

Community members and students alike showed up to Hanna-Attisha’s speech.

A main takeaway for students was what Hanna-Attisha had to say about standing up for what they believe is right.

Hanna-Attisha ended the evening with a story she heard from her grandfather about a man who fed birds every day. She said one day, the man broke his leg. Unable to get up, the birds picked him up and carried him to a hospital to what she said she imagines was a woman doctor.

While she and her brother argue about the meaning of the story, Hanna-Attisha said she believes it is about more than just hard work and working together.

“The story is very much about making the impossible possible,” Hanna-Attisha said.

The fight for Flint is not over yet, Hanna-Attisha said. The recovery process will probably take the next 20 years.

What’s more, the process is not about her, but about the community in Flint.

Gerson Flores Rojas can be reached at news@collegian.com or on Twitter @GersonFloresRo1.