CSU celebrates its 150th birthday with dancing and cake 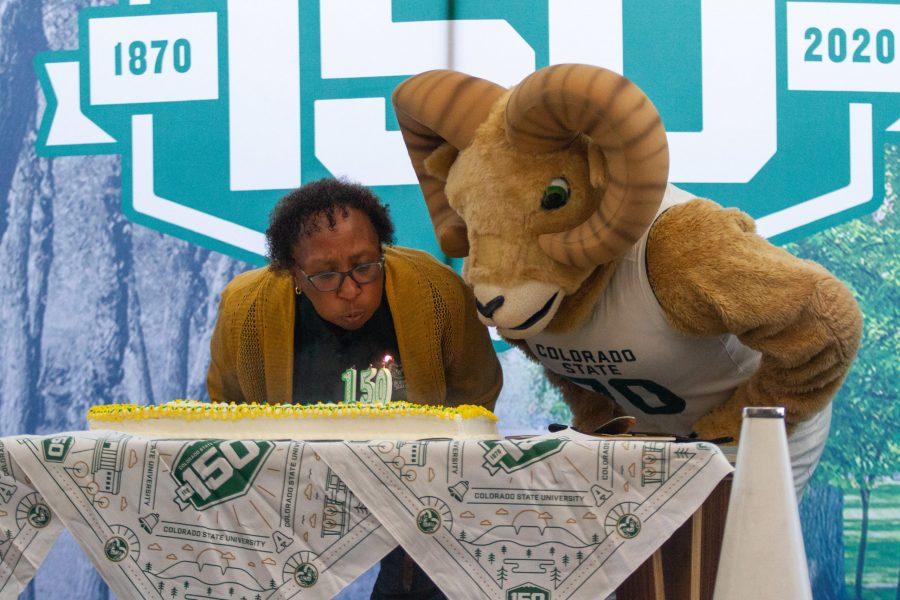 Blanche Hughes, Vice President for Student Affairs, and CAM the Ram blow out the candles on the cake for the Colorado State University 150-year birthday celebration Feb. 2. (Matt Tackett | The Collegian)

Mascot CAM the Ram, the CSU Pep Band, CSU Cheer and more came together Feb. 11 at the Foundry Dining Center to wish the University a happy sesquicentennial. Students had the opportunity to sign a large birthday banner and receive what CSU SOURCE called “once-in-a-lifetime” swag.

“It’s a good day for us all to come together and remember where we’ve come from,” said Dawn Burton, spirit coordinator and cheer coach. “We’re so blessed and lucky to be here on this campus, so for us to all be able to get together and recognize that we’ve been strong for 150 years, it’s amazing.”

This year’s Founders Day Medal has been awarded to Elizabeth “Libbie” Coy, a member of CSU’s first graduating class and the first woman to graduate from the University. The medal is currently on display at the Avenir Museum in the University Center for the Arts.

Founded as Colorado Agricultural College on Feb. 11, 1870, CSU is a land-grant institution as designated by the Morrill Act of 1862.

We’re so blessed and lucky to be here on this campus, so for us to all be able to get together and recognize that we’ve been strong for 150 years, it’s amazing.” -Dawn Burton, spirit coordinator and cheer coach

According to the Library of Congress, the Morrill Act’s title officially reads “An Act Donating Public Lands to the Several States and Territories which may provide Colleges for the Benefit of Agriculture and the Mechanic Arts.”

It provided each state with 30,000 acres of federal land, which the states then sold to fund public agricultural colleges.

However, this land was not officially owned by the federal government and instead belonged to Indigenous peoples, which CSU’s land acknowledgment recognizes. With this in mind, CSU strives to be a leader in research, education and outreach programs.

Cheerleader and freshman Mack McMillan said representing the school and its legacy means a lot to her, and she is excited to continue to do so at future sporting events and ceremonies.

CSU’s commitment to continuous improvement is why junior and chemical and biological engineering major Sydney Villers thinks celebrating 150 years is so important. Villers said she knows many students at smaller colleges whose schools are closing permanently.

“It’s made me especially grateful to have a school that’s successful now, that is doing things, but (that) has also made such great plans and has left such a good impact for the next 100 years,” Villers said. “I’m really grateful for all that CSU has done in its 150 years. I’m really grateful that people have put in place programs for the future of CSU.”