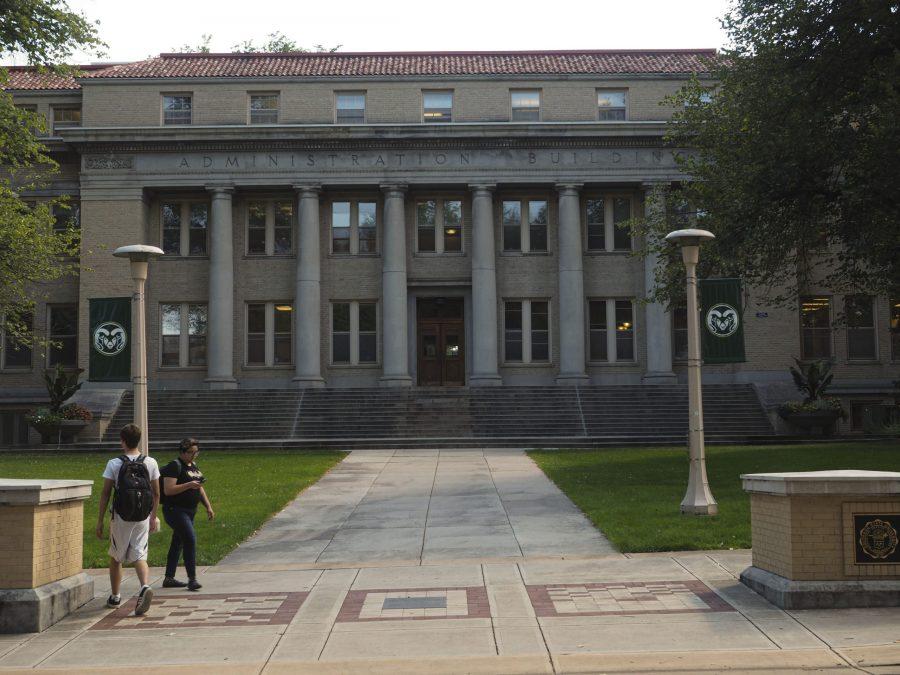 The administration building is home to Joyce McConnell's office as well as many other Colorado State University administrative offices, Sept. 9, 2019. (Gregory James | The Collegian)

CSU received its third Platinum rating from the Sustainability Tracking, Assessment and Rating System this week, one of only five universities out of the 993 registered with STARS to do so.

“We are so very proud to have earned the designation of Platinum — for the third time!” wrote CSU President Joyce McConnell in a Feb. 10 email to the University. “It took everyone at CSU to reach this benchmark and proves that sustainability is a fundamental value we all share.”

STARS is a program of the Association for the Advancement of Sustainability in Higher Education. AASHE launched in December 2005 as the first professional higher education association for campus sustainability across all of North America; the STARS Pilot Project followed in 2008.

It helps us track how we’re doing, allows us to compare ourselves to peer institutions and it helps us set sustainability goals.” -Tonie Miyamoto, HDS director of communications and sustainability

Tonie Miyamoto, the director of communications and sustainability for Housing & Dining Services and STARS liaison, said CSU has participated in the reporting program since it became available.

CSU has submitted five reports since Sept. 12, 2011, receiving a Gold designation twice and Platinum designation three times, the first in 2015.

“It’s a process that takes at least six months, and it’s a really comprehensive assessment of sustainability across all aspects of the University,” Miyamoto said.

The report looks at a few main categories: planning and administration, academics, engagement, operations and innovation and leadership. The University received a full 58 points in the academics category this year and was 0.94 points shy of a perfect score in the engagement category.

Miyamoto said members of the President’s Sustainability Commission input thousands of data points for each report, and an algorithm generates point totals.

While the STARS program is self-reported, AASHE reviews all Platinum institution reports, and CSU uses a third party consultant, GreenerU, as well.

GreenerU Vice President of Change Management Dallase Scott said GreenerU’s purpose is to provide universities with another set of eyes that is familiar with the reporting structure and reduce the “post-submission headache” that can come from reporting errors.

“We’re trying to push the University to think about each of their credits to make sure that they’re submitting the highest quality report that they can,” Scott said. “We’re always using that third-eye view of trying to ensure that everything that is being reported is putting it into the standards that AASHE expects.”

It’s not one thing; it’s everything. There is no point that we get an absolute zero on.” -Energy Engineer Carol Dollard

Carol Dollard, an energy engineer on campus, said because the reporting platform allows for anyone to challenge the data, CSU strives to provide information that is as accurate as possible.

“Imagine you took a test in a class, and the professor graded it, and you got the grade,” Dollard said. “But then the professor put your test online for everybody to see, and everybody is allowed to challenge his grading. Anyone can challenge our data. There’s a lot of checks in the system to make sure that people are reporting valid data.”

The University participates in STARS to review its sustainability levels and create goals for the future. For example, both Miyamoto and Dollard explained that the University implemented campus-wide sustainable learning outcomes, which boosted its academics and engagement scores, after the report in 2017.

“It’s not subjective; … it’s a really valuable self-tracking tool for us,” Miyamoto said. “It helps us track how we’re doing, allows us to compare ourselves to peer institutions and it helps us set sustainability goals.”

Scott said the success of CSU compared to other universities has to do with CSU’s broad sustainable reach all across campus, which Dollard echoed.

“The short answer is — it’s not one thing; it’s everything,” Dollard said. “There is no point that we get an absolute zero on.”