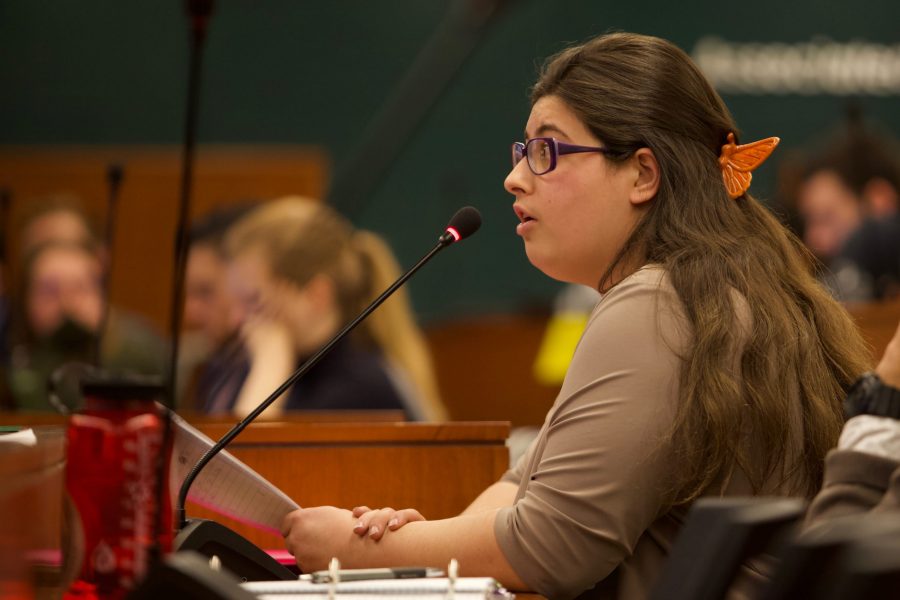 Senator Savanah Overturf defends her bill on Feb 5. The bill aimed to fund and host a Disability Simulation event and saw a variety of discussion from people outside of the Associated Students of Colorado State University, from community members, alumni, and current CSU students. (Ryan Schmidt | The Collegian)

A proposed bill last week regarding a disability simulation event was questioned and opposed by members of the disabled community during the previous meeting. At the bill’s second and final appearance, it failed to pass with a 0-27-1 vote.

Discussing and voting on the bill by the Associated Students of Colorado State University senate followed an approximately hour-long gallery input session from students, alumni and others identifying as disabled.

While a few spoke in support of the bill, a majority of the gallery opposed the bill and urged senators to vote against it.

Many said they felt a simulation couldn’t properly provide an experience in which able-bodied participants would emerge with either understanding or empathy for disabled people.

“It doesn’t in any way foster empathy, inclusion and a discussion towards changing things to foster equality,” Luna Nordstrom said. “Please don’t fund this bill.”

Others expressed a feeling of hurt or insult at the thought of others attempting to replicate their identity.

“This is the disabled version of blackface,” said Chian Baumer, who works with the Student Disability Center. “This is downright cultural appropriation. If this event were to happen, the individuals participating can take the disability off at the end of the day. We cannot.”

Baumer said the stigma, shame, pain, inequality, discrimination, pity and hate that come with having a disability cannot be simulated.

Larimer County Commissioner John Kefalas attended and asked senators to vote yes on the bill. He said he’s had experience with simulations hosted by the United Way of Larimer County.

Kefalas said these simulations focused on poverty and were effective for people not in that socio-economic situation.

“Given that Senator (Savanah) Overturf is a person with a disability on the autism spectrum, is a person who has a lived experience, I think that working with all the various stakeholders, this can prove to be a very effective event,” Kefalas said.

This is the disabled version of blackface. This is downright cultural appropriation.” -Chian Baumer, student disability center

As the bill asked for $1,000 for funding, others noted that the money could be better used in making areas of campus more accessible and inclusive. For example, Luna Nordstrom suggested adding handicap buttons on the doors in Braiden, as the doors do not currently have an option for this.

During the senate discussion of the bill, Senator Savanah Overturf, author of the bill, read numerous letters from supporters. These included statements and endorsements from CSU students and alumni.

“This is not just a simulation; this is something I created as a person with a disability,” Overturf said in defense of the bill.

Overturf exited the senate shortly after, following an event in which an opposer of the bill, CSU alumni and senator-emeritus Cerridwyn Nordstrom, began reading a post from Overturf’s Facebook page, claiming it had been posted while the gallery was speaking.

The post in question was posted at 7:36 p.m., which would have been near the end of gallery input.

Cerridwyn Nordstrom and Baumer asked why Overturf would think it acceptable to spend time on Facebook rather than listen to the testimonies and beliefs of those speaking in the gallery.

Speaker of the senate Blake Alfred prevented Cerridwyn Nordstrom from fully reading the post, calling it a personal attack and inappropriate.

Other senators thanked those in the gallery for attending and teaching the senate about their lives as disabled people.

“There is power behind your words, and having an event that shares those words is what we need,” Senator Marlis Hazleton said. “We don’t need simulations.”

It was also mentioned numerous times that, while the intention of the bill was admirable, the impact could be more harmful than intended. With this in mind, the bill failed to pass.