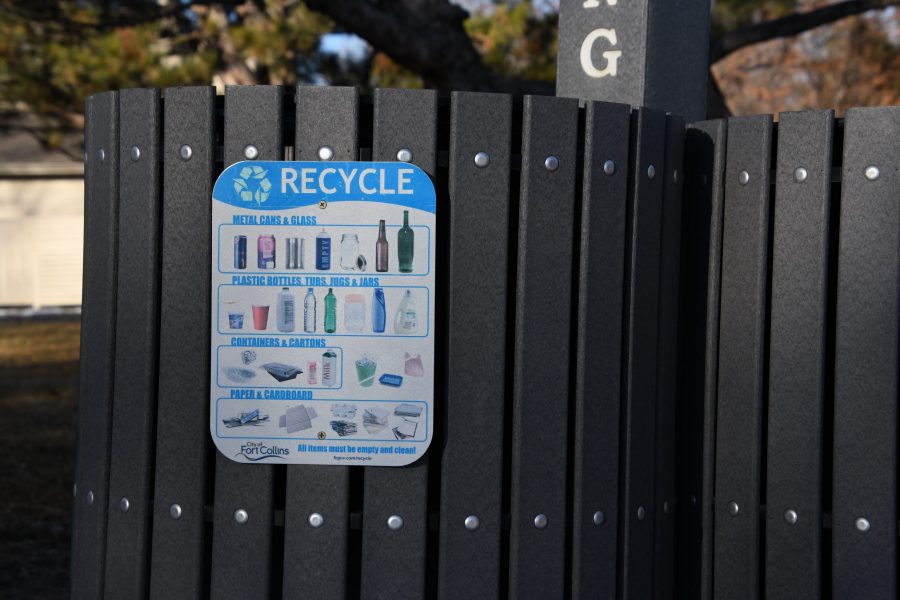 A sign on a recycling bin in the Warren Lake neighborhood depicts what items can be recycled. Warren Lake s part of the sustainable neighborhoods network in Fort Collins. One of the projects they've earned credit for is a workshop on how to properly recycle. (Anna Montesanti | Collegian)

The history of environmental sustainability in Fort Collins extends back many years, and with the recent implementation of the Climate Action Plan and declaration of a climate emergency, Fort Collins constantly looks to become more sustainable.

Another program the City has implemented to work toward environmental sustainability is the Sustainable Neighborhoods Program. The program involves community members by giving them an opportunity to make a change.

“We share the planet with so many other people and animals and living things, and we’re doing things that are really harmful,” said JC Ward, senior city planner for Neighborhood Services for the City of Fort Collins. “We have opportunities to make different changes.”

Fort Collins is the third city in Colorado to implement a sustainable neighborhood program. However, the City created a different model from its predecessors: Denver and Lakewood.

“They have a project manager and coordinator in the city of Denver and of Lakewood who go out to all of the projects with the neighborhoods; they do a lot of heavy recruitment,” Ward said. “Our model is not really like that. (The model is) a less direct delivery of programs by City staff and more of a collaboration per support network.”

If we can do it in a small way here, that can grow in a grassroots way to make big changes. I mean, countywide, statewide, nationwide, we can all make a difference in our own area and in our own way.” -Byron Laws, Warren Lake sustainable neighbor community organizer

“The concept behind it is basically to make positive change at the neighborhood level from within the neighborhood,” said Byron Laws, Warren Lake sustainable neighbor community organizer.

There are five areas that neighborhoods can focus their projects on: air, water, land, energy and people. To become a certified sustainable neighborhood, neighborhoods must complete projects in two of the given areas, according to Ward.

Each project counts for a certain amount of credits. To maintain the neighborhood’s certification, neighborhoods must earn a minimum of 60 credits, according to the program overview. Neighborhoods can become outstanding if they earn 100 credits within a year.

If a neighborhood is outstanding, they will receive both recognition from elected officials and custom neighborhood signage.

The program is generating stronger community ties and helping Fort Collins achieve its target goals within the Climate Action Plan, Ward said. By introducing a residential piece, small actions can happen in every home across the City, creating a large collective impact.

“If we can do it in a small way here, that can grow in a grassroots way to make big changes,” Laws said. “I mean, countywide, statewide, nationwide, we can all make a difference in our own area and in our own way.”

If the 10 people on your block do it, the 100,000 people in Fort Collins do it, then those are the kinds of things that really add up to those big environmental changes and big cultural changes.” -JC Ward, Fort Collins senior city planner for Neighborhood Services

The ultimate goal of the Climate Action Plan is to become carbon neutral by 2050. Being carbon neutral is having a net zero carbon footprint, meaning the amount of greenhouse gas emitted into the atmosphere does not exceed the amount taken out.

The Sustainable Neighborhoods Program works to introduce projects that help with this goal through enhancing the livability of the neighborhoods and reducing residents’ ecological footprints, according to the program overview.

“If you take a chance to start improving what lies directly underneath your feet, you can make a dramatic change right where you live,” Laws said. “What’s more important to you individually than where you live? If we all did that in the places where we lived, guess what? The whole thing would change.”

Every small action helps. It reverberates out, much like the ripples created when a rock is thrown into a pond, Ward said.

“Maybe you see the result; maybe you don’t,” Ward said. “But if the 10 people on your block do it, the 100,000 people in Fort Collins do it, then those are the kinds of things that really add up to those big environmental changes and big cultural changes.”