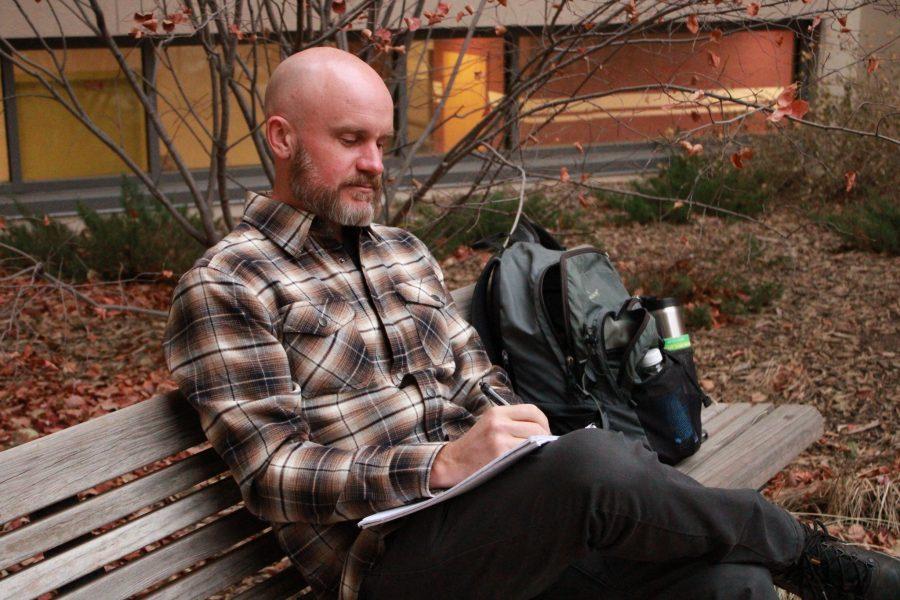 U.S. Army Veteran and Second-Year Masters of Fine Arts student Ryan Lanham writes while sitting on a bench Nov. 20. Lanham is in the Department of English at Colorado State University and is facilitator of the University Writing Center’s Veterans Writing Workshop. Lanham got his undergraduate in History with a minor in creative writing and says something that comes to his mind often is "Think of yourself, question authority." (Asia Kalcevic | The Collegian)

A new writing workshop that opened this autumn has provided a space where veterans can share their experiences and heal.

Facilitated by Ryan Lanham, a Master of Fine Arts student at Colorado State University, the Veterans Writing Workshop had a “soft roll-out” this past spring, but veterans began writing in earnest this semester, Lanham said.

“We were still hammering out specifics: location, advertising, journal name, online platform,” Lanham wrote in an email to The Collegian.

The vision for the workshop came from several places, including from his experience in the U.S. Army, Lanham said.

“(From) 17-27, I was an alcoholic and drug addict, so somehow I thought the military would be an escape from that type of life,” Lanham said. “My dad kept saying I needed discipline. He was Air Force, (and) his dad was Air Force.”

Lanham was deployed in Afghanistan for a year and found his call to action to help other student-veterans the year after he came home, he said.

“That first year out of the army was the darkest year of my life,” Lanham said. “When I was drinking, I couldn’t deal with all of the trauma. So, a year after I got out, I tried to take my life. That suicide attempt was the worst and best part of my life.”

Lanham said he did not expect to wake up from his suicide attempt the next day. But when he did, he asked himself if he would attempt suicide again or if he would try something different.

About a year after he left the Army, Lanham said he reached out for counseling and began to improve his mental health before pursuing an undergraduate degree in history at the University of Colorado Boulder.

We’ve attracted a really great group of writers, and I have witnessed firsthand the evolution in craft of several of our participants, … watching their work — their creativity — evolve.” -Ryan Lanham, facilitator, Veterans Writing Workshop, CSU

“I got a history degree because I wanted to know ‘Why were we there?'” Lanham said. “Why was I fighting? Why was there all this violence?”

Originally from Fort Worth, Texas, Lanham came to Colorado for rehab eight years ago and was in therapy when he realized the catharsis of writing his story was so important to the process of healing from post-war trauma. Lanham said this was a huge catalyst for the formation of the workshop.

Lanham said he attended a two-week-long ayahuasca retreat in January to continue this healing process. Receiving a recommendation from a fellow CSU student-veteran, Lanham traveled to the Amazon rainforest in Peru to attend the retreat.

“During my last ceremony, one in which I experienced profound healing from war, I had a revelation — a cosmic insight — to start a veterans writing group,” Lanham wrote. “A place to share our experiences and continue to heal from the wounds of war.”

When he returned from the trip, he received a message from Lisa Langstraat, an associate professor in the English department, about facilitating the workshop.

The English department and Writing Center were already organizing a veterans writing group when Langstraat reached out to Lanham about facilitating.

A community-first group that creates a safe space for veterans to “go there” in their writing, the workshop was originally meant to be an instructional space, but Lanham wrote he suggested switching it to a generative space.

Lanham said the experience has been immensely rewarding, and the workshop has served as a place for older veterans to share their stories for the first time, especially those who served during the Vietnam War, Lanham said.

“From the moment they got off the plane, people were telling them they’re … shunned, basically,” Lanham said. “So this is the first time they’re being heard, and it’s hugely healing.”

Lanham said he intends to publish submissions from the workshop in a journal titled “Charlie Mike,” a term that, to service members, means, “continue mission.” The journal will be published in the spring and currently has about 15 submissions. He said the workshop is aiming for 200-250 pages of submissions.

“My primary goal is to get other veterans’ works published, but I do have a few pieces I may submit,” Lanham said. “We’ve attracted a really great group of writers, and I have witnessed firsthand the evolution in craft of several of our participants, … watching their work — their creativity — evolve.”