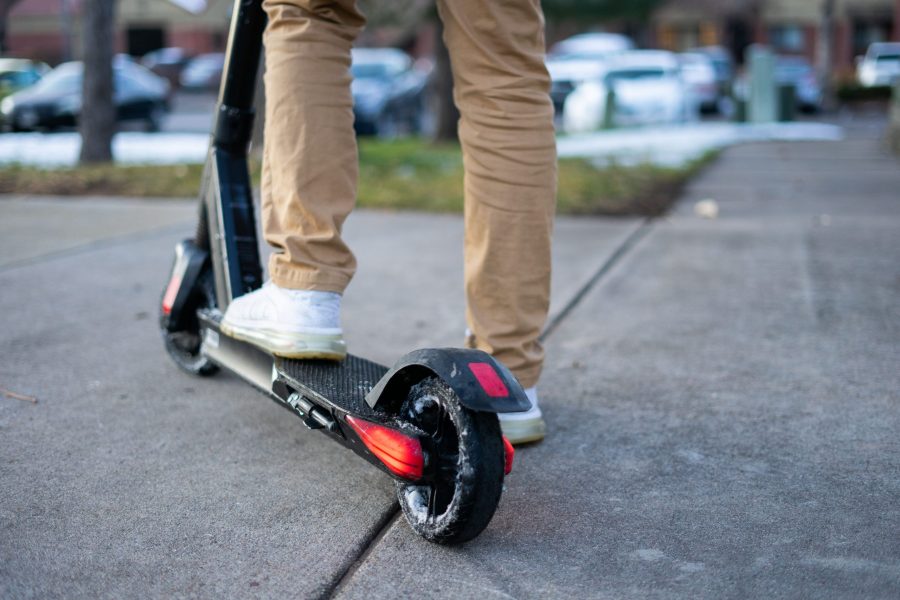 A person rides a bird scooter in Fort Collins on Thursday Nov. 21. Bird Scooters came to Fort Collins in the fall of 2019, providing a different mode of transportation for commuters that is more accesible and environment-friendly. (Skyler Pradhan | Collegian)

Bird e-scooter chargers are hired by the company to collect the scooters at night, bring them back to their residence, charge them and redistribute the scooters the next day. Valerie Casto, a Fort Collins resident, has picked up the job to earn some extra money.

Casto said she heard about the Bird-charging job from her old city that had them, and when she heard they were coming to Fort Collins, she decided to give it a try.

“I thought it would be really easy money,” Casto said.

Debbie Bass, an employee with Bird, wrote in an email to The Collegian that chargers are hired in every community where Bird operates.

“These individuals collect Birds for charging and inspection and are compensated per vehicle collected, providing a great source of supplemental income,” Bass wrote.

Casto said the job allows her to work on her own hours, and whenever she’s free, she pulls up the Bird app and switches it to charge mode. The app will then tell her where the Birds that need to be charged are located.

Casto said that a lot of the Birds are around CSU’s campus, and once turned on, the app will navigate the charger directly to the scooter.

“Once I get there, I use the app again, and I scan the Bird,” Casto said. “Once it registers, the Bird will chirp, and it’ll be able to be moved at that point. I’m able to at least ride them unpowered to my vehicle.”

Casto said she’ll load as many Birds as she can into her vehicle, drive home and charge them there. She said that most Birds have a release time at about 7 a.m., so she’ll wake up at 6 a.m. to distribute them.

“Back on the app, there’s something called ‘Bird Nests,’” Casto said. “You can reserve it, and, depending on the nest size, you’re usually only allowed to release three Birds. You can reserve them for about 30 minutes, so that gives me time to get up, load all the Birds back up in my vehicle and release them.”

Casto said she then has to take a picture of the released Bird and send it to the company. She said if the Birds are released by 7 a.m., she will usually get paid that day.

“It’s kind of nice,” Casto said. “If you know that you’re going to a movie with friends that day and you need a little extra cash, you can just make sure you pick up Birds the night before, and you can get the money that day.”

Casto said she doesn’t make much money from charging Birds. She said she has nine chargers at her house, so she can make up to $45 per day. However, she said she isn’t always able to grab nine Birds, so she usually makes $15-$20 per day.

“It’s really hard to get nine; it’s kind of competitive,” Casto said. “I’ve had people push. My husband sometimes comes with me, and another Bird charger literally pushed him out of the way to pick up the Bird.”

Casto said a lot of the time the Bird will only be on the map for about 30 minutes before it gets picked up, so chargers have to be speedy.

“It’s kind of interesting,” Casto said. “You’ll be driving to a Bird scooter, and you’ll see another charger already there, and you’ll be like ‘Oh man, I wish I could’ve gotten to that one sooner.’”

Casto said that’s why she goes later in the evening, after 9 p.m., to avoid the rush hour and pick up some later Birds. She said the app doesn’t display all the available Birds at once, so a charger will have to wait until they become visible on the map.

“I think that’s what makes it competitive,” Casto said. “There’s only a certain number of Birds available at a certain time; it’s not all of them. The most frustrating thing is when you go to pick up a Bird and only one is available, and you see three or four right next to each other, but you can only pick up the one.”

Casto said the hardest part of the job, for her, is waking up at 6 a.m. She also said the job isn’t something she can do long term, but she enjoys the extra cash.

“It is fun to go on a hunt and search for a Bird,” Casto said. “It feels kind of like a version of Pokémon GO, but it’s a Bird, and you can make money off of it. There is an adventure aspect of it.”