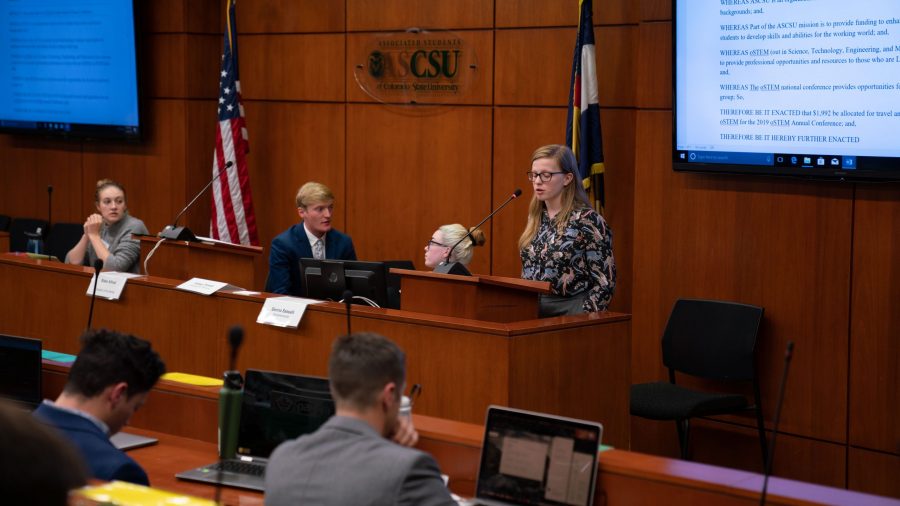 Marlis Hazelton introduces a bill to correct a technical issue that prevented OSTEM from attending an annual conference in Detroit. (Nathan Tran | Collegian)

The Associated Students of Colorado State University discussed two new bills and voted on a new chair for the External Affairs Committee.

Bill 4913, authored by Internal Affairs Vice Chair Marlis Hazleton, aims to fund $1,000 to Out in Science, Technology, Engineering and Mathematics for an upcoming conference in Detroit, Michigan.

I’m here to represent my constituents and to represent a minority because we already failed them once.” -Internal Affairs Vice Chair Marlis Hazleton

OSTEM focuses on the LGBTQ+ community within STEM programs.

Hazleton said the bill is necessary because someone in ASCSU made a mistake.

“Some of our executive branch has chosen to take an easier route, and that’s why we’re here today,” Hazleton said.

The funding is necessary because oSTEM was not made aware of a deadline for a travel grant application by ASCSU and were unable to submit their application on time, Hazleton said.

OSTEM initially reached out to the Board of Student Organization Funding on Sept. 16, Hazleton said. In the emailed reply to oSTEM, there was no mention of a deadline.

In response to the mistake, Hazleton said a committee member of BSOF said this isn’t the first time they’ve made a mistake, but, due to bylaws, their hands are tied.

Senator Josh Johnson suggested for the senate to either amend this bill or write a new one that would take the funds from BSOF. Hazleton and others said this would be a possibility to look into.

The bill was moved to both the Internal and University Affairs committees.

“I wrote this bill to meet the demand that we have seen for our travel award,” Saxton said. “It’s important to understand that graduate students are a cornerstone for this university.”

“Graduate students support this university in a lot of ways, and they TA your classes,” Saxton said. “They deserve the support of the University and us as students.”

Saxton’s bill would help fund grants that would allow graduate students to travel to and present at conferences.

Saxton said these are invaluable experiences because they allow students the chance to interact with experts and leaders in their fields.

Chair Alejandro Benitez said this is a bill that essentially pays for itself.

The bill was sent to the University Issues Committee.

Former External Affairs Committee Chair Lauren Flores stepped down from her position, saying that, in light of recent campus events, the senate body has failed.

“Combing through bylaw after bylaw of our documents looking for semantical reasons to remove legislation from the floor just because someone finds it disagreeing of the social or political status quo is disingenuous of an ethical practice,” Flores said.

Flores said ensuring that ASCSU becomes a place where people can have productive dialogue without silencing the voices of others is essential to integrity and credibility.

She said that noise cannot be confused with truth simply because it can shout louder than truth. Flores also asked for senators to be unafraid to speak against what is false.

“Remember who you serve and, most importantly, that you are servants,” Flores said.

Following Flores’ stepping down, the Senate held an election for the position.

“I want to take my leadership knowledge and ability to help push the External Affairs Board into new heights,” Overturf said.

Overturf said the senate is lacking the knowledge that they have neighbors in the form of other student governments that she would like to connect with.

The connection to other communities is something some senators appreciated about Overturf’s ambitions.

“What I really liked about Overturf is that she even extends (her relationships) to other communities around us as well, not just Fort Collins,” Associate Senator Daizha Brown said.