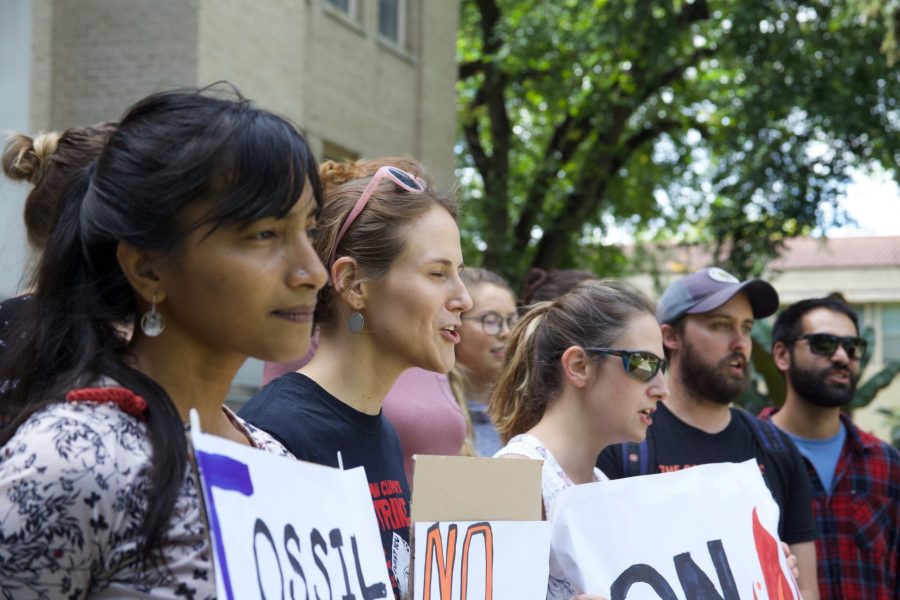 Protestors for a climate strike march on campus Sept. 20. The protesters rallied with chants such as, “What do we want? Climate action!” and, “Unite behind the science.” (Ryan Schmidt | The Collegian)

Inspired by activists such as Greta Thunberg and her movement #FridaysForFuture, the global environmental movement has motivated millions of young people to speak out about climate change around the world, including a movement of young people in Fort Collins that helps organize climate strikes at Civic Center Park every Friday at 6 p.m.

One such group that has stemmed from this “green revolution” is Sunrise, an organization that encourages young people to get involved in activism through creating hubs in their communities.

“(The) Sunrise Movement is a youth-led movement with its main goal being building an army of young people all across the United States to fight the climate crisis for our future and for the future of other generations,” said Abby Miller, a Rocky Mountain High School sophomore and Sunrise hub coordinator. “We want this to be a starting place for climate action in Fort Collins.”

“What I really hope to see is everyone unite together,” Holden said.

Drawing inspiration from events covered internationally on news outlets, such as the Amazon Rainforest fires and the melting of ice caps, Seeber said negative environmental impacts can be seen right at home.

“You get to see these natural environments (in Colorado) and outside,” Seeber said. “It’s so gorgeous where we live. We’re so fortunate to have that. But then, if you go a little bit south down the highway, you get to see the degradation of these areas, and it’s really sad.”

We want everyone to be able to be an activist and to be able to speak out and feel comfortable with it.” -Sierra Farnsworth, Rocky Mountain High School sophomore, Sunrise hub coordinator

Nottingham previously called on John Kefalas, Larimer County commissioner for District 1, and demanded a ban on fracking, and he listed other climate demands, including a Green New Deal, respect for Indigenous land and sovereignty, environmental justice for all, protection and restoration of biodiversity and implementation of sustainable agricultural practices.

“We demand that the U.S., the state of Colorado and that Larimer County transform our economy to 100% renewable energy by 2030,” Nottingham said.

On a slightly smaller scale, CSU’s sustainability practices were called into question.

Speakers urged the University to divest from all fossil fuel companies, arguing against the morality of accepting “dirty oil money.”

“We, the Northern Colorado Climate Strike, demand that CSU end all financial ties, corporate sponsorships, endorsements and partnerships with any and all fossil fuel companies complicit in the production, refinement, distribution or leasing with fossil fuels, including, but not limited to, natural gas, crude oil, gasoline and coal,” Nottingham said.

Some organizations who have shown support at the climate strikes include Extinction Rebellion, 350 Northern Colorado, Fridays for Future, Earth Guardians, League of Women Voters, UnEARTH and Save the Boundary Waters.