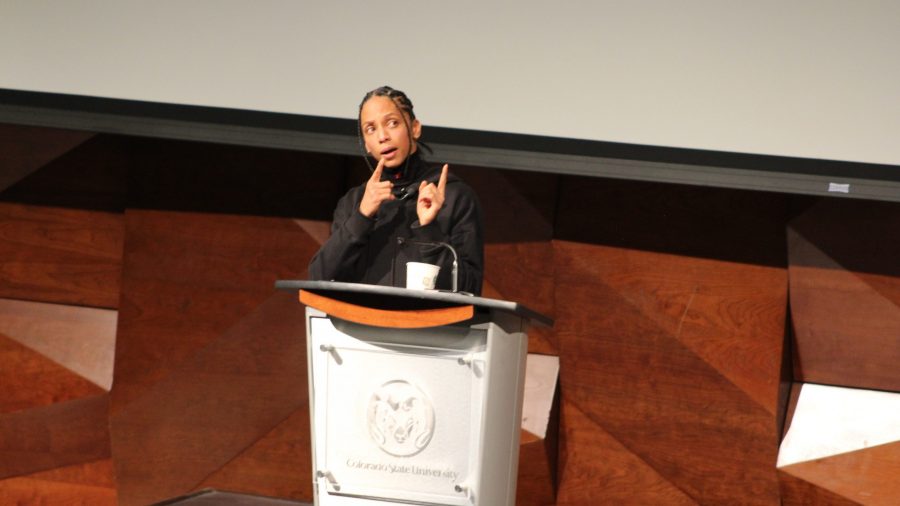 Janaya Khan, a queer, Black and gender-nonconforming activist who co-founded the Black Lives Matter Canada chapter and serves as campaign director for the nonprofit Color of Change, had the Lory Student Center Theatre bursting into laughter and snaps during their speech on Oct. 30.

“It’s cool to see a lot more intersectionality within the events themselves because intersectionality is not only beautiful, but necessary,” said Angelise Guerrero, CSU senior health and exercise science major and PRC staff member. “It’s a lot of what CSU as a community experiences. To have these very intentional programs is amazing.”

Khan spent the first portion of their talk unpacking civil rights history and recent social movements to dig at their core theme of disrupting systemic inequalities.

Khan said activists love to “unpack” and deconstruct articles and current events so much that it becomes a habit.

Discussing the March for Our Lives movement that was started by white high school students after the Stoneman Douglas High School mass shooting in Parkland, Florida, Khan said there are major discrepancies with what protests society and social media decide to support.

When I think of Trayvon Martin and Tamir Rice and Mike Brown, I’m reminded of who’s never, ever allowed to be a boy, to be a child.” -Janaya Khan, Black Lives Matter activist

“I believe that when young people rise up, they should be surrounded and protected,” Khan said. “That we should be elevating and amplifying their voices. But that’s not what happened when Black kids rose up in this country.”

In 2017, the Federal Bureau of Investigation cited “Black identity extremists” as people likely to target law enforcement. Khan used this as one example to support their claim of the country silencing young Black voices.

Khan said the term “Black identity extremists” is not clearly defined and not how most people in the Black Lives Matter movement describe themselves.

“I think about this because we got told that boys will be boys, but when I think of Trayvon Martin and Tamir Rice and Mike Brown, I’m reminded of who’s never, ever allowed to be a boy, to be a child,” Khan said.

Khan cited the current political administration as one cause for ongoing racial inequality but made it clear that political figures are not the only ones to blame.

Khan said when communities isolate themselves from anyone different than them, they are more likely to feel hostility toward others.

Khan urged the students in the audience to make as many connections with others as possible.

“Every time I hear really inspiring people talk about really important things, they always have these great things that are going to sway every little decision in your life,” said CSU graduate agricultural and resource economics student Regan Gilmore. “You’re going to put yourself in these uncomfortable positions because you’ve been told that it’s okay to.”

Khan said they believe the best way to combat the current political climate is for the political left to find more common ground or a “bottom line.” Instead of arguing about smaller details or past mistakes, people need to unite over their shared values and beliefs.

“I’ll tell you something about activism: It doesn’t build character, it reveals it,” Khan said. “I used to fight for people who look like me because of my experience. (That) is no longer why I do the work that I do; it’s not enough. Identity should be our entry point, not our exit.”