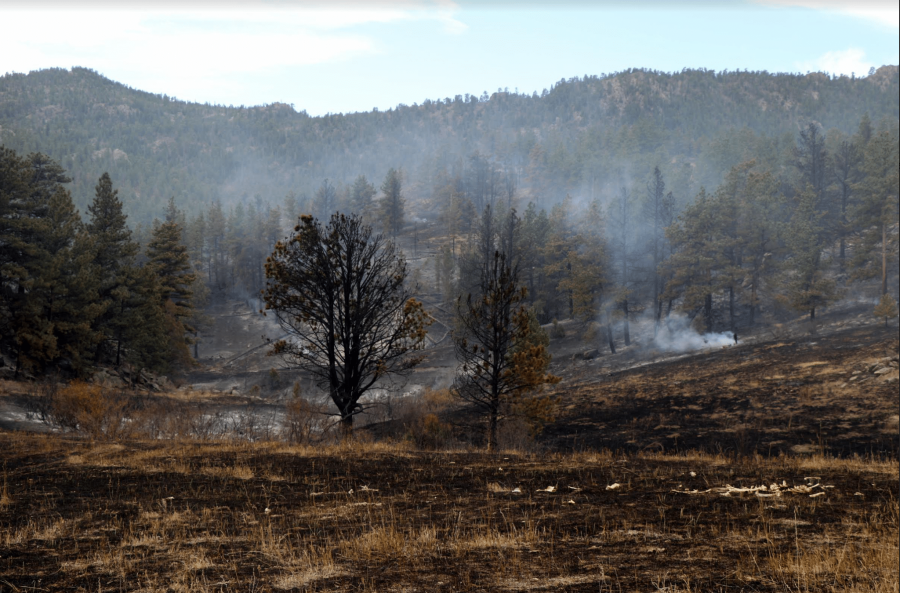 Oct. 17, 2019 - The Elk Fire in Larimer County has been suppressed by cold weather and wind, but crews are still working to fully contain the fire as of Friday. (Photo courtesy of the Larimer County Sheriffs Office)

The Elk Fire, burning just northwest of campus, is up to 80% containment, according to an update from the Larimer County Sheriff’s Office at approximately 6:30 p.m. Thursday.

The fire was thought to be 175 acres Wednesday night, but an update from the Larimer County Sheriff’s Office puts the size of the fire at 622 acres.

The fire is a result of a prescribed burn project near Ben Delatour Scout Ranch that escaped its boundaries.

There was little change in the fire overnight Wednesday and no growth on Thursday.

As of Thursday morning, there were over 100 firefighters from over 12 firefighting agencies working to contain the wildfire.

Earlier Thursday, air operations resumed with a heavy tanker, a single-engine air tanker and a lead aircraft guiding and making drops on the fire, as well as a type three helicopter.

As of 6 p.m. Thursday, the mandatory and voluntary evacuation notices were lifted from Glacier View Gates 1-12.

Gate 13 remained under mandatory evacuation overnight and was set to be lifted at 8 a.m. today.

There are an estimated 50 homes that have been threatened by the fire, and one shed has been damaged. No additional injuries or damage have been reported, and all major roads are still open.

There will be a community meeting at 5:30 p.m. at the Livermore Community Church for those affected by the fire, according to the LCSO press release.

As of noon Friday, the cooler weather was helping to suppress the fire, and all lines were holding well despite strong winds, which were actually helping to consume internal fuels, according to an LCSO press release.

Crews are still working to fully contain the fire.