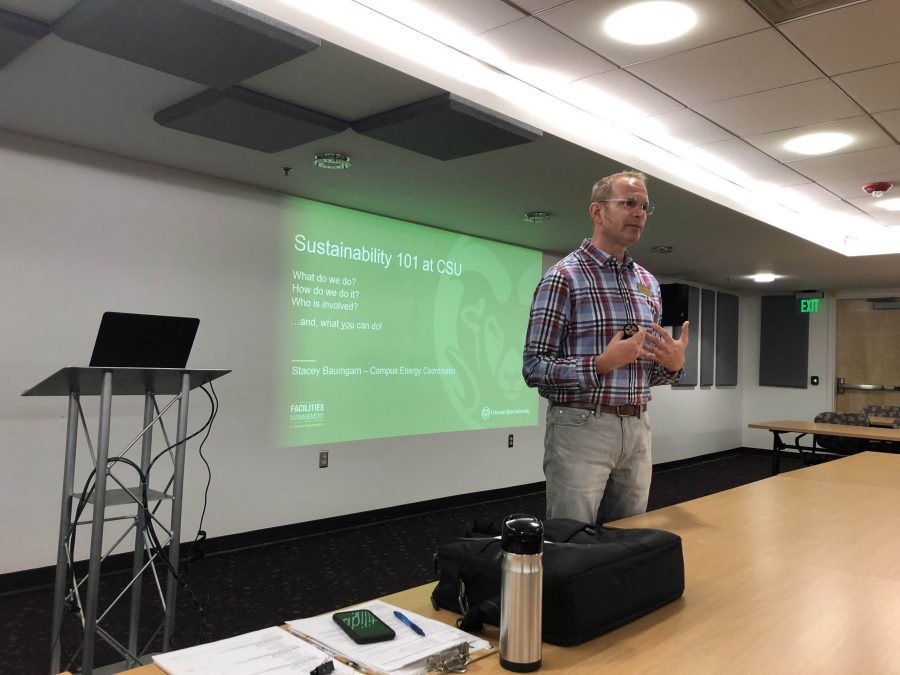 Sustainability and the future of Colorado State University’s environmental footprint made an appearance this week.

CSU hosted a “Sustainability 101” event on Oct. 2, focusing on the ways the school strives to be sustainable, as well as the ways that students, staff and faculty can help.

The lecture was presented by CSU Campus Energy Coordinator Stacey Baumgarn, who began by explaining how CSU has led the charge in many regards when it comes to environmental and climate commitments.

For instance, CSU signed the American College & University Presidents’ Climate Commitment in 2008, resulting in the first Climate Action Plan for CSU in 2010, as well as the Climate Reality Pledge in 2017.

The Climate Action Plan is a living document and plan that aims to achieve climate neutrality, according to CSU’s Facility Management website.

The Climate Reality Pledge commits CSU to utilizing 100% by renewable electricity by 2030.

The presentation then went over how CSU was doing when it came to achieving those goals, with Baumgarn drawing special attention to the CSU Sustainability, Tracking, Assessment and Rating System score provided by the Association for the Advancement of Sustainability in Higher Education.

“In 2015, CSU became the first university in the world to earn a Platinum rating in STARS,” reads CSU’s Facility Management website. “STARS is considered the most comprehensive and well-respected sustainability assessment for colleges and universities, with 700 institutions taking part on six continents.”

The STARS report covers a variety of aspects related to CSU and sustainability, including academics, operations, engagement and innovation and leadership, explains AASHE’s website.

“For two years, we were the only institution in the United States, in the world if you will, to have a Platinum rating,” Baumgarn said. “The second institution to receive a platinum rating was Stanford, and we love when any press release comes out that says ‘Stanford joins Colorado State University.”

Baumgarn explained that the “academics” section of the STARS rating is very high, scoring almost 100% of the points available in academic and research categories.

“That’s because there’s a sustainability-related major in every college,” Baumgarn said. “There’s over 3,000 courses or something offered at the University, with over 800 courses are related to sustainability. Some are very obvious and have ‘sustainability’ in the title, but there are others that you might not think of but are absolutely supporting this idea of sustainability thinking.”

He added that, although the latest score for CSU’s STARS rating came from 2017, the University was working on another assessment to get a more recent score.

Baumgarn went on to explain that certain lines of thinking need to be altered when it comes to sustainability.

The presentation then shifted to three key numbers that Baumgarn pulled from the 2018 fiscal year. He explained that in 2018, CSU consumed 178.1 million kilowatt-hours, burned 123.6 million pounds of coal and spent $13.2 million on electricity.

However, Baumgarn also drew attention to the solar panels mounted on top of the Recreation Center and explained how that electricity is sold to the City of Fort Collins.

The Rec Center houses the largest solar installation on the entire campus, according to CSU’s Student Recreation Center website.

Baumgarn concluded the presentation by discussing a few ways a student could be more environmentally friendly, touching first on an important recycling guideline.

Baumgarn added that, when it comes to doing one’s part, it really is about the little things.

“Everybody matters, and everybody has a role to play,” Baumgarn said. “There are those simple things that each of us can do, like how we come and go to campus. We can walk, ride our bike, skateboard or carpool. Those things matter.”

He went on to explain that regardless of who a person is, they can incorporate daily practices in their life that are sustainable and environmentally friendly.

“When you finish using a computer in a library, turn the monitor off,” Baumgarn said. “One monitor sitting there is burning 35 watts. If you turn it off, even for an hour, it’s wonderful. I think if you care, and you want to do something, then think about the little decisions you’re making every day.”

Editor’s note: Portions of this story have been updated to reflect correct figures and series of events.