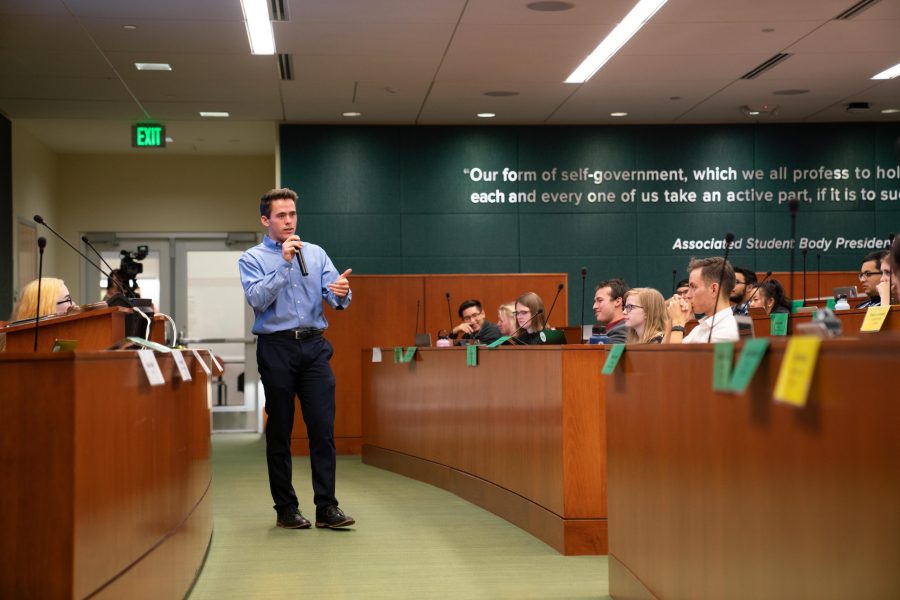 Associated Students of Colorado State University Senator Christian Dykson speaks about why he believes he should be elected as University Issues Chair, Oct. 16. (Nathan Tran | Collegian)

Former senator Austin Fearn announced that he’s stepping down from his position as University Issues Committee chair and as a senator in order to deal with family issues. He said that certain things concerning his family and personal life require his attention.

“To be quite frank, I have been using Senate as a means of ignoring those things,” Fearn said. “I enjoy it a lot, but I also have to deal with the real world. So, I’m stepping down because I need to deal with my life and with myself.”

We try to build a connection that can create a vision where people feel engaged.” -Senator Christian Dykson

As he announced his resignation, Fearn emphasized that those remaining should remember to connect with and care about the other senators in the room.

“We’re still humans; we still love,” Fearn said. “You have some sort of compassion, some sort of idea of what it means to be a student.”

Senator Savanah Overturf and Senator Christian Dykson were both nominated for chair of the University Issues Committee.

“We try to build a connection that can create a vision where people feel engaged,” Dykson said. “They feel respected, and they want to contribute their voice. As the chair of University Issues, that is exactly what I will be doing.”

“He can do well as a chair,” Benitez said. “I feel like he has a vision, and he knows where he’s going, and he knows how to get there.”

Chief of Staff Melissa Quesada presented a series of projects and initiatives the executive team has been working on. This presentation included but wasn’t limited to talk of scooters on campus, an ice rink for students and a flu vaccination drive.

When scooters arrive on campus, Quesada said they will be geomapped and geolocated so they can go all over campus and town. There will also be features included that prevent the scooters from being kept in dorms or from speeding through dismount zones.

“They will definitely be a lot of fun for us to utilize, but we’ll also be enforcing safety guidelines,” Quesada said. “There has been a lot of planning with this, and we’re really excited to bring those to campus.”

Another new announcement was that of Rams on the Ice, a project to bring an ice rink to campus during February for students to use for free.

“You should be excited,” ASCSU President Ben Amundson said. “It’s gonna be one of the coolest traditions in CSU history, in my opinion. You can go ice skating in February. Maybe with a loved one, maybe with a friend, maybe by yourself.”

The vaccination drive is also an effort to take care of the community around CSU.

“The flu probably doesn’t matter to you as much as it matters to the elderly people in America,” Amundson said.

ASCSU will be partnering with the Health Network to create a larger influenza vaccination effort on campus.

“We’re going to vaccinate tons of people and help students,” Amundson said. “We’ll be involved, and it’ll help us protect the community.”