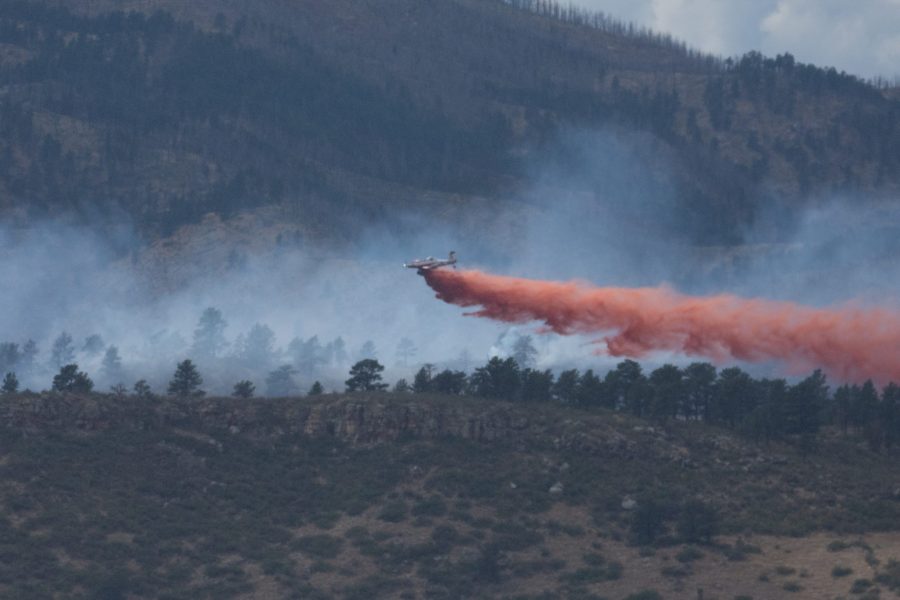 A slurry plane drops fire retardant on the Skyline Fire near Horsetooth Reservoir Sept. 5. A suspect is in custody for charges of arson relating to the fire. (Matt Tackett | The Collegian)

The Skyline Fire that burned on the north side of Horsetooth Reservoir Sept. 5 is now fully contained and is suspected to have been caused by a man who committed arson, according to a press release published by the Larimer County Sheriff’s Office.

Deputies working at the scene of the fire began searching for 34-year-old Robert Crookston McGehee of Fort Collins upon learning he walked away from the incident after being involved in it. McGehee was later located in the 1200 block of North County Road 23 and was taken into custody.

McGehee has since been booked into the Larimer County Jail on allegations of second degree arson, a Class 4 felony, and criminal mischief, a Class 6 felony.

Annie Bierbower, the public information officer for the Poudre Fire Authority, said the Skyline Fire is now fully contained and will not be growing, and the PFA will monitor the area overnight.

The PFA will also look at the area of the fire tomorrow to assess any risks, but Bierbower said people should expect to see smoke and hotspots in the area overnight, which is normal.

Bierbower said no structures were burned in the fire and no one was injured.

Anyone who has any information regarding the fire should call LCSO investigator Justin Atwood at 970-498-5143.

Colorado State University students were able to see smoke northwest of campus earlier this afternoon, alerting many to a potential fire.

The Poudre Fire Authority responded to a wildland fire on the north side of Horsetooth Reservoir on Sept. 5. The most recent update from the PFA Twitter said the fire has been about 75% contained.

One helicopter air resource is currently dropping water & filling at Horsetooth Reservoir. Two more air resources (seats) will arrive shortly & drop retardant around the perimeter. The fire is about 75% contained at this time according the Battalion Chief on scene. #SkylineFire https://t.co/GqrtgBKFwp pic.twitter.com/s0ck8McsyQ

The PFA has also advised Fort Collins residents to avoid the area and has announced via Twitter that Highway CR23 is closed between CR42C and CR25G. Seeing smoke and aircraft in that area can also be expected.

According to the tweet, the PFA has been using one helicopter air resource to drop water from Horsetooth Reservoir on the fire. Two hours ago, the PFA wrote that two more air resources will be arriving shortly to drop retardant around the perimeter of the fire.

For more updates about the wildland fire, residents can check the PFA Twitter or contact the PFA at 970-416-2891