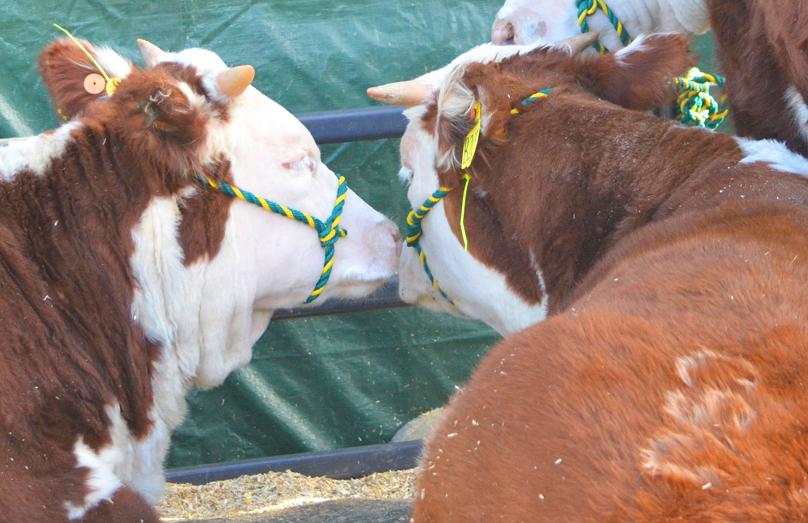 The CSU Seedstock Merchandising Team's Hereford heifers on a break during the 2015 National Western Stock Show in Denver. (Dixie Crowe | The Collegian)

Colorado State University is one such partner.

With plans for the center to break ground in 2020 and an initial opening date in 2022, CSU’s portion of the NWC will feature three buildings, each focusing on something different.

According to the NWC’s website, the areas of focus on the NWC site are intended to encompass subject areas relevant to pressing global issues and to fit within a context of arts, culture and economic development.

“If my memory is correct, there was a memorandum of understanding that was signed in 2013,” said Jocelyn Hittle, senior director of sustainability in Denver programs for the CSU system.

The memorandum was signed by the project’s five founding partners, which are:
• The CSU system
• The city and county of Denver
• The Western Stock Show Association
• The Denver Museum of Nature and Science
• History Colorado

I think it’s that it gives students access to what Denver has to offer, and I hope that students will come and take advantage of that access.” -Jocelyn Hittle, senior director of sustainability in Denver programs for the CSU system

Hittle said that, in 2014, a master plan for the NWC was created, and in 2015, partners began to focus on funding the project.

She said since the project’s inception, many other partners have gotten involved with the project, including Denver Water and the Dumb Friends League.

Regarding the aspects CSU would focus on, Hittle said animal health was a key topic since the beginning due to the NWC’s proximity to the National Western Stock Show.

“During the stock show, there’s both livestock events and equestrian events,” Hittle said, adding that the animal health building would have an emphasis on sports medicine for horses.

“We’ve built additional programs around that, including a collaboration with Dumb Friends League to provide a small animal clinic that is for low income families,” Hittle said. “There’s also equine-assisted activities and therapies offered by the Temple Grandin Equine Center.”

For each building, CSU is placing emphasis on public involvement, especially that of youth.

“We want families to plan to come to these spaces on a Saturday with their kids,” Hittle said. “We want to introduce young people to careers that they may not have thought about.”

Another core idea that the NWC will pursue is food and agriculture. Hittle said this core value would also be used to share the industry with youth.

“We want to show that working in food systems is also about drones and sensors in the soil and GPS technology,” Hittle said. “The way that food is produced now is not what people expect, and we should introduce them to those potential careers.”

Hittle said the inspiration for a building that would focus on water and water systems came from the fact that the South Platte River makes up the western boundary of the NWC.

“We really wanted to leverage being able to access the river and giving kids access to this urban waterway that connects the mountains to our agricultural lands,” Hittle said.

One consideration that has been a focal point for CSU during the development of the NWC is what would make the NWC unique in comparison to CSU Fort Collins or CSU Pueblo, Hittle said.

Hittle also drew attention to the prominent differences between this project and other CSU campuses.

More information about CSU’s role with the NWC can be found on CSU’s website.