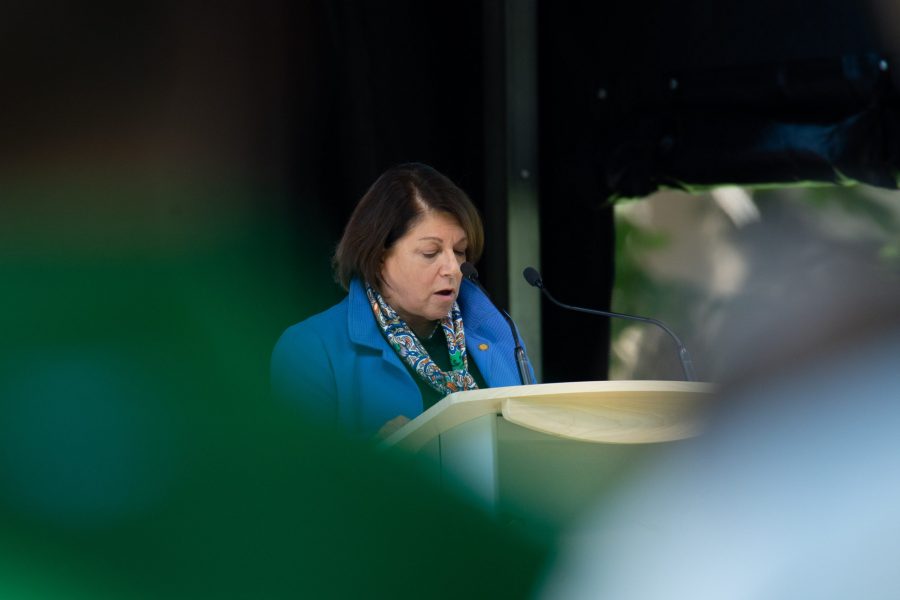 Colorado State University President Joyce McConnell delivered her first Fall Address Sept. 19 at The Oval. The address included the announcement of a Race, Bias and Equity Initiative and was interrupted by a silent #NotProudToBe protest.

The protest and initiative come after racist incidents that occurred on campus since the start of the fall 2019 semester, including a blackface photo and a swastika found on a wall next to a Community Coordinator’s apartment in Lodgepole.

McConnell began by saying how grateful she was to give her first ever Fall Address.

“I ask you to tend to our students, faculty and staff who are here at CSU and do not feel safe or valued because of racism and other forms of bias,” McConnell said in the beginning of her address. “We suffer from some of the same pains that our nation suffers from now.”

McConnell discussed the racism and forms of bias she was referring to.

“Over the last few years, this campus has been the site of a number of incidents of bias,” McConnell said. “Most recently, a photo of four of our students in blackface was posted to social media, and last night, we discovered a swastika on the wall in one of our apartment complexes.”

McConnell said racism and bias were “antithetical” to the core missions of higher education.

“Robust debate on a public campus is protected by the First Amendment, but this does not mean we are powerless to fight for change through powerful engaged discourse, action and accountability,” McConnell said.

She said that, though CSU has strived to promote equality through longstanding efforts, “they have clearly not been enough.”

We owe it to all our students to create an environment in which they can flourish and succeed.” – Joyce McConnell, 15th president of Colorado State University

McConnell then addressed victims of bias and racism at CSU.

“I am deeply sorry for all the ways that we have failed you,” McConnell said. “You have the right to be angry, and we respect your outrage.”

Around this point in McConnell’s address, hundreds of students dressed in black and marching arm-in-arm walked past the stage McConnell was delivering her speech from as part of the #NotProudToBe protest.

McConnell was quick to announce she was “very proud of the students exercising their First Amendment rights.”

The crowd then held a nearly two minute-long standing ovation of applause for the remainder of the students walking through the venue, after which McConnell continued.

McConnell announced the creation of a Race, Bias and Equity Initiative, saying, “I believe this could have a proud and positive impact here at CSU.”

Explaining the details of the initiative, McConnell cited a similar initiative from the University of Washington, saying it helped reduce incidents of bias and made it possible for diverse students with diverse perspectives and ideas to feel safe, to learn and succeed.

She explained the initiative would include students, faculty and staff.

“It will encompass both short-term and long-term actions that will be implemented with urgency and courage,” McConnell said. “Our efforts will be at the individual, institutional and system levels. However, I want to make clear, the burden isn’t on our students; it’s on us.”

McConnell discussed her predictions about what will happen following the creation of the initiative.

“We owe it to all our students to create an environment in which they can flourish and succeed.”