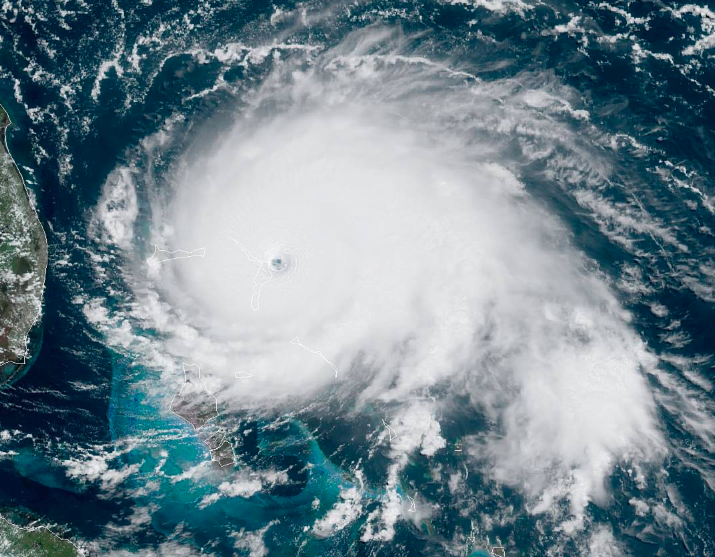 As a freshman biochemistry and molecular biology major, Khalfani has experienced many hurricanes before, but Hurricane Dorian was different.

Hurricane Dorian was the strongest hurricane to ever affect the Bahamas, ranking at a category five, according to Ben Trabing, a graduate student studying atmospheric science.

Since Hurricane Dorian formed on Aug. 24, the Bahamas, Puerto Rico, the East Coast of the United States, the Lesser Antilles and Atlantic Canada have all been affected.

“After more than two weeks since Dorian made landfall, at least 50 have died and 1,300 people are still reported missing,” wrote professor of anthropology and geography Kate Browne in an email to The Collegian. “There is no accurate count of those who do not have access to food or water, but estimates indicate that at least 13,000 properties were severely damaged or destroyed, thrusting thousands of people into homelessness.”

The death toll continues to rise in the Bahamas as rescue missions continue. Government officials from the Bahamas estimated the casualties to be “staggering,” with 200 body bags being sent to the Abaco Islands alone.

“My house was flooded,” Khalfani said. “My mom now has to find a new place to live. My family is fine, they’re okay, but my mom, as a police officer, has to go into those areas where she has to go rescue people, so her safety is at risk at the moment because of it.”

Hurricanes need specific factors to form — warm ocean waters, a favorable environment, some spin from thunderstorms and a pre-existing area of thunderstorms, Trabing wrote in an email to The Collegian.

“Island societies are especially vulnerable to severe weather,” Browne wrote. “On small islands such as these, there is no route that leads far enough inland to be safely out of harm’s way. It is only possible to evacuate to another part of the island.”

When Khalfani was younger, they would wait out the hurricanes by playing board games. The windows of her house were equipped with hurricane shutters to protect from flying debris. Food, batteries, candles and a portable radio were among some of the necessities needed to brace the storm.

This time, she could not distract herself with board games.

“I wasn’t able to speak to my mom for days before I knew she was okay, or our family,” Khalfani said. “I still don’t know about other family relatives if they’re okay.”

Islands like Puerto Rico and the Bahamas are more vulnerable to hurricanes because they do not have the opportunity and resources to evacuate. Finding a safe shelter is the only option, Trabing wrote.

“We do not yet know the full extent of Dorian’s devastation or how long it will take communities to recover,” Browne wrote. “We do know that the Houston area communities affected by the massive flooding from the 2017 Hurricane Harvey rain bomb — 60 inches of rain in some areas — are still recovering two years later.”

For those affected emotionally or physically by Hurricane Dorian, CSU Health Network has staff who can help through emotional distress. There are also organizations that help provide relief for those that have been affected, including Habitat for Humanity, Mental Health America or the National Association of Student Financial Aid Administrators.