CSU’s lagoon renovation hopes to add character to the area 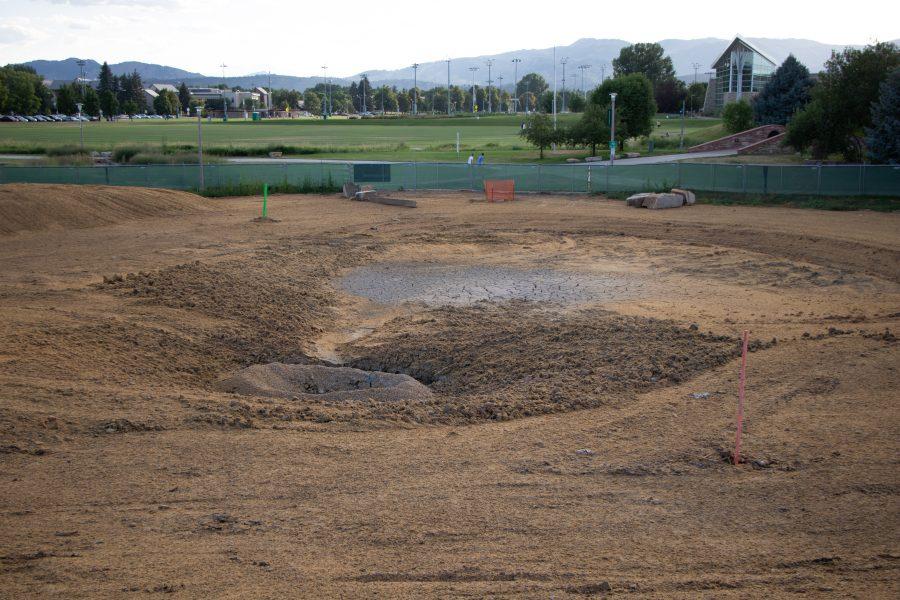 Photo of the CSU Lagoon while it is under construction. It is planned to be done during the summer of 2020. (Devin Cornelius | Collegian)

Colorado State University geese are getting a stomping ground upgrade in the form of a new lagoon.

As many students may have noticed, CSU’s lagoon, located on the West Lawn of campus, has been undergoing renovations. David Hansen, the University landscape architect, said the lagoon has been needing an upgrade for quite some time.

“The lagoon was originally constructed in the ’60s with the Student Center,” Hansen said. “It had only been renovated one other time since that original installation, and there were a lot of issues with it.”

Hansen said the old lagoon leaked quite a bit and needed to be updated from a general maintenance perspective.

The original lagoon was almost an acre in size, and Hansen said the renovation will reduce the body of water by half. This will give students, faculty and visitors more space on the West Lawn and will be a more maintainable solution.

“From an evaporation and sustainability standpoint, having that much water just sitting isn’t a very sustainable practice,” Hansen said. “We wanted to scale the size of the water down, and in doing that we’ve created an entirely new system that will more or less have a wetland component to it. The water will be circulated through the pond, cleaning the water from any pollutants.”

Hansen said that before the renovations, the lagoon had no circulation system, so the water wasn’t clean.

Tony Flores, project manager, said that although the size of the pond will be reduced, it will be a general improvement in the end.

“We’re making it a better place,” Flores said. “It’ll be a little smaller, but it needed an upgrade; it has been deteriorating stuff underground on campus.”

Flores said that phase one, which involved raising the sidewalk near Braiden Hall, has already been completed, and phase two will begin after football season.

“In phase two, we will begin working on the lagoon and trying to provide better drainage in that area,” Flores said.

Hansen also said that once the lagoon is complete, the entire West Lawn will also be renovated.

We wanted to scale the size of the water down, and in doing that we’ve created an entirely new system that will more or less have a wetland component to it.”-David Hansen, University Landscape Architect

“We’ve had problems in this area in the past,” Hansen said. “The lawn becomes very wet, and it’s been hard for the Student Center to hold programs and events on the lawn, so hopefully we will be improving that situation as well.”

The West Lawn construction will begin in November and last until June 2020, Hansen said. There will be a new construction fence around the entire west lawn, and the bike path that leads over the bridge will be closed.

“We are going to be adding a soft surface trail around the lagoon, so like a crushed granite that will loop the entire body of water,” Hansen said. “There will also be sandstone boulders along the edge so you can actually sit and put your feet in the water.”

According to Hansen, there will be more vegetation planted around the lagoon to add more life to the edge and to provide more shade for warmer days.

“Before, it used to have a concrete curb and just grass,” Hansen said. “Now, it’s going to have an entirely different feel and character.”

Hansen said that conversations around whether or not the lagoon should be replaced began circulating last year.

“We got a lot of feedback from faculty, staff and some students who said that this was one spot they really remembered as they did campus tours,” Hansen said. “They felt that it was something that needed to be preserved in some manner. That led to us preserving it and making it a more appealing environment.”