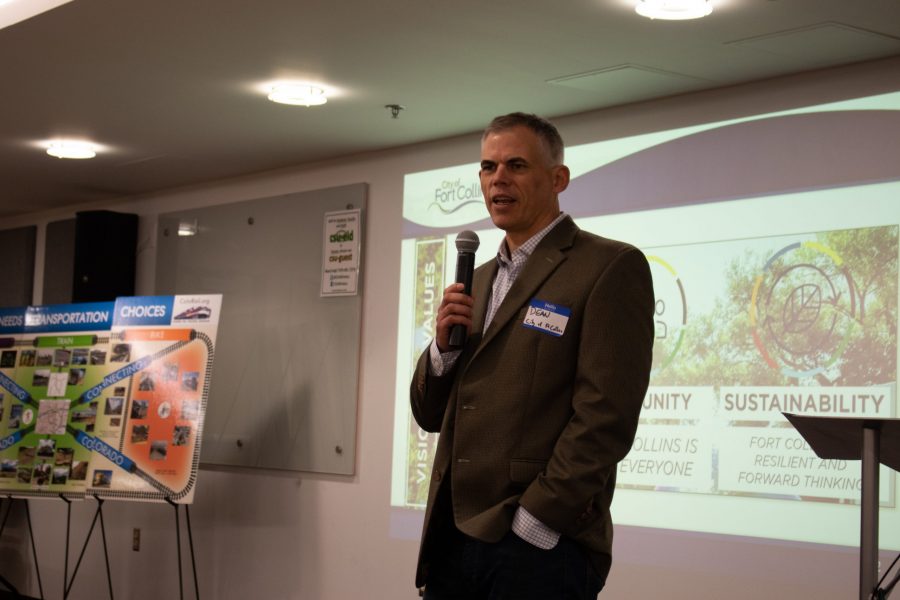 Dean Klingner, City of Fort Collins interim director of planning, development and transportation, speaks at the Fall Progress and Issues for Colorado Passenger Rail meeting in Morgan Library, Sept. 27. He discussed the vision and values of the city of Fort Collins, to consider while discussing the vision for Front Range Passenger Rail: livability, community and sustainability. (Anna von Pechmann | Collegian)

A future of commuting from Fort Collins to Colorado Springs, without traffic, is one step closer to becoming a reality.

The Colorado Rail Passenger Association held its 2019 fall meeting in the Morgan Library Friday morning, where the possibility of a passenger rail line connecting Fort Collins and Pueblo was discussed.

“We know about the demand for inter-regional transit across the Front Range and Colorado, as evidenced by Bustang, which continues to exceed expectations,” Troxell said. “So this is just the beginning of the kind of connectivity we need regionally and throughout the state.”

You can’t do much of anything without a connected community and that fundamental building block of transportation.” -Dean Klingner, Fort Collins interim director of planning, development and transportation

“No matter how great of a system we build in Fort Collins, it doesn’t work if it stops at our City limits or it doesn’t connect or integrate and work with the system,” Klingner said.

Klingner said that, when talking to the community about transit, the overwhelming message they received was that transit in Fort Collins goes to where people need to be, but it doesn’t go often enough.

“This is an important connection,” Dodge said. “It connects two different east to west national lines but also connects the Front Range of Colorado, which gets cars off I-25 and makes this a more comprehensive service.”

“We’re growing, and we’re growing very quickly,” Dodge said. “We need to recognize that and be proactive about those sorts of things.”

Quite frankly, this train is going to used by everybody. It’s going to be used by people who don’t have cars, by tourists, by people who are just passing through,” -Spencer Dodge, commission public liaison of the Southwest Chief and Front Range Passenger Rail Commission

As the baby boomer population moves into retirement, Dodge said it’s important to give more transportation options for people who can’t drive.

Dodge also said younger crowds are increasingly less inclined to drive, as cars can be an expensive added cost in their lives.

“We’ve received great support for our passenger rail initiative up and down the Front Range,” Souby said.

According to the Southwest Chief and Front Range Passenger Rail Commission, a Front Range passenger rail service would benefit all Coloradans.

The rail service would link Pueblo, Colorado Springs and Fort Collins to Denver as a 173-mile corridor that contains the majority of Colorado’s population, according to the Commission.

“Quite frankly, this train is going to used by everybody. It’s going to be used by people who don’t have cars, by tourists, by people who are just passing through,” Dodge said. “So, yes, that is a key point, we are going to be reaching out.”

Correction: This article has been updated to reflect the most accurate information pertaining to quotes from Spencer Dodge, the public liaison of the Southwest Chief and Front Range Passenger Rail Commission.