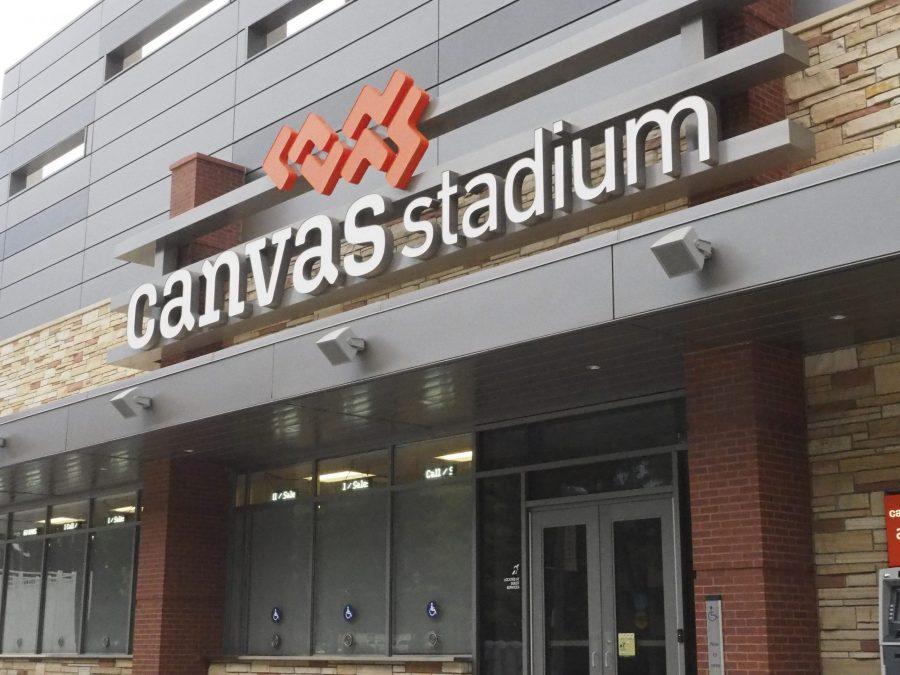 Canvas Stadium logo outside the will call office. The host to CSU rams football home games, Canvas Stadium revenues are outpacing the projected profits for this year. (Gregory James | Collegian)

Canvas Stadium reported a growth of $3.2 million in profits during the 2018-19 fiscal year, which is higher than previous projections, according to a financial statement from the athletic department at Colorado State University.

Revenue from Canvas Stadium increased by $1.5 million over the 2017-18 fiscal year, with another $1.75 million added from tax cuts, according to a SOURCE article.

“Net income from Canvas Stadium operations goes to stadium reserves, academic enhancement and to support the other non-stadium operations of the athletic department,” wrote Kyle Neaves, associate athletic director for communications, in an email to The Collegian.

Stadium reserves are funds that are set aside for future needs related to operations and bond payments of Canvas Stadium, Neaves wrote.

For the 2018-19 fiscal year, Canvas Stadium reported over $300,000 in general operating expenses and over $8 million in bond payments, according to the financial statement.

Various revenue streams allowed for reinvestment in the athletic department’s programs, making an annual $8 million payment on Canvas Stadium and providing $200,000 to support academic programs at CSU, according to the SOURCE article.

The amount of revenue reinvested in athletic programs is unspecified.

To fund academic enhancement, the athletic department returns money to the Office of the Provost to be distributed for academic pursuits, according to the SOURCE article.

The funds contributed to the Office of the Provost last year were used in the development of digital learning, said Rick Miranda, provost and executive vice president of CSU.

“The funds that we were given went towards developing digital coursework, as well as hardware acquisition,” Miranda said. “Projects funded by money given to the Office of the Provost by Canvas Stadium have not yet been completed but have submitted positive reports.”

The establishment of Canvas Stadium allowed for the funds to be allocated for academic enhancement.

“Last year was the first time that we had received this money from the athletics department because it was the first year that Canvas Stadium was open,” Miranda said.

This year, the Office of the Provost has an inclination to continue funding the projects started last year, Miranda said.

While Canvas Stadium reported a $3.2 million increase to revenues, the contributions of the athletic department to academic enhancement were reduced by $300,000.

The athletic department invested nearly $2 million back into athletic operations, which is an $870,930 increase from the previous year.

Reported profits from Canvas Stadium are significantly higher than profits projected by a feasibility study done in 2012 to prove the profitability of constructing a new stadium, according to athletic department financial statements.

While profits are higher than anticipated, so are the expenses, which have been greater than those predicted in 2012.

According to the SOURCE article, total expenses exceed the 2012 CSL model by more than $1.5 million because of changes in the landscape of security and fan expectations since initial projections. Game day expenses were reduced by almost $200,000 during 2018 due to aggressive cost-containment steps.

This reduction occurred despite an extra $70,000 that was spent on game day staffing and equipment, according to the SOURCE article.

Corbin Reiter can be reached at news@collegian.com and on Twitter @CorbinReiter.