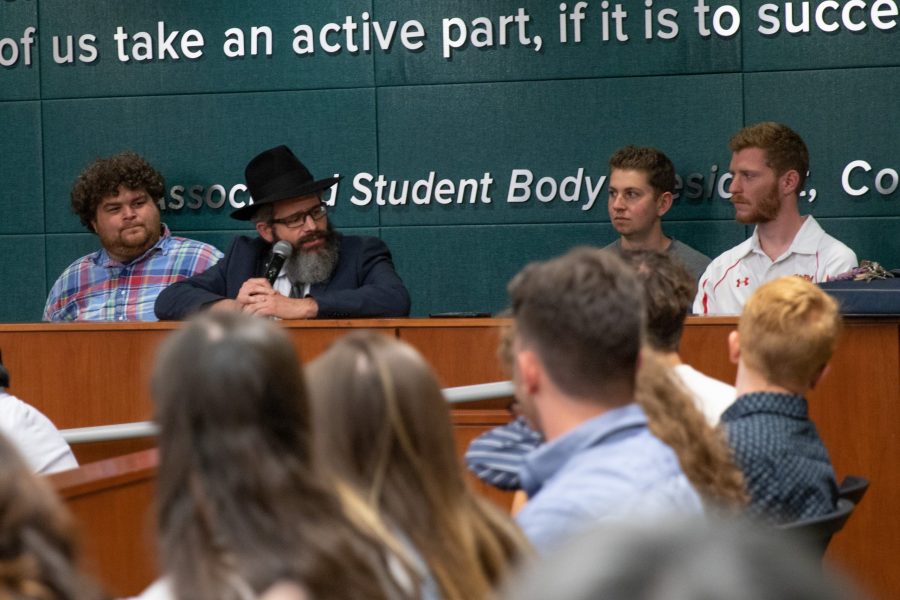 Rabbi Yerachmiel Gorelik, one of Fort Collins and CSU's community leaders, provides an optimistic outlook on the future and to look at the bright side of dark situations. (Nathan Tran | Collegian)

The Associated Students of Colorado State University unanimously voted to pass a resolution and a bill meant to support the University’s Jewish community.

Members of many Jewish organizations, as well as concerned students and community members, attended the ASCSU meeting to discuss recent anti-Semitic events in hopes of seeing change.

Specifically, many students spoke out against the incident of a swastika found in Aggie Village.

I just want to encourage the student body to actually do something.” -Kenny Shuster, vice president of CSU Hillel

Leora Greene, engagement intern and secretary for Hillel, said she lives on the floor below the one that was vandalized, and this act hit too close to her literal home.

“The next morning, I felt the need to subconsciously check the door behind me as I was leaving for my class to make sure that my place wasn’t targeted next,” Greene said.

Denise Peters, president of Students for Holocaust Awareness, said this act is about more than just the Jewish community, and everyone should be upset.

Kenny Shuster, vice president of Hillel, asked for a change to happen in the student body.

Shuster also read a message from Hillel’s president, Linzy Upton-Spatz, that said the University and the student body can no longer protect the right to express hatred.

These calls for accountability and support were followed by two unanimous votes to support the Jewish community in the form of a new resolution and bill.

ASCSU President Ben Amundson authored a resolution calling for the student body to take a stand against anti-Semitic words and actions.

This resolution passed with a unanimous 41-0-0 roll call vote.

Resolutions put our voices out there, but actions speak louder than words.” -Alex Benitez, ASCSU senator

“When I think of the swastika, there is not a symbol on this planet that is more purely hatred,” Amundson said. “It is so clear; there is nothing good about it.”

Amundson said the resolution regards the swastika incident as an act of hatred that should be offensive to all of humanity.

“When a student carves that on campus, you don’t need to stop and think about it,” Amundson said. “You say that that’s not part of our University. That’s not a part of our community.”

Amundson said it is also on the agenda to revise the University’s Student Conduct Code to make harassment and discrimination a priority to address.

ASCSU Deputy Chief of Staff Zach Simon endorsed the resolution and helped present it, saying this is the first step in a long list of things the organization is currently working on.

“This organization is working hard to do a lot more than this,” Simon said. “We’re not going to stop with this resolution.”

Director of Finance Reagan Bailey and Chief of Staff Melissa Quesada wrote a bill that would fund $14,655 toward Holocaust Awareness Week.

This bill passed with a unanimous roll call vote.

Senator Alex Benitez said this is something that actually has action behind it.

“This is more than a resolution,” Benitez said. “This is causing awareness to our campus. This will speak volumes to our community. Resolutions put our voices out there, but actions speak louder than words.”

Executive projects for campus
The resolutions are good, but it does not stop there. This conversation has to keep going.” -Ben Amundson, ASCSU president

Amundson announced a few projects ASCSU has been working on, including a community garden initiative, cap and gown rental, open educational resources and a voter registration initiative.

Amundson also spoke about upcoming inclusion and diversity projects, which includes a letter from students to students: a project collecting the thoughts from students across campus in reaction to the recent events.

Amundson also hopes to promote campaigns to create a conversation about what it means to say “Rams take care of Rams.”

“We know the past couple of weeks have been tough,” Amundson said. “The resolutions are good, but it does not stop there. This conversation has to keep going.”

Correction: This article has been updated to reflect more accurate information about the groups and organizations present at the ASCSU meeting.