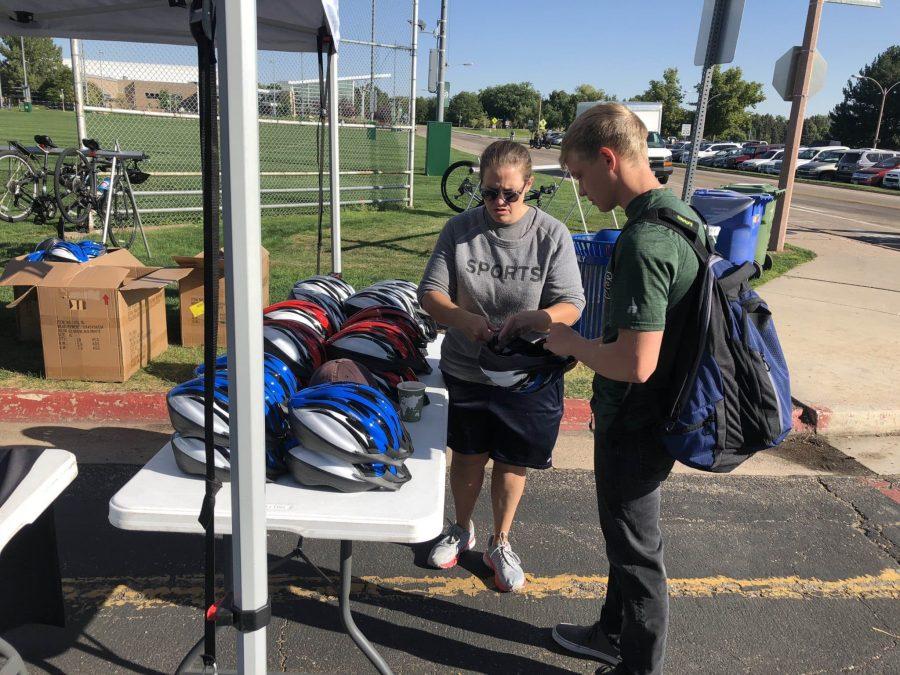 A student looks at free helmets offered during the Rams Ride Right event on Sept. 17. (Marshall Dunham | The Collegian)

Colorado State University is a Platinum Bicycle Friendly University, but what exactly does that mean?

“A platinum-level Bicycle Friendly University is an exemplary campus for bicyclists,” according to the League of American Bicyclists’ website. “At every level, the campus welcomes cycling and has made it a great option for transportation and recreation.”

Furthermore, Fort Collins offers more than 280 miles of wide bike lanes and over 30 miles of multi-use trails. Opportunities for road biking and mountain biking can be found in any direction.

“Rams Ride Right is an education enforcement campaign that we do every Monday, Wednesday and Friday,” explained Aaron Fodge, alternative transportation manager at CSU. “The purpose of the interview is to intercept people on the street obeying the traffic laws.”

Fodge explained that the program often sets up near dismount zones and stop signs on campus.

Signage and a volunteer are stationed before a stop sign reminding cyclists to stop at the upcoming sign. If the cyclist doesn’t stop, CSU police units will pull the cyclist over.

The program also offers free helmets to those who don’t have one.

“It’s funded in two ways,” Fodge explained. “One is the Alternative Transportation Fee Advisory Board, which is a student board. They fund the RamCash that we’re giving away. Parking and Transportation Services funds all the food and the helmet giveaways.”

Though not offered this fall, CSU also hosts community bike rides in the spring and summer.

“These rides help new bicyclists learn skills, gain confidence and build community,” according to CSU’s website. “Each ride features a specific topic, and participants will also receive a free lunch, hosted by members of the Campus Bicycle Advisory Committee, including Parking and Transportation Services, CSU Police Department and Central Receiving.”

The website goes on to explain that the community rides aim to increase the number of female cyclists in the CSU community.

“The Community Ride Series was originally developed as part of CSU’s Ripple Effect initiative in 2015 and is specifically designed to address the barriers to bicycling most commonly reported by women, including concern for safety and logistical considerations like biking with kids and finding the right gear,” reads the website. “While the rides were developed with women in mind, we invite everyone to come join in the fun.”

“We pair Rams Ride Right with Bike to Breakfast, where we encourage everyone to bike,” Fodge said. “We give them free breakfast and have them place a dot on the map, telling us where they rode in from.”

Fodge explained that the maps were color coded, showing which cyclists were students, faculty and visitors.

Indeed, the only thing better than riding your bike to class is getting a free breakfast burrito for doing so.

“We teach this class called Smart Cycling,” Fodge said. “It’s a certificate program by the League of American Bicyclists. It’s a free class, and all students walk away with a credential that they can put on their resume.”

The class aims to teach the basic rules of road cycling while improving basic skills and confidence.

Fodge went on to explain that the class includes classroom portions as well as live, on bike training.

“The Spoke is a student fee-funded program on campus,” Fodge explained. “They have a bike shop over in Laurel Village. It’s student-run.”

The bike shop offers all sorts of services and parts, including tubes, tires, chains, brake pads, locks and helmets.

“If you want to get your bike maintained, you come into the shop, the student will train you on how to maintain your bike and then you’ll do it,” Fodge said. “If you want them to do it, there’s a fee.”

Fodge explained he noticed that people who don’t properly maintain their bikes don’t ride them as often, especially in the winter.

“We think by learning, you’re taking pride and ownership in your bike,” Fodge said.