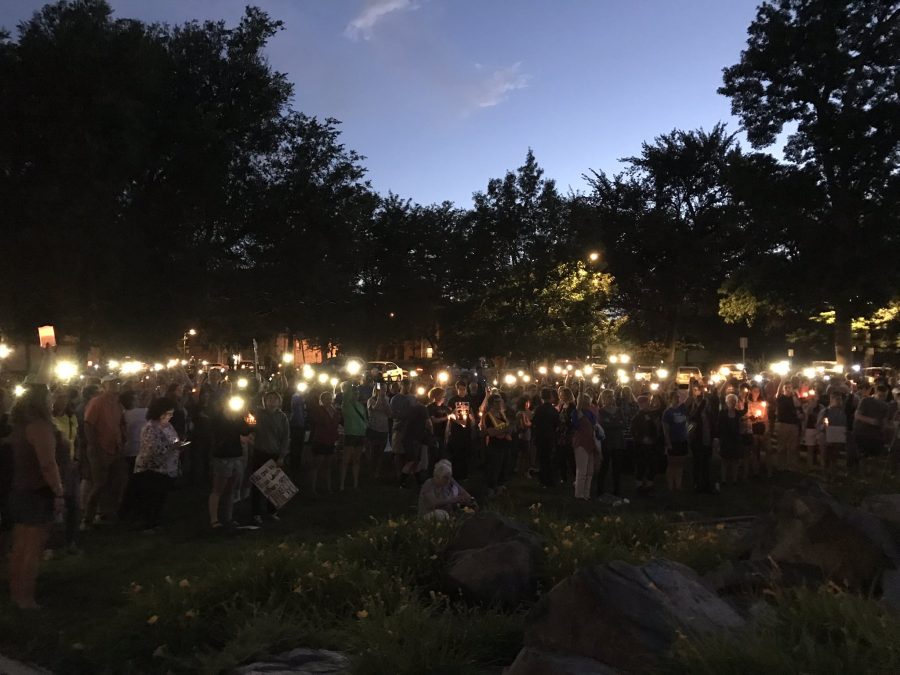 Part of a nationwide movement to protest migrant detention camps and family separation practices in the United States, the Lights for Liberty vigil at Civic Center Park in Fort Collins saw an attendance of more than 150 people. (Samantha Ye | Collegian)

Over 150 people attended the Fort Collins Lights for Liberty vigil Friday night at Civic Center Park as part of a nationwide movement to protest migrant detention camps and family separation practices in the United States and to support the affected immigrants.

The event comes as a new wave of reports detailing the camps’ overcrowded and unsanitary conditions sparked fresh outrage, and nationwide raids to arrest and deport undocumented immigrants are set to begin Sunday, according to The New York Times.

“This is not about border security,” said Kristin Stephens, Fort Collins City councilmember and mayor pro tem, regarding migrant detention camps. “No, this is an exercise in cruelty by an administration that does not seem to respect or value human life.”

Nearly 800 individual Lights for Liberty vigils were scheduled across the country and Canada, including 11 of them in Colorado.

Although the four event co-hosts — Indivisible NOCO, Fort Collins For Progress, Alianza NORCO and the Colorado Immigration Rights Coalition — each have different missions, they were “united at the intersection of justice and humanity,” said Monica Lynn of Indivisible NOCO.

Local representatives and immigration activists spoke to condemn the camps and shared ways the protesters could take action, starting with contacting their government representatives.

Patricia Miller, executive director of Alianza NORCO, was one of several speakers who shared their experiences with immigration.

Miller said when she was 11 years old, she and her sister fled to the United States from El Salvador during its civil war, leaving her mother and brother behind.

“The trauma of immigration-related separation and loss, even for a status-privileged little girl like me, left scars in my heart that remain to this day,” Miller said. “I cannot fathom adding in incarceration, disease, abuse, starvation, loneliness and uncertainty to the pain and hardship of immigration, but that is what we’re witnessing.”

From April to June 2018, the Trump administration’s “zero tolerance” immigration policy separated at least 2,648 migrant children from their families, according to a new report from the House Oversight Committee’s staff.

The original policy has since ended, but officials say it could take up to two years to reunite all the children with their families, the Los Angeles Times reported.

Unattended children and adults are held in detention centers which have struggled to accommodate an influx in family crossings, according to USA Today.

This has resulted in overcrowded and dangerous conditions. At least six migrant children have died under U.S. custody since last December.

After his Friday visit to two camps, Vice President Mike Pence said the camp conditions were unacceptable, according to CNN.

We need to be clear that every person who participates in this is contributing to crimes.” -Cathy Kipp, Colorado House Representative for District 52

“What surprises me is not the amoral policies of an amoral president, but that others are willing to follow along and carry these out,” said Cathy Kipp, Colorado House Representative for District 52, including Fort Collins.

Kipp admonished the “normalization” of family separation and said “following orders” is no excuse for keeping children in appalling conditions.

“We need to be clear that every person who participates in this is contributing to crimes,” Kipp said.

Although Fort Collins City Council has not yet addressed the border camp situation, Stephens came to speak on behalf of herself.

Stephens said she was told to stay in her own lane and stick to local issues the last time she spoke out about the issue.

“But we find ourselves at a time of moral reckoning, and as a mother and a human being, I cannot be silent,” Stephens said. “To be silent is to be complicit.”

Stephens implored attendees to build a better and more just world by voting out people who are bad leaders. She emphasized the importance of electing empathetic leaders in the 2020 election.

Councilmember Ross Cunniff was also present at the vigil, but he wasn’t a speaker.

Event organizers offered some immediate courses of actions protesters could take, one of which was calling or writing senators to close the migrant detention camps and return children to their families.

After the candlelight vigil, dozens of attendees stayed to write postcards to Sen. Cory Gardner, urging him to support the Dream and Promise Act. The act would open paths to citizenship for certain groups of undocumented immigrants.

Event attendee Erin Hottenstein said she would definitely be contacting her Congress representatives, because “they need to hear from us.”

“It’s been a whole year it’s been going on and … it’s become a new normal,” Hottenstein said of migrant detainment. “Events like this help give you fresh energy and remind you that the problem hasn’t gone away and that you need to still be paying attention to it.”