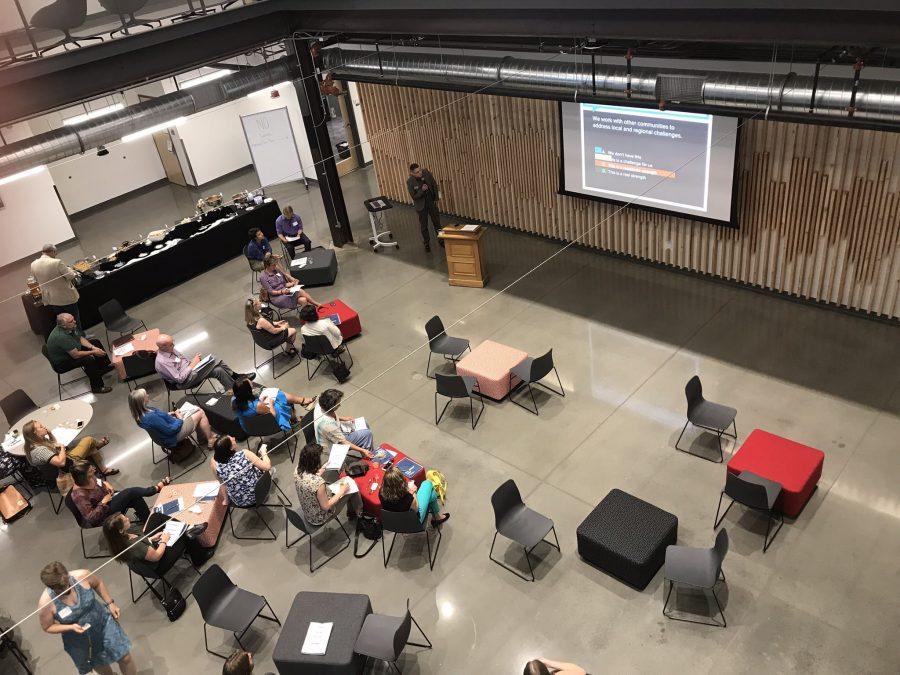 The Center for Public Deliberation held a gathering to share some of the new changes they have added to their center, including a new office space and pricing plan. (Samantha Ye | Collegian)

With demand for its services on an exponential rise, the Center for Public Deliberation is bringing in some new changes, including a pricing system and new assistant director. Both debuted at a small event on Wednesday.

The CPD is a Colorado State University unit that runs community forums about different issues. They train students to be facilitators who then help community attendees deliberate complex “wicked issues” through small-group discussions. After events, they organize and analyze the data collected for followup.

In the past, they have hosted forums for the Fort Collins affordable housing plan and CSU strategic plan.

Parks said she hopes to bring her own research in good listening to the CPD’s dialogue process.

“One thing I love about (Parks’) work is she spends as much time thinking about listening as we do about talking,” said Kalie McMonagle, CPD’s program coordinator. “What are the responsibilities of a city councilmember or a supervisor or a president to listen? And it’s not an easy job by any means, but her research helps us think about that in different ways.”

The CPD has always been an experiment in civil discourse, McMonagle said. Now that they have received a national award and are receiving more forum requests than they can accept, it’s clear the experiment has worked, she said.

If we have achieved our goal, people will look at northern Colorado and say, ‘That’s the way democracy should work.’” -Kalie McMonagle, CPD program coordinator

“And we decided we didn’t want to do more; we wanted to do better,” McMonagle said.

The Center has been working with partners to find new “juicy projects” to take on, McMonagle said. They still have three open slots for this year.

The facilitator-group format will generally stay the same, but one thing will be different: running the programs will no longer be completely free of charge.

According to a CPD Partnership Guide, they will now charge different rates depending on who is looking to host the project.

Partner rates start at $60 an hour.

The charges cover only the cost of running or marketing the event, McMonagle said. Since the student facilitators earn education and University credit by participating in events, CPD will continue to not charge for the students’ services.

CPD can collaborate with partners to secure grants for project funding.

“In a way, I’m glad they’re charging,” said Kristin Stephens, City Council mayor pro tem. “They provide a valuable service. When they’re involved in issues, I think the people who are present come away with a better understanding of how other people feel.”

Stephens said she has worked with CPD on CSU parking matters and hopes to engage with the Center even more as a City.

Several other City councilmembers attended the event, as well as other regular CPD partners.

All these changes will help CPD achieve their audacious goal of catalyzing “a vibrant, deliberative community,” McMonagle said. This involves transforming the local democratic culture across the board from students to government leaders.

“We want to inspire similar change in communities across the state, nation and globally,” McMonagle said. “If we have achieved our goal, people will look at northern Colorado and say, ‘That’s the way democracy should work.’”