The Rocky Mountain Collegian • May 14, 2019 • https://collegian.com/articles/news/2019/05/show-us-the-money-csu-faculty-protest-for-living-wages/

“Show us the money”: CSU faculty protest for living wages 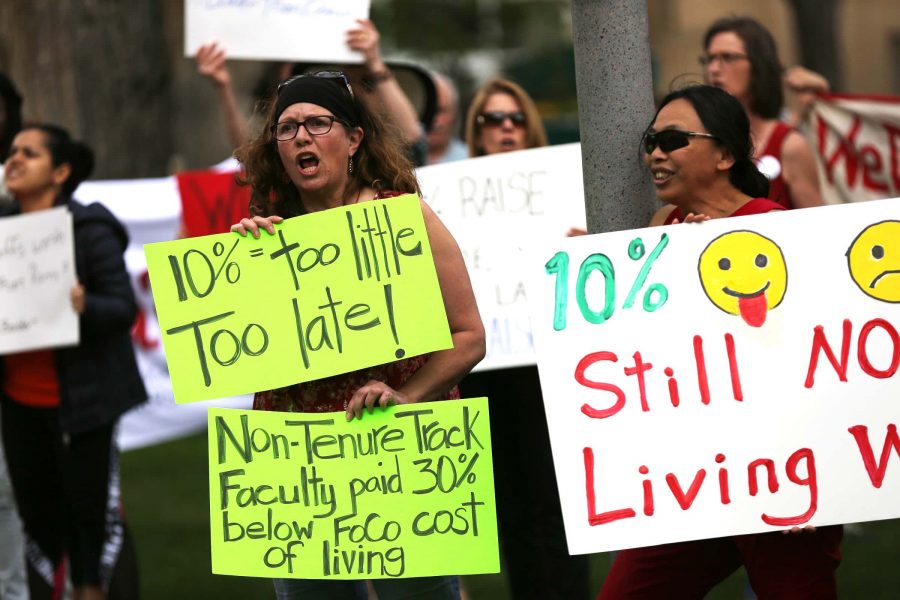 Deanne Seitz leads a chant while protesting with other faculty members outside of the Administration building May 13. Faculty members were protesting for higher wages and better job security. (Forrest Czarnecki | Collegian)

Faculty from Colorado State University rallied outside the administration building Tuesday while a closed meeting was taking place inside about the petition to increase non-tenure track faculty pay.

The protest was yet another push to get central administration to resolve the issues afflicting NTTF, namely the below livable wage and lack of fair compensation.

Protesters stood outside and moved around the building for 45 minutes before rain broke up the rally. Just like the proportion of NTTF, most of the protesters were women.

Donned in red, the color of solidarity for public educators, about 30 faculty chanted slogans such as, “Show us the money!” and “Too little, too late!” Many held signs bearing similar messages.

“I got my ‘Congratulations on 15 years at CSU’ letter last week, and I’m barely making enough to survive,” said Kim Spencer, senior instructor in the Journalism Department. “There’s no reward at the end for good teaching, and I think that’s the issue.”

In mid-April, a petition was launched by Dan Stephens, NTTF in the History Department, demanding the University implement a guaranteed minimum salary of $52,000 per year for all full-time faculty.

With over 1,200 signatures gathered, the petition was presented to President Tony Frank and Provost Rick Miranda by a mix of tenure and NTTF on Tuesday at the same time the rally occurred.

In an email to The Collegian, Mike Hooker, director of public affairs and communications for CSU, wrote that the meeting was to receive the petition, hear concerns and help all parties continue to work together toward improving compensation.

“I got my ‘Congratulations on 15 years at CSU’ letter last week, and I’m barely making enough to survive.”-Kim Spencer, senior instructor in the Journalism Department

Miranda and Vice Provost Dan Bush hosted a NTTF listening session last Friday where they shared some of the upcoming plans for NTTF policies. Those include a 10% raise for every promotion and a $45,000 base salary for full-time, terminal degree-holding NTTF.

“University leadership is considering all of the information gleaned through this extended discussion and expects to announce additional initiatives soon,” Hooker wrote.

A second listening session will be hosted in the fall.

The ideas presented at the session, however, fell far short of the demands of the petition, Spencer said.

“It was kind of a token, hoping, I think, to appease our desires rather than giving us what we were asking for in the petition,” Spencer said. “And it’s certainly not a living wage.”

The rally was organized privately without University resources, Spencer said. Done over the weekend, the rally purposely coincided with the petition meeting to bring continued awareness to the demands of the faculty.

These concerns are not a “flash in the pan,” Spencer said. Spencer anticipates more people will get involved over the summer as they increase outreach and the issue escalates.

While they are prepared to work with the new president, Joyce McConnell, the hope is for Frank to resolve the issue before leaving in July, Spencer said.

“You want to leave a strong legacy, not throw a problem into some incoming person’s lap,” Spencer said. “So, hopefully he’ll see the urgency.”

CSU faculty chanted outside the administration building where a meeting with President Tony Frank is taking place about the petition to give NTTF a living wage: https://t.co/FR9iJGBwU7@CSUCollegian pic.twitter.com/7qVpM6ZO4d

The grievances of the NTTF can be extrapolated from their chants.

The University of Colorado Boulder implemented an immediate $52,000 base floor salary for NTTF instructors in February, according to The Denver Post.

This action did not go unnoticed by their CSU counterparts.

“I think Boulder and Fort Collins now are very comparable in salaries and costs of living,” Spanish instructor Ana Fairchild said. “It would be nice if our salary raise reflected that.”

NTTF instructors are paid about $5,000 per three-credit course, which on an eight-course academic year brings in about $40,000 salary. Mean salary deviates from $43,406 to $77,967 depending on the college, according to a 2018 report from CSU’s Institutional Research, Planning and Effectiveness service.

One of the proposed plans from the Friday listening session is to institute a minimum salary for $45,000 full-time, 9-month, terminal degree NTTF. The amount will be raised incrementally over the next three years: $48,000 for fiscal year 2021 and $50,000 in fiscal year 2022.

This puts CSU “in a position to reach the median of our peer institutions, which is a benchmark for our Board of Governors in all issues of salaries and benefits,” according to an email sent out by Miranda to faculty.

Another proposed plan is to give NTTF a 10% raise for every promotion and an immediate 10% raise for Senior Teaching Appointments (re-ranked as Senior Instructors) this summer.

This proposal did not strike well with the rally attendees. 10% does not bring all wages up to cost of living levels requested, attendees said, and it is simply not enough at this point.

Courtenay Biser-Suarez, senior instructor in the Languages Department, said she trains teaching assistants who end up earning as much as her.

She has worked at CSU for over 20 years.

“My experience is not being valued,” Biser-Suarez said.

Salary compression is when there is little difference between employee salaries regardless of skills or experience. It was a concern brought up several times in the listening session, especially with the new price floor.

Fairchild, who has worked at CSU since 1990, said every time the minimum price floor has risen, she was bumped up to the new minimum and new hires would start out with the same salary as her.

NTTF teach 60% of undergraduate classes, according to a 2016 Collegian article. That role has a wide-reaching impact on all faculty, said Stephen Mumme, political science professor.

This may be especially true for TTF who are able to dedicate much time to research when NTTF teach basic courses, Mumme said.

Several other chants—“We love our students” and “Rams take care of Rams”—alluded to the extended impact of NTTF.

While progress has been made in longer term contracts and shared governance, the minimum $45,000 offer to NTTF is not only below the living wage of Fort Collins, but also far below what tenure-track faculty get hired at, Mumme said.

“These people are very qualified for the work they were hired to do, but they are not paid adequately.” -Stephen Mumme, political science professor

“Creating this multi-tier system of faculty and non-tenure track faculty is not a very good thing for education, our students and morale,” said Dimitris Stevis, political science professor.

Mumme and Stevis attended the rally bearing a banner from the American Association of University Professors, a nonprofit membership association of faculty and other academic professionals.

A number of CSU AAUP members are NTTF, Stevis said, and their demands are very reasonable so they are supportive of it.

“These people are very qualified for the work they were hired to do, but they are not paid adequately.” Mumme said. “So it’s really important that they have the financial support going forward.

“This is something the University can afford to do and can do and don’t let them tell you otherwise.”