The Rocky Mountain Collegian • May 9, 2019 • https://collegian.com/articles/news/2019/05/csu-community-honored-at-celebrate-colorado-state-ceremony/ 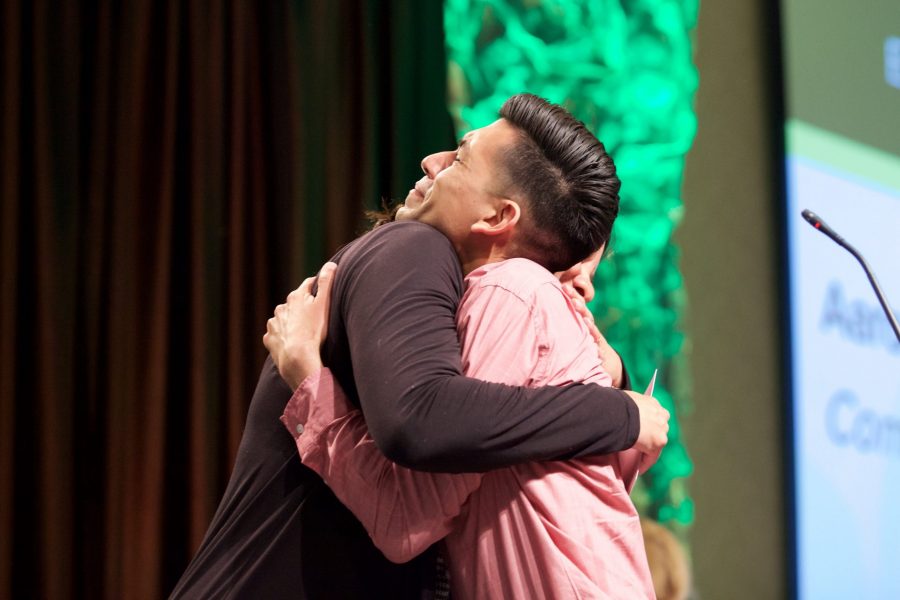 Aaron Escobedo wins the Enrollment and Access Distinguished Service Award in the LSC Grand Ballroom May 9. The Celebrate! Colorado State Awards focused on recognizing a wide variety of CSU faculty, staff and students for their accomplishments. (Ryan Schmidt | Collegian)

Professors, faculty, students and staff were honored for their achievements in research, teaching and service at the annual Celebrate! Colorado State awards ceremony Thursday.

Unable to attend the ceremony, Colorado State University President Tony Frank sent a video recognizing the achievements of the honorees.

Originally scheduled to take place on April 10, the awards ceremony was moved to May 9 due to weather conditions, according to SOURCE.

28 different types of awards were given to honorees, according to SOURCE. Five of these awards were amongst the most prestigious of CSU’s honors and included the Scholarship Impact Award, the BoG Excellence in Undergraduate Teaching Award and the titles of University Distinguished Professor, University Distinguished Teaching Scholar and Monfort Professor. Seven people received these awards and titles.

“I think a lot of getting this kind of award, especially if you’re older like I am, is to look for opportunities to uplift others and recognize them.” – Fred Haberecht, campus planner for CSU Facilities Management

After being named one of this year’s University Distinguished Professors, anthropology professor Katherine Browne explained how her studies in anthropology led her to commit to sharing her knowledge with others.

“It’s an auspicious time to be an anthropologist,” Browne said. “Disasters are increasing in scale and in frequency and impacting hundreds of millions of people every year. In my work, I’ve learned suffering that people experience is caused less by the natural hazard than by the social systems we create and reproduce.”

Campus Planner for Facilities Management Fred Haberecht received the Distinguished Administrative Professional Award and the Spirit of Philanthropy Award. One of two honorees to receive more than one award, Haberecht expressed how honored he felt and what message he thought the awards meant.

In closing, Frank expressed his gratitude towards the recipients in his last days as president of CSU.

“I can’t stand there on the stage today for the one last time as president of Colorado State University, but believe me when I say that I will always celebrate Colorado State and especially all of you,” Frank said. “Thank you and congratulations.”

The complete list of awards and recipients can be found on SOURCE.