The Rocky Mountain Collegian • May 12, 2019 • https://collegian.com/articles/news/2019/05/category-news-student-parents-raise-a-family-get-an-education/ 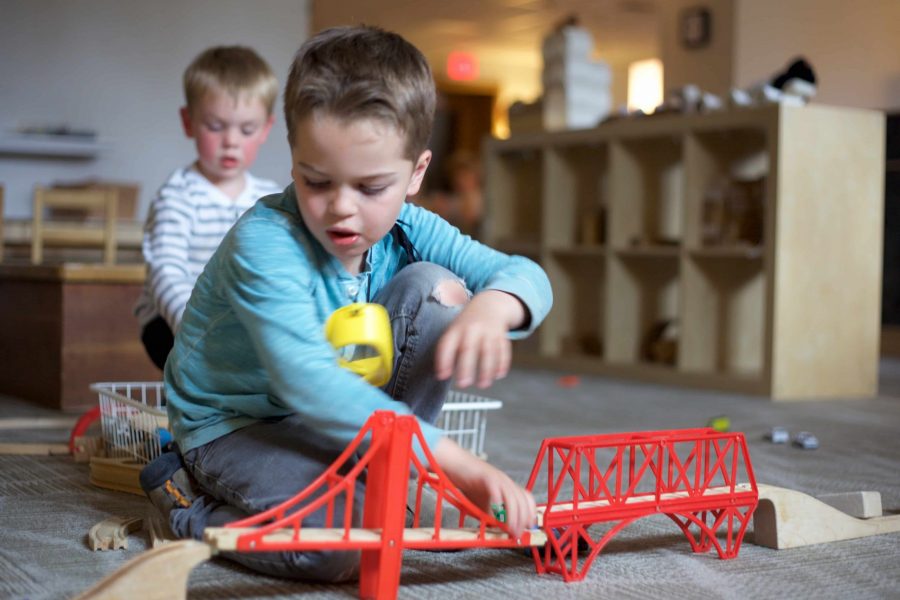 Kids play with a train set in Colorado State University's Early Childhood Center April 16, which is not a resource meant for student-parents. (Ryan Schmidt | Collegian)

Student-parents are facing challenges, both on and off campus, that traditional higher education is not designed for, and some professors aren’t understanding of.

Class schedules, attendance policies, campus activities and many study resources are largely built for traditional students who have a fair amount of flexibility, but student-parents must combine their studies with the needs and lives of their children, which restricts their ability to participate in their own education.

Priscilla Duron, a senior majoring in sociology, said having kids while in school restricts when she can take classes and whether or not she can study and participate in activities with her peers. She also said the cost of parking and attendance policies present challenges when her kids become sick.

Student-parents tend to be a group who are being successful, but that’s why we want to do the research so we can prove that.”

Systems like excused absence through doctor’s notes aren’t practical for Duron because her kids may not be allowed to go to school because they have a fever, but they aren’t sick enough to go to a doctor.

While she was a single parent during her undergraduate study, Victoria Benjamin, coordinator for victim advocacy at the Women and Gender Advocacy Center and a graduate student, found that resources available on campus, like Ram Kidz Village, didn’t fit her needs. Between studying and working multiple jobs to support her four children, Benjamin wrote in an email to The Collegian that she opted to study after full weekends of work or putting her kids to bed.

Benjamin also wrote that she wasn’t aware of many of the resources available to her until later in her education.

Lisa Chandler, assistant director of the Adult Learners and Veteran Services, said while many resources and structures are created with good intention, a comprehensive understanding of what student-parents actually need hasn’t yet been compiled.

Chandler said the University doesn’t have a solid understanding of how many students are parents. But, Chandler and Benjamin are part of a recently formed task force to analyze the population of students who are parents, caretakers and pregnant to create more effective programming.

“We’re hoping to initially do some thorough need assessment to then drive what programming we go forward in developing,” Chandler said. “I’m really excited…for all the potential we have for serving that student population and creating really dynamic programs that then can be an example for other universities across the nation.”

Benjamin wrote that experiences with resources who weren’t equipped to aid single parents or non-traditional students caused her to feel isolated from the University.

“It kind of reminded me that the University wasn’t really a place for me to belong,” she wrote.

Additionally, she wrote that other single-parents on campus face transportation challenges and hurdles to access support because they are international students, which also isolates them from support systems.

“The most important thing the University could do, however, is work to change the culture of higher education to be more inclusive of parents and non-traditional students,” Benjamin wrote.

Chandler said that is part of what she hopes the task force will do by creating awareness on campus of this population of students and presenting their value at the University and in the community, similar to the work the University did around the value-based model for student veterans.

“Student-parents bring a lot of skill sets that are assets for the community and the University,” Chandler said. “Student-parents tend to be a group who are being successful, but that’s why we want to do the research so we can prove that.”

Despite the challenges she faces raising children and studying in higher education, Duron said her kids have motivated her to complete her degree.

“I want them to see that going to school is important,” Duron said. “That’s been a big driving factor of keeping me in school even when it gets rough.”