The Rocky Mountain Collegian • May 1, 2019 • https://collegian.com/articles/news/2019/05/category-news-csu-professor-susan-bailey-works-on-nasa-twins-study/ 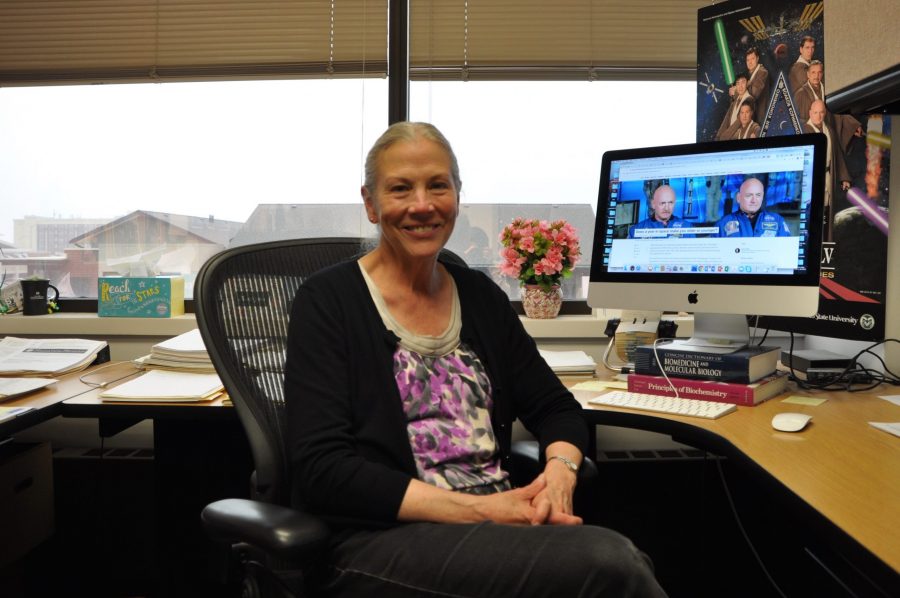 Dr. Susan Bailey, a Professor and Radiation Cancer Biologist in the Department of Environmental & Radiological Health Sciences, was one of many researchers who worked on NASA’s Twins Study. (Anna Montesanti | Collegian)

NASA is exploring further and further into the final frontier, and Colorado State University’s very own Susan Bailey is helping to lead the charge.

Bailey, a professor in the Department of Environmental and Radiological Health Sciences and a radiation cancer biologist, has been working with NASA as a part of their Twins study to research the effects space has on aging.

According to the official NASA Twins Study website, Bailey and her team were one of ten selected from around the country to answer the question of what happens to the body after spending one full year in space.

The study focused on two twin astronauts: Scott and Mark Kelly. Scott was the twin who spent a year aboard the International Space Station, while Mark, a retired astronaut, spent the year on Earth. Bailey noted how during the study, the twins were affectionately referred to as “Space twin and Earth twin” in an email to The Collegian.

In an article originally published in The Conversation, Bailey described how the Twins study is groundbreaking within the field. For the first time ever, “omics” based research, which studies the functions of genes and molecules, could be studied in astronauts.

Bailey and her team focused on telomeres, which she described as “the protective ends of chromosomes that shorten as we age, as well as with a variety of lifestyle stresses.”

In her email, Bailey explained how the twins began the study with similar telomere lengths, which was to be expected from two genetically identical individuals. However, that did not last long.

“Much to our surprise, Scott (Kelly’s) telomeres were significantly longer at every time point, and in every sample tested during spaceflight — exactly the opposite of what we expected!” Bailey wrote. “Furthermore, when Scott Kelly returned to Earth, his telomere length shortened rapidly, then stabilized during the following months to near pre-flight averages.”

Bailey went on to write that since his telomeres stabilized, he appeared to have many more short telomeres after spaceflight than he did before.

Now, the question becomes why does space affect telomeres, and how. Bailey explained that even though the study has ended there is still lots of work to be done. She also said that similar studies between unrelated astronauts and an earthbound partner have begun.

Bailey expressed how this small look into space’s effect on chromosomes provides great insight that is relevant universally.

“Together, our findings will have relevance not only to astronauts but to us earthlings as well, since we all grow old and develop age-related degenerative diseases.” Bailey wrote, “The hope is that results from these studies will provide new insights into the processes involved in such dramatic shifts in telomere length dynamics and thereby improve our understanding of what we might be able to do to extend health span.”