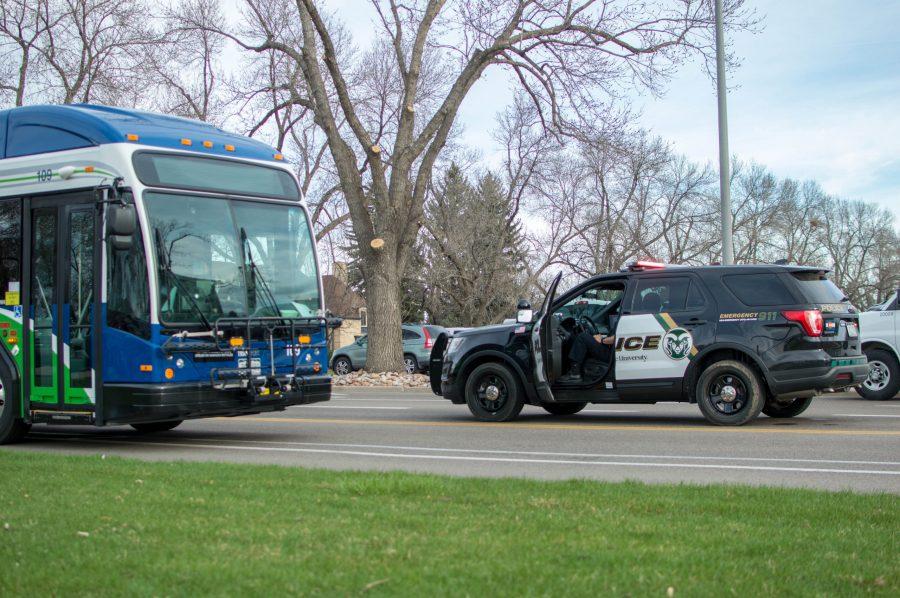 A police cruiser is stopped next to a Transfort bus that was involved in a collision on Plum St. Tuesday April 9, 2019. (AJ Frankson | Collegian)

A traffic accident involving two vehicles and a Transfort bus at the intersection of Plum and Shields has resulted in road closures and injuries, according to Fort Collins Police Services.

At 7:06 a.m., FCPS was notified that Hannah Shikh-Salim, 30, collided with a Transfort bus on the driver’s side while going south on Shields, according to a press release issued by FCPS.

During this collision, Shikh-Salim, driving a 2012 Toyota Sedan, also crashed into a 2005 GMC truck that was waiting in to turn left onto Plum.

Shikh-Salim suffered minor injuries but Transfort driver, passengers and driver of GMC truck were not harmed in the collision.

Risk and Public Safety Communications Manager Dell Rae Ciaravola said one of the drivers of the private vehicles has been transported to the hospital with reported injuries. There are no reported casualties.

The street was closed for approximately 4 hours, according to the press release.

At this time, FCPS do not believe alcohol or speed was involved in the crash. According to Kimble, the Fort Collins CRASH team is still processing the information.

Plum going Eastbound toward campus was closed for 4 hours while police investigated the incident. Police ask commuters to seek an alternate route this morning if traveling in the area.

The Public Safety Team reported the accident to the campus community at 7:43 a.m. Tuesday.

Dell Rae reported CSUPD initially responded to the incident, and FCPS is now leading an ongoing investigation. Closures are expected to continue for several hours.

This is a developing story. Stay with The Collegian for updates as new information becomes available.