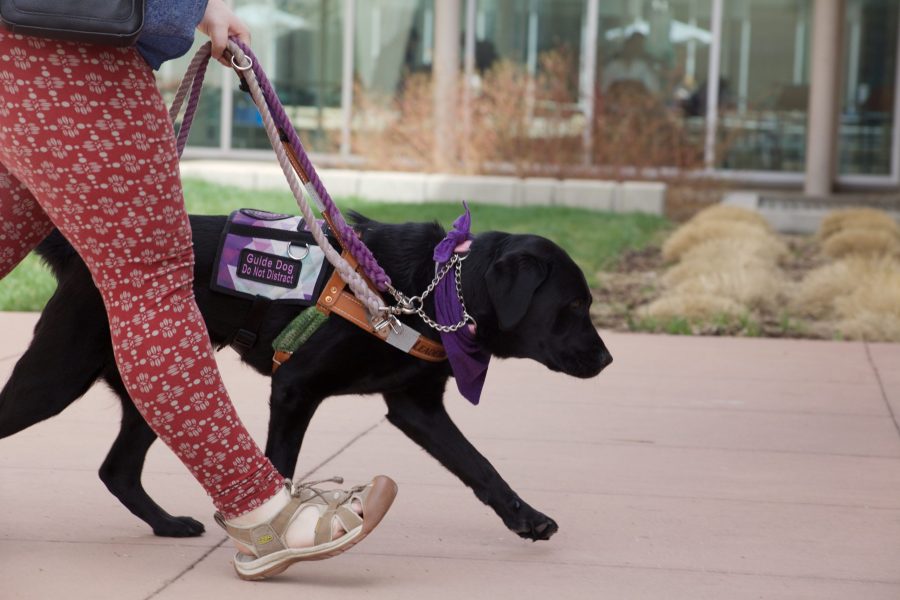 Iris the guide dog leading Cerridwyn Nordstrom into the LSC April 16. Nordstrom discussed how both fake service animals and people distracting guide dogs pose a great risk to the animal and hinder its ability to do its job.

Cerridwyn Nordstrom, Associated Students of Colorado State University senator and Vice Chair for the Women’s Caucus, recently passed a resolution through the Senate that would petition the Student Resolution Center to change their policy regarding dogs on campus.

The resolution would allow one to report out of control or aggressive animals, Nordstrom said. Students or faculty who bring those animals on campus could be cited.

According to the resolution, which passed this semester, the Student Resolution Center would be asked to allow for complaints and disciplinary action to be taken against CSU community members who bring “undertrained or purely fraudulent service animals” and pets, with a system put in place to promptly and efficiently handle such complaints.

Nordstrom said that in her five years of being on campus, she has noticed more and more people bring their pets to class and onto CSU’s campus.

“You have all of these dogs who are barking, out of control, and growling,” Nordstrom said. “When you bring those animals on campus it means that people like me, with service dogs, have to try and navigate our lives around you.”

It’s not fun to take a dog everywhere with you. I feel like a single mother 90% of the time. She keeps me from running into walls, I keep her from eating magnets…people who bring their pets with them have no idea what it’s actually like to rely on an animal all day.” Cerridwyn Nordstrom, Associated Students of Colorado State University senator and Vice Chair for the Women’s Caucus

Rose Kreston, director at the Student Disability Center, said that bringing dogs on campus can be dangerous to those who rely on service dogs to function.

“Dogs that are not service dogs aren’t trained to not be dogs, and when they meet a service dog they’ll act like a dog,” Kreston said. “We don’t want a dog that’s seeing-eye guide dog to be distracted because that dog could lead that person who is blind into dangerous areas.”

Nordstrom also said that bringing animals on campus, sometimes used as emotional support animals, has become a bit of a fad. She said that taking her own service dog, Iris, everywhere with her can be a bit of a pain.

“It’s not fun to take a dog everywhere with you,” Nordstrom said. “I feel like a single mother 90% of the time. She keeps me from running into walls, I keep her from eating magnets…people who bring their pets with them have no idea what it’s actually like to rely on an animal all day.”

Kreston said that emotional support animals are not the same as service dogs, and bringing them everywhere on campus can be dangerous.

“Emotional support dogs are not trained to do anything,” Kreston said. “Whereas a service dog is alerting that  person that they might be having a seizure, or is alerting that person they’re going to walk off a curb…it’s doing something.”

Nordstrom said that other dogs on campus can also pose a threat to service dogs themselves, not just their handlers. She said there are heavy consequences if an animal attacks a service dog and it gets injured.

“It took me four years to get a dog; I was on a waitlist for four years,” Nordstrom said. “If this dog gets attacked by another dog or something happens and she can no longer work, I’m going to be out a dog for potentially another four years. It puts a massive dent in disabled people’s ability to do their jobs.”

Nordstrom said that part of the University’s Student Code of Conduct says that everybody has the right to an included or unimpeded space, which includes disabled people.

According to 2018’s Student Code of Conduct, disruptive behavior is defined as engaging in behavior that disrupts or interferes with teaching, classrooms or other University functions.

Nordstrom said she believes the University is not upholding this part of the code.

“They’ve been asked multiple times to protect service dog handlers, and they refuse to do that,” Nordstrom said. “I see it personally as discrimination against disabled people. They are blatantly ignoring it and people are getting hurt.”

Right now, Nordstrom said, there isn’t a good way to report someone who has a disruptive dog on campus. Sometimes she’ll take a picture, but even that doesn’t do much.

“You need the person’s name,” Nordstrom said, “People won’t just give you their name.”

Melissa Emerson, the director at the Student Resolution Center, said that students who break the rules and bring fake service dogs to places they shouldn’t be could face consequences from the University.

“Let’s say a student has an animal, is in a classroom, and it’s being disruptive,” Emerson said. “We could charge them with violating the conduct code, and they may have to come in for a student conduct hearing. If found responsible, there could be a variety of options.”

Nordstrom said that she has personally been in dangerous situations because of dogs on campus.

“There was this big Dalmatian, we saw him two days in a row, and he was jumping and pulling on the leash that a teeny tiny girl was holding, she could barely hold on,” Nordstrom said.

Nordstrom said that it made her nervous because she had to stop and have Iris sit and wait for the other dog to leave.

It puts a massive dent in disabled people’s ability to do their jobs.” Cerridwyn Nordstrom, Associated Students of Colorado State University senator and Vice Chair for the Women’s Caucus

“Your dog is so distracting that my dog can’t even function, and she’s a fully trained dog,” Nordstrom said. “She was trained by an organization, this dog is flawless. The fact that she couldn’t even walk through the middle of campus without being distracted means that I have to take time out of my day to wait.”

The Dalmatian wasn’t a fake service dog, Nordstrom said, but she has seen multiple fake service dogs on campus. She said that there are a few ways you can tell, including if they have a lot of what appear to be certifications on their vests.

“In the United States, service dogs don’t have to be certified,” Nordstrom said. “Some guide dog schools give out ID cards…but it’s not a certification.” Nordstrom said that people can pay $50-100 for fake vests.

Behavior can be another tell. Service dogs are supposed to act a certain way in spaces that dogs aren’t usually allowed to be in, she said.

“Public access skills include things like not licking the floor, not barking, not being disruptive…they should basically be unnoticeable,” Nordstrom said. “It should be the best-behaved pet you’ve ever seen plus up a level.”

There are two questions to ask if people encounter potentially fake service dogs, Nordstrom said: if that dog is for a person with a disability and what tasks it’s trained to perform. Nordstrom said that illegitimate dog handlers won’t know what to say to these questions, or try to avoid them.

Nordstrom said she understands why people want to bring their emotional support dogs with them, but they really just need to stay at home.