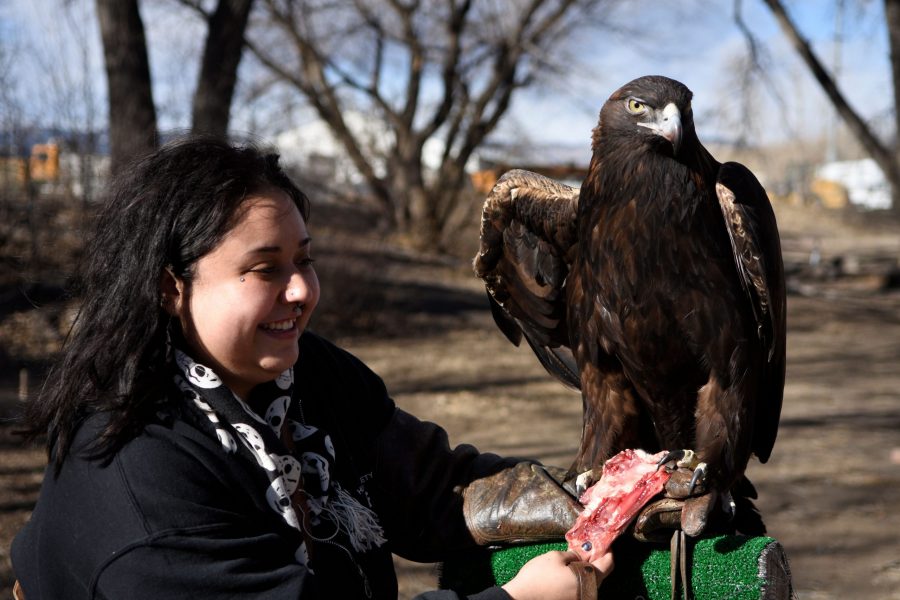 CSU alumni of zoology Jazmine Ruybal feeds a Golden Eagle. The eagle is one of the permeant residents at the Rocky Mountain Raptor Program and was admitted into their care in 1994. (Matt Tackett | Collegian)

The Rocky Mountain Raptor Program— a community-based team dedicated to rescuing and rehabilitating birds of prey— saw 338 sick, injured and orphaned raptors brought through their doors for help.

Consisting of 10 staff members, five senior staff, three junior staff, two hourly employees, 10-15 unpaid interns and around 100-120 volunteers, the RMRP has been around for 31 years with a goal to aid in avian care and rehabilitation.

There’s an increase of need for wildlife care and rehabilitation but also education and research to help mitigate injury and increase an understanding, respect and, hopefully, a change in action for wildlife by humans.”

Carin Avila, executive director of the program, said that, before 2018, the highest intake was 332 birds in 2009. Avila notes that this was an anomaly.

“In 2010, we took a hard look at how many birds were coming to us and (asked) ‘did they really need us?’” Avila said. “Many good samaritans that find these raptors are not wise on raptor behavior, avian development or what is normal for raptors.”

This resulted in Good Samaritan Education for the callers as well as Welfare Checks where the program would send out staff and highly skilled volunteers to assess the situation to see if the raptor in question needed to be brought to the facility.

“In 2010, only 271 raptors came to our facility with our new effort in Good Samaritan Education and Welfare Check,” Avila said. “However, from 2010 on, our admit numbers were on a steady rise. Our next high hit was in 2016 with 292 raptors.”

“For every day a bird is cared for by the RMRP, we consider it a bird care day,” the report said.

Avila said that, overall, populations of raptors in Colorado are doing well.

“We have a few species that are struggling, threatened or endangered but in general we do have great habitats,” Avila said.

Natural influences on population size can range from prey base and storms.

“Then you add in the human component,” Avila said. “The increase in new people moving into Colorado over the last decade has continued to boom with no end in sight. So the wildlife/human conflict will continue to rise as well.”

As the human population grows, habitat is lost, Avila said.

Another component is the rise in energy development on the Eastern Plains where there is great habitat for wildlife, Avila said.

“There’s an increase of need for wildlife care and rehabilitation but also education and research to help mitigate injury and increase an understanding, respect and, hopefully, a change in action for wildlife by humans,” Avila said.

Avila said that, unfortunately, there are birds that are not treatable or that die in transit.

“Some patients are so broken that surgical intervention by the skilled veterinarians at CSU cannot help,” Avila said. “Those birds that we cannot help are euthanized in accordance with our regulations set forth by the U.S. Fish and Wildlife Service and Colorado Parks and Wildlife.”

A small percentage of raptors that are not able to be rehabilitated can be placed as Educational Ambassadors with the RMRP or another licensed experienced education facility across the nation.

Volunteers at the RMRP have positions in raptor care, rodent colony care or administrative rules.

Volunteer Program Director and Assistant Director Lisa Winta said that it’s not a normal volunteer experience. There is a minimum of 10-12 hours of classroom training and roughly 100 hours of hands-on training that involves cleaning, nutrition and food preparation, record keeping and facilities upkeep, Winta said.

“All that training is achieved by a weekly commitment for a minimum of one year but the reward’s priceless,” Winta said.

The program focuses on rehabilitation, research and education and Avila said that they’re in the process of making a center that can do great work in all areas.

The aim is to open a nature center/zoological garden that is centric about raptors.

“We want a place to share our work with the public and the classrooms and the visitors to our great community,” Avila said. “We are beginning that process of planning now. When you soar with eagles you want to aim high!”