Fort Collins mayor up for election this April 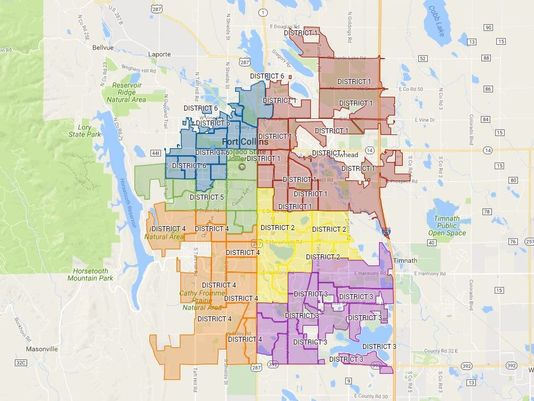 A map of the City of Fort Collins, divided by district. The blue section (top left) is district 6, the red section (top right) is district 1, with districts 5 (green), 2 (yellow), 4 (orange) and 3 (purple) following in that order. (Photo courtesy of Google Maps)

Voters have a choice between two candidates for mayor on April 2.

Ballots must be mailed out by March 28 or put in a ballot drop box by election day April 2.

Pruznick, outside of running for Fort Collins Mayor, is the Director of the Fort Collins-Loveland Water District and runs an online business called PruzLabs. Pruznick is running to encourage fossil fuel free homes, design neighborhoods to reduce crime, promote school funding in districts and the continuously improve Fort Collins as a community.

Through Pruznick’s goal to convert his home into a fossil fuel free home, he wants to eliminate the 120 percent rule with personal solar panels, where a maximum of 120 percent of the current annual use rate can be generated from solar panels.

“I believe in options, so it’s not about forcing everyone to go rooftop solar, but what I want to do is take down the barriers so people who want to go solar can,” Pruznick said.

In addition, Pruznick also wants to allow HOA’s to eliminate street parking and public sidewalks in order to reduce crime in neighborhoods, making uninvited people trespassers and deterring criminals from robbing that neighborhood, Pruznick said. This would also make housing more affordable by offering more housing in the same space.

“It’s a way in which we can recover the Green River Ordinance that the courts took away from us,” Pruznick said. “And I get, there’s going to be people on both sides of it, but I want to have these conversations.”

“Why I’m running is to bring this concept of continuous change to the government (and) to help facilitate this from a leadership point of view,” Pruznick said.

Having served on City Council for the last 12 years, Wade Troxell is now running for his third and final term as Mayor of Fort Collins. He plans on bringing a platform of community co-creation and engagement.

“Fort Collins is a special place to me,” Troxell said. “When I grew up here, I was able to see the type of leadership that made Fort Collins such a wonderful place to live today so I’d like to provide that kind of leadership for not only next year but well into the future.”

As Troxell describes it, he is not a “lone wolf” candidate and is very engaged with the community.

Troxell works at Colorado State University as an associate professor in the mechanical engineering department. A Fort Collins native, he served on City Council as the representative for District 4 for eight years and has been the City mayor for the last four years.

The “spirit of this election,” Troxell said, is that the solutions to challenges lie with the citizens.

His platform reflects this, from having the City support climate innovation from private businesses to making sure City regulations don’t hamper cost-efficiency in affordable housing and encouraging partnerships with nonprofit service providers for the homeless population.

“Everyone in Fort Collins, and that includes every student, faculty and staff member at Colorado State University, is an important contributor, a co-creator, in our community, and they should be engaged,” Troxell said. “And hopefully if they live in Fort Collins and registered to vote, they should vote. And I would hope they would vote for me.”

Samantha Ye and Julia Trowbridge can be reached at news@collegian.com or on twitter @samxye4 and @chapin_jules.