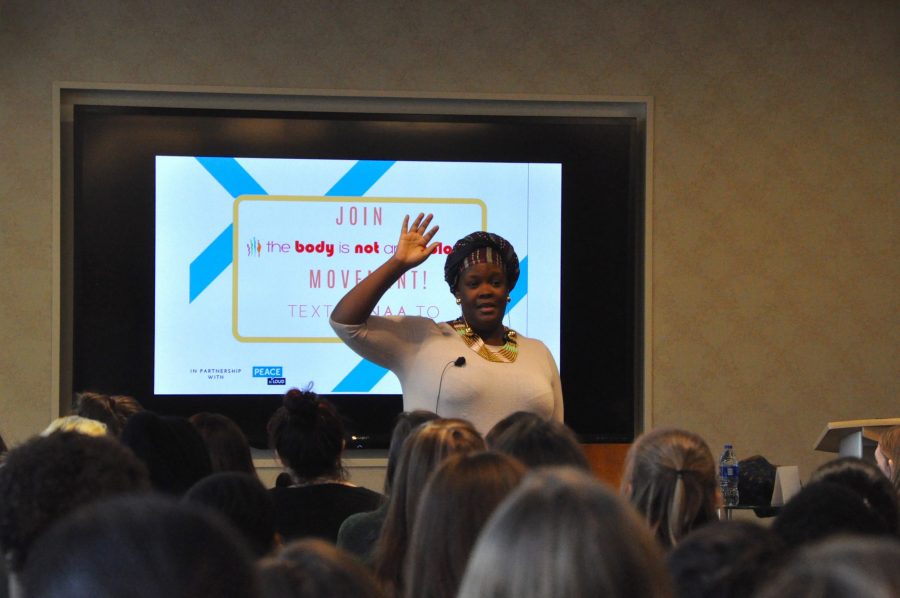 Sonya Renee Taylor, author of the book “The Body Is Not An Apology,” speaks to an audience in the Lory Student Center about her book and its theme of radical self-love. (Anna Montesanti | Collegian)

In a night that both started and ended with poetry, performance poet and activist Sonya Renee Taylor spoke about radical self-love Monday at Colorado State University.

Taylor — the founder and radical executive officer of The Body is Not an Apology, a radical self-love social movement and digital media and education company — organized her speech like a conversation rather than a lecture. Taylor said she wanted the connection and vulnerability of conversation and growth.

Taylor began the event by defining self-love as entirely separate from self-confidence with a political reference to President Donald Trump in response to an audience question.

“The Donald is not struggling with his sense of self, even if the rest of the world is,” Taylor said. “Even if we were to surmise that Trump and others like him are acting from an exaggerated lack of self-confidence, I think we can agree not much of their attitude or actions feel like love.”

For those looking for a place to start their journey back to self-love, Taylor said to look to children.

“We didn’t just accept ourselves when we were kids. We loved ourselves. We were delighted by and inspired by our own being,” Taylor said. “We can get back to that.”

After an audience member asked what exactly self-love looks like, Renee Taylor explained that most people find their self-love by finding their power, but made a distinction between people in their own power and people who have power over others.

Jovan Rivera-Lovado, fifth-year student aid for the Women and Gender Advocacy Center, explained why the center brought Taylor to campus.

One of the major points of discussion for Taylor was the interaction between self-love and the institutions humanity has created and continues to uphold.

We didn’t just accept ourselves when we were kids. We loved ourselves. We were delighted by and inspired by our own being. We can get back to that.” Sonya Renee Taylor, the founder and radical executive officer of The Body is Not an Apology

Taylor also emphasized the process of unlearning biases. She likened learned prejudices to being immersed in a language like French. She went on to explain that people are not at fault for the languages of prejudice they have learned, but that it is their job to unlearn them.

Taylor said she encourages people to reach out to others and utilize their support system as well as whatever resources are available to them.

At the event, the WGAC gave out complimentary copies of “The Body is Not an Apology” through the CSU Bookstore to anyone with a student ID. A 20 percent discount was given to non-students.

Rivera-Lovado said he encouraged people originally turned off from the idea of radical self-love to reconsider.

Taylor was a performance poet for 14 years prior to the movement, so she began and ended her speech with slam poems she had written. The second poem, “The Body is Not an Apology,” was the original spark for Taylor’s worldwide movement.