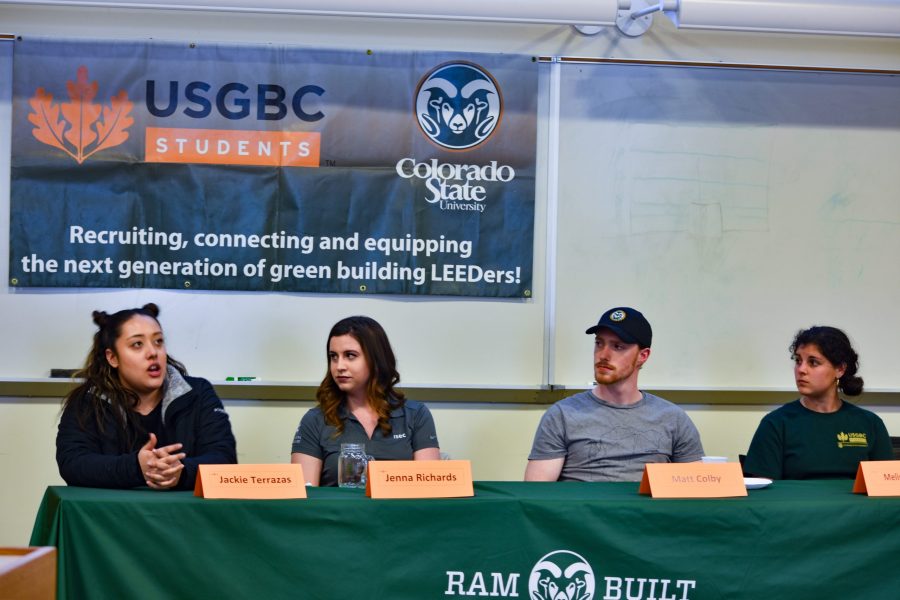 Jenna Richards, Matt Colby, and Melissa Browne, look to Jackie Terrazas as she recounts her experience in the preconstruction student panel on March 26, 2019. (Alyse Oxenford | Collegian)

Construction wasn’t the only topic that came up during a recent construction management education abroad panel; life experiences and stories from abroad joined the conversation.

The U.S. Green Building Council held a panel Tuesday in the Preconstruction Center where four panelists discussed their experiences studying construction management abroad. Students gathered to learn about the various education abroad opportunities and where to go from there.

The former Colorado State University student panelists shared stories from their sloth sightings in Costa Rica, to getting pickpocketed in South Africa, to finding friends with the same passion as them.

Jenna Richards, who was part of the sustainability buildings program in Costa Rica, discussed the varying perspectives on sustainability.

“Sustainability is just part of (Costa Ricans) life, versus here where it’s like you almost have to kind of force it,” Richards said.

Richards said not only did she gain valuable skills, such as when she built a lookout made of mud and sticks, but she and the other panelists learned about different cultures and learning styles. She also gained an appreciation of how other countries manage construction.

“They didn’t have the things that we have here that make things so much more easier to work,” said Jackie Terrazas, who spent time in Costa Rica, San Jose and San Salvador.

Between the panelists, they said they were taught discipline through attendance, how to adapt in a foreign country, how to be uncomfortable and OK with it and to always wear a money belt.

“I learned how to work with people, how to work in society,”  said Erik Hohman, the moderator who studied in Barcelona. “Every project that you go on, it’s going to be a new team and there’s going to be unknowns.”

Despite the language gaps and nostalgia for home, all the panelists agreed on one thing: their time abroad was irreplaceable.

Holly Murfey can be reached at news@collegian.com or on Twitter @hollymurfey.