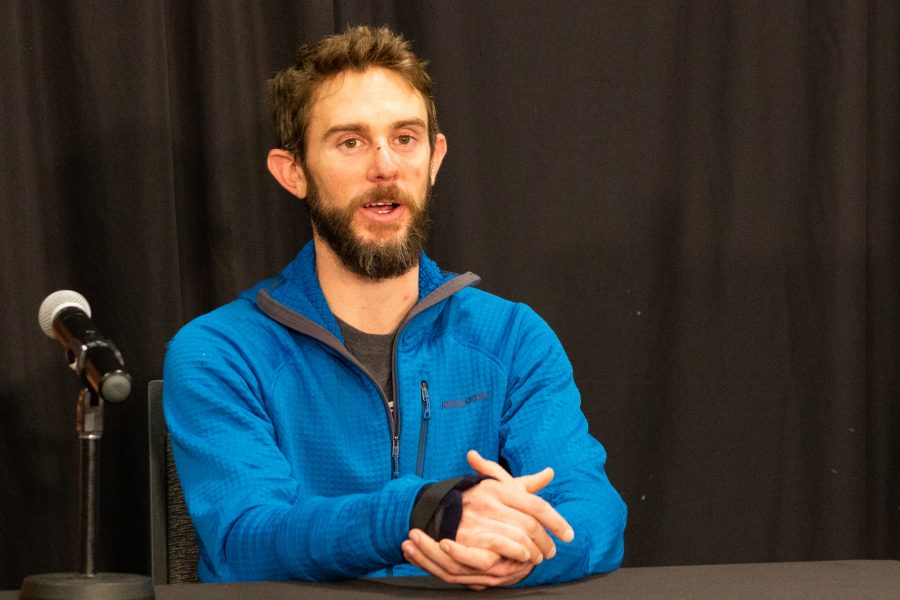 Travis Kauffman, 31, made his first public appearance ten days after surviving a mountain lion attack by strangling it to death in self-defense. Kauffman addressed a number of media outlets at the Hilton Hotel on West Prospect on Feb. 14, and talked about the attack as well as his life going forward. (Austin Fleskes | Collegian)

Ten days after strangling a mountain lion to death in self-defense, Travis Kauffman, 31, made his first public appearance in good spirits, wearing the same jacket from the day of the incident, at a limited access press conference Thursday.

Kauffman was attacked by a juvenile mountain lion while trail running in the Horsetooth Mountain Open Space Feb. 4. When the mountain lion attacked, Kauffman was bitten on the face and wrist before strangling the predator to death in self-defense by stepping on its neck after wrestling it to the ground.

“Right when I turned and saw it, it was definitely disbelief (I felt,)” Kauffman said. “The shock of the situation and the fear and finally the instinct to fight, it was kind of that trajectory that those emotions followed.”

Kauffman is originally from Mountain Home, Arkansas, and is currently residing in Fort Collins. He has lived here for five years and works as an environmental consultant.

Ty Petersburg, area wildlife manager for Colorado Parks and Wildlife, commended Kauffman before he came out to speak, saying that he had done everything just right.

“I want to recognize Travis. It’s an incredible story and he’s a pretty amazing young man with a warrior’s heart,” Petersburg said. “It really was a fight for survival.”

He ran along the South Valley trails and linked up with Horsetooth Mountain Park. From there he ran the Towers hill and hooked up with another trail to the south and eventually went to Westridge trail, east of Towers.

About a quarter mile into the run down Westridge trail, he heard some pine needles rustle and a stick break behind him.

“I turned around and just was pretty bummed out to see a mountain lion chasing after me,” Kauffman said.

He threw his hands up into the air and yelled to try and deter it, but the lion lunged at him, latching onto his wrist.

“I was just kind of screaming the whole time, doing my barbarian yell as best I could,” Kauffman said in a video interview with CPW Monday.

Eventually, Kauffman and the mountain lion tumbled down the south side of the trail into what he called a “wrestling match.” He was able to pin its back-legs and tried to fatally stab the lion in the neck with sticks. When this didn’t work, he managed to grab a rock and hit it in the back of the head a few times, but still wasn’t able to kill it.

“At that point, I knew … I was probably going to have to do something a little more drastic,” Kauffman said “I was able to shift my weight and get a foot on its neck and … after a few minutes I thought I would be getting close and it would start thrashing again. Another couple minutes later it finally stopped moving.”

Kauffman was able to pull his wrist free and scramble back up to the trail.

“I just kinda had that wave of fear roll over me and thought that I could just end up there and stay there,” Kauffman said. “And luckily that wasn’t the case.”

Kauffman then ran another three miles until he came across another trail runner, who ran with him until they bumped into two more people. One of the individuals then drove Kauffman to the hospital while another brought Kauffman’s truck so he could have his belongings and contact his family.

It’s an incredible story and he’s a pretty amazing young man with a warrior’s heart. It really was a fight for survival.”

In the attack, Kauffman did not sustain any broken bones or tendon damage but required over 20 facial stitches as well as wrist stitches. He continues to suffer from swelling, causing him to have limited motion. He also sustained contusions and puncture wounds to the neck and legs, none of which required any stitches.

Kauffman was treated at Poudre Valley Hospital, where he said “Their stitches were top notch.”

Annie Bierbower, Kauffman’s girlfriend, attended the conference with him and said that when she picked up his call she wasn’t sure if he was serious.

“There was a level of confusion and we didn’t really talk on the phone much after that,” Bierbower said.

She then rushed to the hospital, which she said was the scariest part of the day. When she arrived, she found Kauffman being wheeled into his room.

“I remember saying (to the nurse) ‘Can I kiss him?’” Bierbower said.

According to a necropsy conducted by CPW, the mountain lion was estimated to be “approximately 4-5
months old based on tooth eruption.” The estimated weight of the full carcass, prior to scavenging, was 35-40 pounds.

The lion was also tested negative for rabies.

Leslie added that encounters like this are a reality for all Coloradans, especially those that partake in outdoor activities. Horsetooth Mountain Open Space was closed on Feb. 5 after increased mountain lion activity in the area was recorded. Two mountain lions in the area were moved to a rehabilitation center. Horsetooth Open Space has since been reopened.

Kauffman said that he has not been deterred from trail running and still plans to even run the Dirty Thirty trail run, even though he said “This week, (training) got set back a little bit.”

Kauffman’s advise to trail runners in the future is to run with a buddy as well as to not wear any earbuds. He said that if he had been wearing earbuds he never would have heard the pine needles rustle behind him and wouldn’t have been able to fight back.

Kauffman is glad that he will be able to spend Valentine’s day with his girlfriend but said that he hasn’t really been able to do much planning.

While some news outlets had dubbed him “King in the North” before his name was released, Kauffman isn’t sure that he can live up to the name of Rob Stark himself.

The King In The North! https://t.co/FBLGX7TjcO

“I think that is going to be the hardest part, because I will never be able to live up to the expectation,” Kauffman said with a laugh.