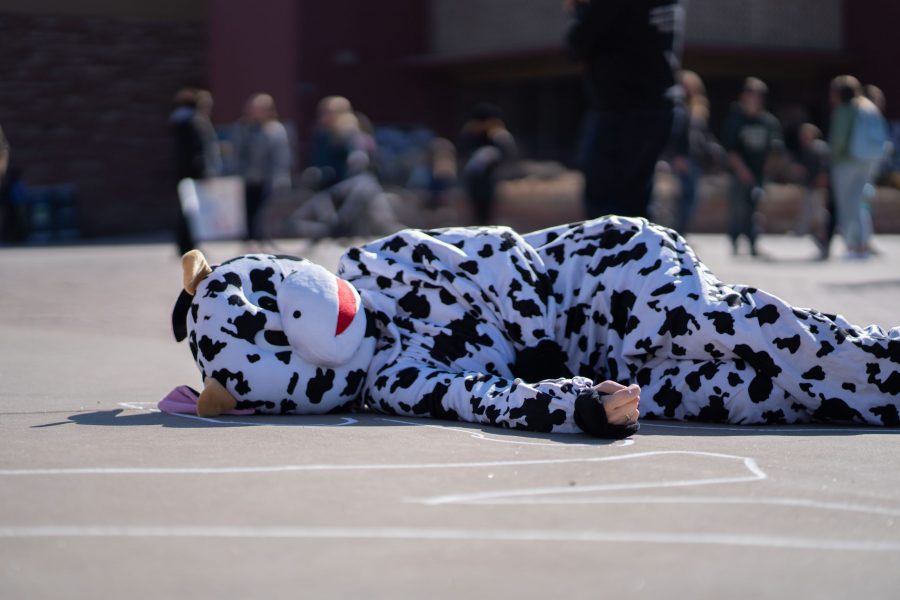 a collaboration of multiple animal rights groups protests against JBS Global Food Innovation Center and animal cruelty at the LSC Plaza on February 15. They will be p[rotesting at the slaughterhouse later in the afternoon. (Nathan Tran | Collegian)

Animal processing on campus is being protested yet again.

Logistics Coordinator Ora Goldman organized the protest on behalf of CALF and the Save Movement, an organization that raises awareness of animal abuse.

“What we’re here to ask is whether oppressing other beings… (is) in line with our values,” Goldman said.

Protesters dressed in animal costumes accompanied by others in animal masks. Those in cow costumes laid on the ground, outlined in chalk. Masked demonstrators had TVs strapped to their chests as graphic content from inside meat processing facilities played.

Colorado State University has been awarded one of the most sustainable campuses twice according to SOURCE.

Because of the University’s environmental efforts, protesters were questioning the alignment of CSU’s values in correlation to the meat industry and their partnership with JBS USA.

Sophomore conservation biology major Ayaka Paul expressed her thoughts on the CALF protest and the slaughterhouse itself.

“I don’t really know too much about the slaughterhouse or anything that goes with it,” Paul said. “(But,) without protest and without bringing it to the public eye, how can anyone know about it or form an opinion?”

JBS USA partnered with CSU to build the new Food Innovation Center, donating $12.5 million dollars to the $20 million dollar project in 2017. Of the donation, $7.5 million went to construction, and the remaining $5 million is allocated to an employee-education program.

However, some activists and students on campus are against the meat processing facility, in part due to JBS USA’s alleged illegal activities.

Two years ago, JBS USA founders Wesley and Joesley Batista were arrested after a corruption scandal involving the bribing of Brazilian officials to allow tainted meat on the market, according to the New York Times.

However, CSU Director of public affairs and communications Mike Hooker said calling the facility a “slaughterhouse” is an inaccurate statement because animal processing is only a small part of what the building will be used for.

“This facility is designed to the highest industry and research-proven standards,” Hooker wrote in an email to The Collegian. “We believe this facility is crucial for CSU students and faculty as a land grant institution.”

Last spring, University students were outraged at the prospect of the facility being built, which resulted in a petition with over 60,000 names signed against the meat-harvesting facility.

Major themes throughout the protest were the importance of veganism, sustainability and complete animal liberation. Victoria Wylde, community member and animal activist for CALF, briefly explained why veganism is not as costly as many people believe.

“Meat has always been an indication of wealth,” Victoria Wylde said. “To me, eating a heavily meat-based diet, like the standard American diet, is expensive. The only reason you can buy chicken for $2 a pound is because the government subsidizes it.”

“I feel like (the protest) gives a negative perception of how they see the animal science as a whole,” Delao said. “I think they’re giving false information saying… ‘JBS doesn’t treat their animals right and abuses them.’ If anything, being an animal science student who has actually been there several times… they actually do care for their animals and not just treat them like a dollar menu (item) from McDonalds.”

Victoria Wylde expressed her views on the controversy surrounding the facility.

“This is supposed to be a safe space for learning and education here, and I don’t really understand how you can combine a safe space for educational learning with something that is so horrible and horrific,” Victoria Wylde said. “Slaughterhouses are going to be built, but if we’re silent about it, we’re complicit.”

After the protest, the demonstration moved to the JBS meat processing facility in Greeley to hold a vigil.

Julia Weingardt, a CSU alumna and CALF member, expressed the purpose of the veganism movement and their protest on campus.

“In terms of animals, we’re not trying to show them as similar to people, but in their capacity to suffer, we are all the same,” Weingardt said.

Meagan Stackpool and Laura Studley can be reached at news@collegian.com or on Twitter @MeaganStackpool and @laurastudley_.