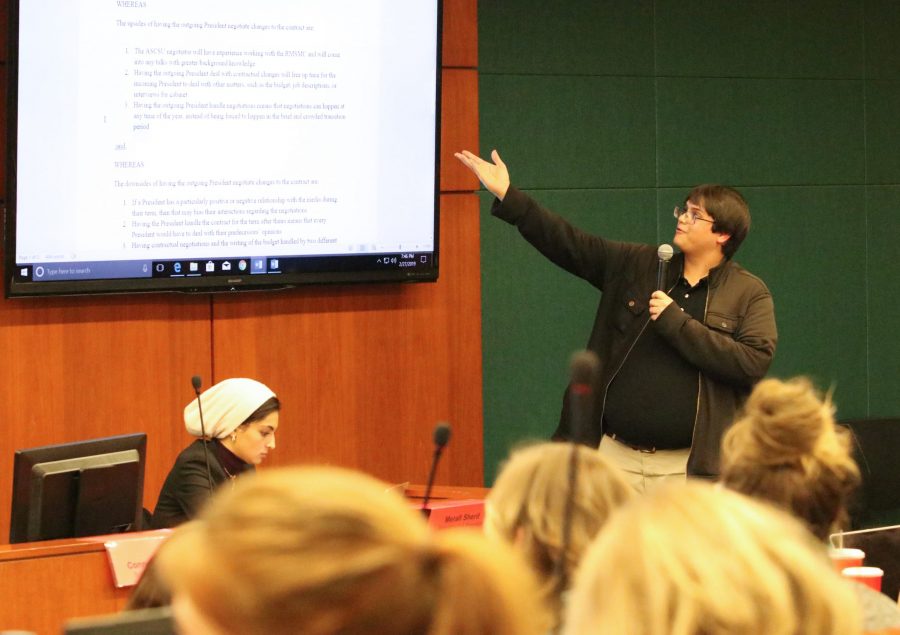 Chief of Staff at ASCSU and author of the Rocky Mountain Student Media Corp.(RMSMC) Resolution Zachary Vaishampayan asks the senators to consider whether they support the outgoing president of ASCSU to negotiate the contract with RMSMC. (Anna von Pechmann | Collegian)

One resolution would support the outgoing ASCSU president renegotiating the body’s contract with the Rocky Mountain Student Media Corporation. The other would change the contract through which ASCSU purchases physical copies of The New York Times to purchasing digital copies. Both resolutions were presented by the office of President Tristan Syron to seek the opinion of the ASCSU Senate.

ASCSU Chief of Staff Zachary Vaishampayan also presented a resolution supporting a change which would end the delivery of The New York Times to campus and replace it with access to the digital version for anyone with a CSU email with the domains “colostate” or “rams.colostate.”

The move would change the contract through which ASCSU purchases the paper from USA Today to The New York Times themselves, who have ensured the cost would not change, Vaishampayan said.

“Instead of getting about 200 copies of The New York Times for the entire campus, we’d technically get 30,000,” he said. “You would think it would be cheaper, but you’re getting more copies at a reduced price.”

While Syron technically has the power to make the change without the support of the Senate because it would be cost-neutral, the president would not go forward with negotiations if they were to reject the resolution, Vaishampayan said.

The bill was sent to the Committee on University Affairs.

The resolution, written and presented by Vaishampayan, sought the Senate’s support or opposition to allow the outgoing president to negotiate the contracts with RMSMC.

The contract is fully negotiated every three years and often has small portions discussed every year, Vaishampayan said.

“Traditionally, the incoming ASCSU president, fresh off of winning their election, will be the ones negotiating any contractual changes,” he said. “This has been noted to be problematic because they also have a lot of other things to do during that transition period. This would take one of them away.”

The resolution contained both the words “supports” and “opposes” so the Senate can amend the resolution as they see fit.

Peter Waack, president and CEO of RMSMC, spoke briefly about the stress that negotiating the corporation’s budget after the new president is elected.

“It’s the budget of Rocky Mountain Student Media, with a lot of input from student media leaders in The Collegian, CTV, SVP, KCSU, advertising, marketing, you name it,” Waack said. “The 350 students and their leaders help me put the budget together for the next year, and it is just an incredibly stressful time to try to pack that it all into two weeks.”

When the resolution went into discussion and debate, a motion by Sen. Ethan Burshek to remove the word “opposes” from the resolution failed. Burshek said he supported the outgoing president conducting the negotiations, and because of this, wanted to amend the resolution to make it so that a vote in-favor would “support” the resolution.

The resolution was sent to Budgetary Affairs and Internal Affairs committees and will be discussed in Senate again next week.