State of the City emphasizes community as key to city growth 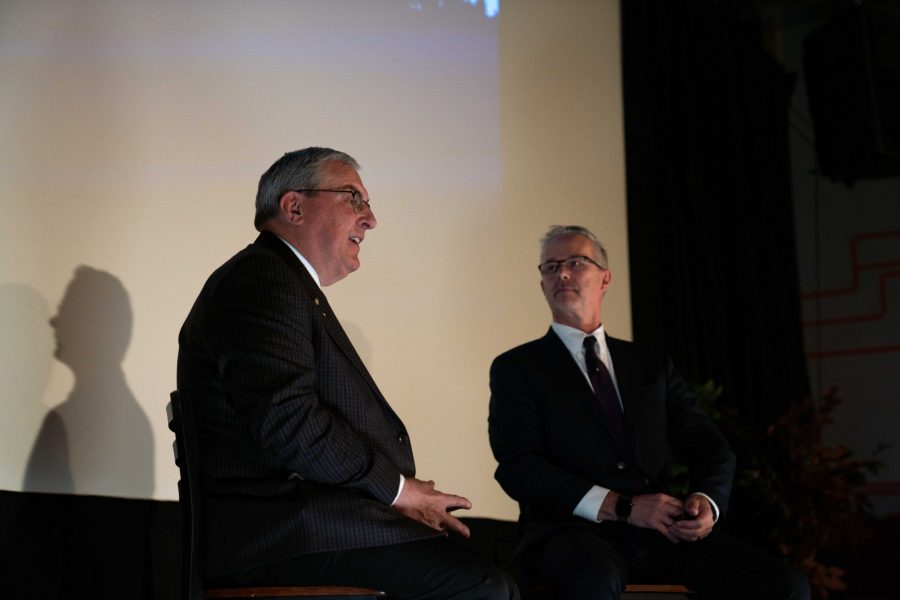 Through a short and positive film aired on The Lyric’s big screen, community leaders in a variety of fields delivered updates on their shared accomplishments with the city. From working on the Climate Action Plan to the strides made through the Community Trust Initiative, residents spoke of an attentive government, an engaged public and mostly, the power of community.

“What is the state of the city?” said City Manager Darin Atteberry. “I think the movie speaks for itself.”

The optimistic feelings carried through the rest of the evening which comprised of a Q&A session with Atteberry and Mayor Wade Troxell. City residents submitted questions before the event. They covered several major areas of citizen concern including affordable housing, the rollout of Connexion City broadband and equity and sense of place in Fort Collins.

There’s a lot of issues we’re not failing to see and recognize and trying to address.” -Darin Atteberry, City Manager

On the question of affordable, entry-level housing and U+2, the contentious ordinance prohibiting more than three unrelated people from living together in one household, both Troxell and Atteberry emphasized cooperation between the City and the private sector who build the housing.

“Affordability is not something the City can do alone,” Troxell said, while also acknowledging the ways government does make a difference in housing. He referenced the results of the recent U+2 study which showed the ordinance likely contributes to affordability issues for students and non-students alike.

The study was partially funded by the Associated Students of Colorado State University.

Rosenthal said the combination of several City Council members acknowledging the study’s results earlier paired with the Mayor bringing them up again tonight was “very encouraging.” It seems “the City is starting to understand” the widespread needs for affordability instead of treating it on a case-by-case basis.

“There’s a lot of issues we’re not failing to see and recognize and trying to address,” Atteberry said of the areas the City could grow in. “I love the idea of (how) in some cases, we’re taking small baby steps—in some areas we’re not so good at—but we’re trying really hard, we’re trying to learn and listen and then be responsive to.”

The event centered around using community engagement to provide decisive planning and growth of the city in every facet from equity to recreation.

When something happens in the city, it affects students; it affects long standing community members; it affects City Council.” -Yuval Rosenthal, ASCSU director of community affairs

The Lyric and City staff estimated up to 280 residents in attendance as a well as a number of government representatives.

“When something happens in the city, it affects students; it affects long-standing community members; it affects City Council,” Rosenthal said.

Syron noted that while he came into office thinking he would have to adamantly defend the students from the City, he quickly realized “everybody’s interests are the exact same.”

“How we get to the end results might vary a little bit but that’s what’s great about Fort Collins, is we’re all fighting for the same thing,” Syron said.

Syron added what meetings like this mean to the city.

“It’s a night like tonight that reminds you why Fort Collins is so great,” Syron said. “Because we can all come together and enjoy and talk about the successes the city’s had and our improvements for the future, and I think the best part is we can drink beer and get along for a night.”