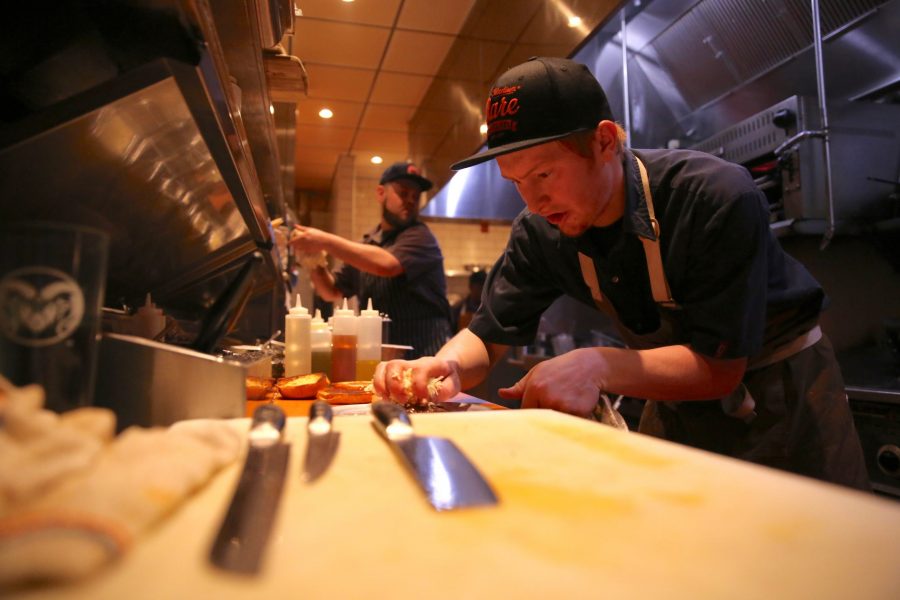 Nicholas Lobato, a line cook at Nick's Italian restaurant, puts the finishing touches on a meal on the night of Jan. 23. Nick's was holding an event where federal employees could receive a free meal with a valid government ID. (Forrest Czarnecki | Collegian)

As the federal government shutdown entered its 33rd day on Tuesday, Nick’s Italian on South College Avenue offered a free dinner for furloughed federal employees and their families, as long as they could show their government ID.

“We just wanted to give federal employees a bit of respite from not having a job for a while and just have them come in and have a little fun with their families and have some dinner,” said Nick’s co-owner Nick Doyle. “We just wanted to do something for these folks.”

Doyle said the idea came when the restaurant’s executive chef, Brian Shaner, approached Doyle and his business partner about doing something for the federal employees who have been without pay for over a month. He said the idea to offer free meals, in particular, came from a story he heard about a famous Washington D.C. chef, Jose Andres, feeding federal employees.

“We almost were thinking on Monday, ‘what if it’s kind of a dud? What if nobody really sees it?’ But the word spread like wildfire and we sold out the whole restaurant in a matter of 24 hours.” Nick Doyle, co-owner of Nick’s Italian.

“We really appreciate Nick’s doing this,” said one anonymous federal employee who came to eat with his young daughter. “We’ve had to cut down on going out, so this is a real treat. What a great thing to do.”

The entire event was planned and announced through Nick’s social media on Monday.

“We almost were thinking on Monday, ‘What if it’s kind of a dud? What if nobody really sees it?’” Doyle said. “But the word spread like wildfire and we sold out the whole restaurant in a matter of 24 hours.”

Doyle said around 140 federal employees and their families made reservations for Tuesday night, taking up more than 75 percent of their capacity and filling the restaurant for most of the night.

Although the exact number of affected federal workers in Larimer County is unknown, previous reports from the Coloradoan estimated there were about 2,600 in 2013.

New Belgium Brewing Company donated a keg, Doyle said, and a number of other individuals and groups reached out to see how they could help. Because of the short notice, much of the offered help could not be used, but tentative plans for an off-site buffet style event with other restaurants have been discussed if the federal shutdown continues for an extended period of time.

Nick’s gave the free meals to the federal employees and their families as a donation to the community, Doyle said, and didn’t know what to do with the offered financial donations from those supporting the event.

“It was a bit overwhelming, the response that we’ve gotten and the thank you’s that we’ve gotten, and a lot of people wanted to know how they could help out,” Doyle said. “We’re just doing the right thing and helping the community.”