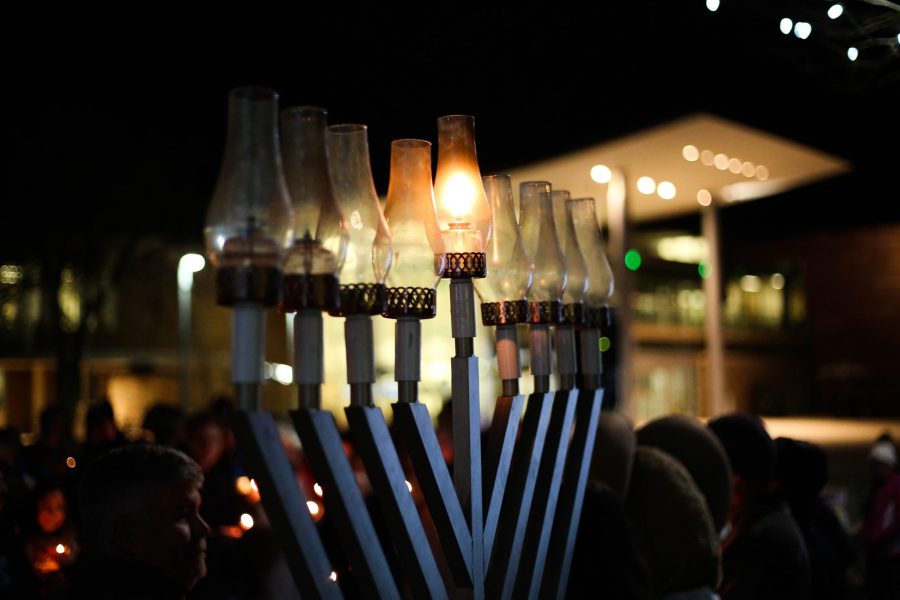 The Menorah is seen after being lit outside the LSC on the Plaza on Nov. 3. (Tony Villalobos May | Collegian)

Students of Colorado State University and community members of Fort Collins gathered in the Plaza to celebrate Chanukah and share the message that good will always triumph over evil.

Sponsored by the Chabad Student Jewish Organization and the Associated Students of CSU, the annual menorah lighting took place Monday night and featured many prominent guest speakers, such as Rabbi Yerachmiel Gorelik and CSU Police Department Police Chief Scott Harris. Representatives from the University’s Jewish sorority and fraternity were also in attendance.

President Tony Frank was unable to attend and sent the University’s mascot, Cam the Ram, in his place.

This year, my hope is for everyone’s inner menorah to shine and illuminate our actions”

Convissar thanked the Lory Student Center for hosting the event, as well as ASCSU for co-hosting. She also said that it’s important for the campus to be able to celebrate every holiday during the holiday season, and for students to remember that this season includes more than Christmas celebrations.

Syron agreed with the sentiment of diversity for the community and the importance of such an event.

“Events like this are important. It’s important to focus on bringing and maintaining this diversity for the community,” Syron said. “And, in the end, we’re all Rams.”

The menorah lighting has been an important celebration on campus for over a decade, Umans said.

Harris spoke near the beginning of the ceremony to discuss security issues on campus and to ask students for suggestions on how to best help them feel safe.

“Here at CSU, we have a saying that Rams take care of Rams,” Harris said. “At the police department, we have our own saying — Rams protect Rams.”

Rabbi Gorelik, faculty advisor for Chabad and director of the Rohr Chabad Jewish Center of Northern Colorado, focused on the meaning of Chanukah and its message that one can always prevail over darkness.

The lighting of the menorah, Gorelik said, symbolizes that people may believe they are facing the darkness but, ultimately, the power of the light overcomes.

“Now, more than ever, this message is so important,” Gorelik said, adding that one of the meanings behind Chanukah is education and this should teach people what to do. “It reminds us of a higher purpose in life. What does it mean to be a good human being? This year, my hope is for everyone’s inner menorah to shine and illuminate our actions.”

During the ceremony, Gorelik spoke of the 11 victims of the Pittsburgh synagogue shooting and said he wanted to use the night to honor those 11 souls.

For the lighting of the menorah, those gathered were provided with candles and matches to light while Mike Ellis, LSC director, lit the shamash — the center candle used to light the others.